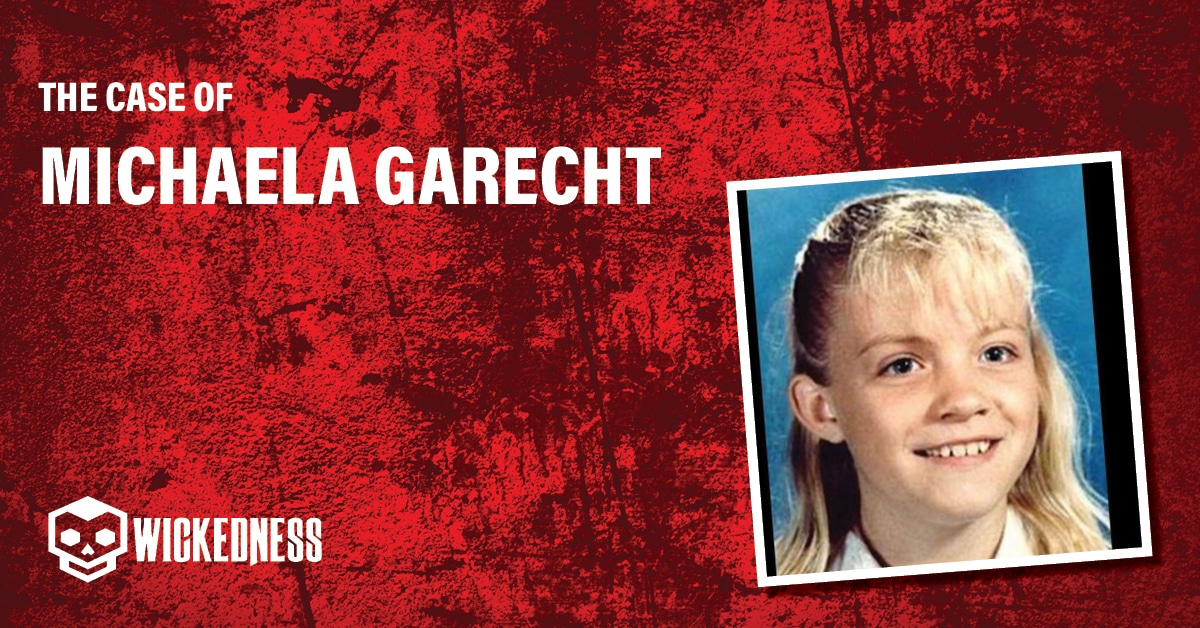 Who was Michaela Garecht?

There is not a lot of information about Michaela and her early years. It is known that Michaela Joy Garecht was born on January 24, 1979 in the bay area, Oackland, California. Daughter to Rod Garecht and Sharon Murch. She was a happy and full of energy little kid.

Michaela’s mother Sharon was always very protective of her, she wanted to be with her child all the time. This may have been because they lived in Hayward, California, the sixth largest city in the bay area and it holds a violent crime rate higher than 88% of all other cities in the USA.

On November Saturday 19, 1968, at 10:00am, Michaela was wearing a t-shirt with the word “Metro” on the front, rolled-up denim jeans, black Mary Jane shoes, and pearl-colored feather-shaped earrings. She was happy and sharing the morning with her best friend Katrina Rodriguez.  The two kids wanted to get some sodas, food and candy from the shop, so they asked Sharon permission to grab their scooters and go to the Rainbow Market, just a couple of blocks away from their house. Sharon allowed it. The two girls left and after getting what they needed in the store, they started walking back home but soon realized they had forgotten their scooters; they ran back to the market just to realize one scooter was missing. Michaela later spotted it farther down in the market’s parking lot. It was parked right next to a car. When she was ready to grab the scooter by the handles and go back to her friend Katrina, an unidentified white male came out of the parked car, grabbed Michaela, picked her up and put her inside the car while Michaela screamed. Little Katrina Rodriguez recalled the scene: “I looked up when I heard a scream, and I saw a man putting her into his car. She was still screaming. I just stood and watched, frozen in shock.¨ She then ran back to the store and asked for help to a female clerk who called the police immediately and reported the kidnapping.

It is known that the first 48 hours after a kidnapping occurs are the most important. It’s crucial time to find the victim. In Michaela’s case the first 48 hours were wasted because when calling 911, the Rainbow Market clerk gave police a wrong description of the abductor. She had told the 911 dispatcher that the suspect was a white male in his thirties, very ¨hippie like¨; she said the suspect had a moustache and he was driving a burgundy colour car in appearance. But it’s only two days after that she realized she had mistaken the abductor with another man she saw in the parking lot earlier that day. The description the clerk had given to the police was erroneously distributed in the media for nearly two days! A lot of time lost.

When questioning the only eye witness of the abduction, Katrina Rodriguez about the suspect’s description, she told them he described him as a white male in his twenties. The most distinguishing characteristic was that he seemed to have severe acne or pockmarks on his face. He had shoulder length, dirty blonde hair. He was around 6 feet 0 inches (1.83 meters) in height and had a slender build. The witness described him as having fox-like, blue eyes and wearing a white T-shirt. Rodriguez also described the abductor’s car and as a large older model, American made sedan either cream or tannish gold in colour. A composite of Michaela’s abductor was created.

When analysing Michaela’s scooter, forensic inspectors found unknown fingerprints and they were believed to belong to Michaela’s abductor but with nothing to compare them to, they were useless.

Michaela Garecht’s kidnapping became a very popular one in the Alameda County and the whole country. Police and the Federal Bureau of investigation searched hillsides, parks, and unpopulated areas in southern Alameda County. They used helicopters and airplanes. In the first year after the abduction police received almost 5000 tips. A 70 thousand dollars reward was offered to anyone who could give an actual lead to Michael’s case. There were posters, milk carton and billboards with Michaela’s information. But this huge amount of effort still led to nothing. Michaela whereabouts or who had taken her remained a mystery.

In December 1982, a false lead was produced by an inmate named Roger Haggard. He told a prison guard he had killed and buried Michaela Hunter’s Point area of San Francisco. He specifically said he had buried her in a gladiolus field in Union City. Police flew Haggard to the claimed area but after 8 hours of searching, he confessed he was lying. This added six and a half years to his current sentence and left police with nothing again.

Another possible suspect the police department had their eyes on was Tim Binder, a man who was also of interest for the cases of Nikkie Campbell, Ilene Misheloff and Amber Swartz. Police paid attention because of his weird behaviour towards kids. Binder had also approached all the families of the kidnapped/dissapeared girls and it was obvious he wanted to be weirdly involved. When taking a look at his personal van, the interior was covered with pictures of kids. But as weird as this man looked and as crazy as this all sounds, police didn’t have any actual evidence against him. The charges were dropped eventually.

In 2009, the reappearance of a kidnapped Jaycee Dugard, after 18 years of disappearance, She was found in Philip Garrido’s house. Garrido’s house was an hour away from were Michaela was taken and he had been freed from prison for rape and kidnapping. Like Garecht, Dugard was also thrown into the back of a car in broad daylight and in the presence of witnesses. The general description of the kidnapper and the car used in both kidnappings are also similar. Garrido went to jail for Jaycee Lee Dugard abduction but nothing was linking him to Michaela’s case.

In August 2012, a second suspect would call the police attention. Wesley Shermantine, one of the Speed Freak Killers, told the police he believed his partner in crime, Loren Herzog, who had recently committed suicide, looked a lot like the suspect who took ¨that Hayward girl¨. Shermantine gave the police a location in Linden, California. It was a well in a rural area were both killers disposed of their victims. Thousands of bone fragments were recovered but none of them matched Michaela’s Garecht. Once more: cold case.

In 2020, 32 years after Michaela Garetch abduction, the police was finally able to use the fingerprints found in Michaela’s scooter and identified a suspect. On Dec. 21, 2020, David Misch was charged with the kidnapping and murder of Michaela Garecht. Misch had been in prison for 30 years after being convicted of the murder of a 36-year-old woman in 1989. He was also awaiting trial for his connection to the abduction and murder of two other young women in 1986.

After Misch’s arrest, Garecht’s mother released a statement on her blog: “So thank you, all of you, for your love, a love that has endured decades, for Michaela. I ask that you please don’t forget her now. She is no longer a case, but she is what she always has been, and that is a bright and shining light, and in her absence from this earth, it is up to us to find a way to carry her light forward.”

David Emery Misch was born in 1961. According to people who knew him back in 1988, the year Michaela Garecht was abducted, say Misch was tall, thin, and blonde with blue eyes, just like Rodriguez’s description at the time. He drove the same kind of car, damaged, cream or tan. And eyewitness testimony placed him in the immediate area on the day of Garecht’s abduction. With advancements in software and technology, an investigator re-examined the print found on the scooter in 1988 and linked it to Misch.

Though David Misch is now awaiting trial for 9-year-old Michaela Garecht’s kidnapping and murder, he has not complied with a request for a DNA swab, as reported by The New York Times, nor has he pointed investigators toward Garecht’s body.

How many people have David Mish killed?

David Misch has killed three women in the 80’s and is still awaiting trial for the kidnapping and possible murder of Michaela Garecht.