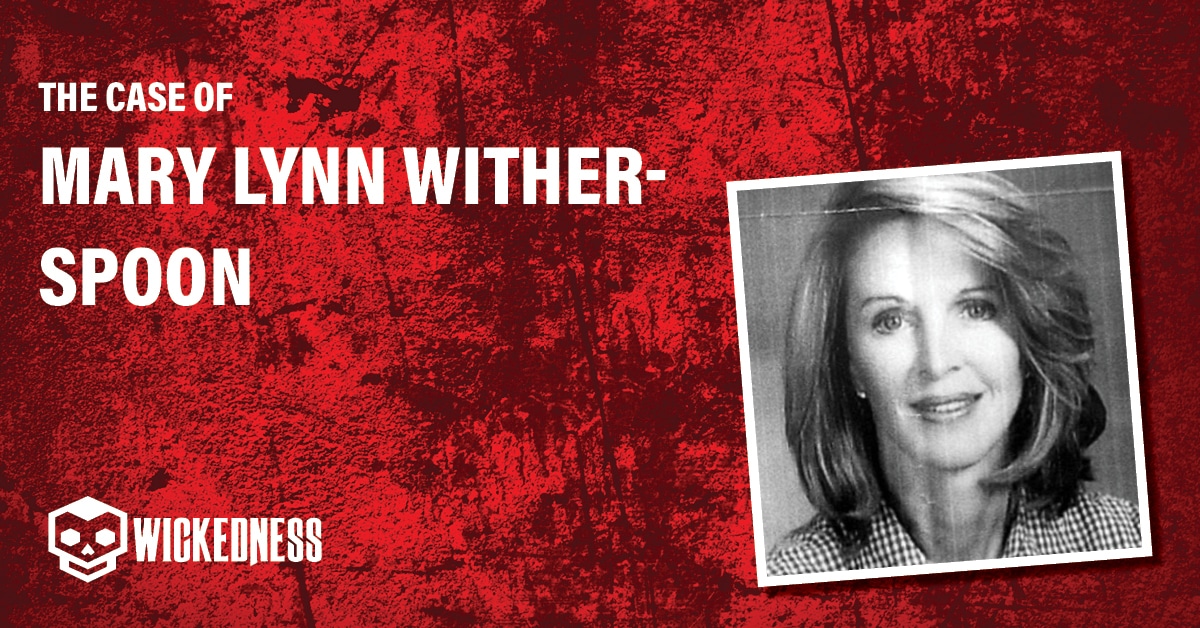 Mary Lynn Witherspoon Case: Raped And Killed After Being Stalked For 23 Years

53-Year-Old Mary Lynn Witherspoon, a beloved French teacher, was a kind, lovely woman living an idyllic life until her long-time stalker decided to turn it into a tragic story.

Mary Lynn Witherspoon was born on August 14 1950 and had three older sisters, being particularly close to one of them, Jackie Olsen. She graduated as a high school valedictorian, became a French teacher, married a doctor, and gave birth to her daughter Jane.

Mary Lynn Witherspoon worked as a French teacher at Charlestowne Academy. Her marriage didn’t last and she got divorced. Since she was a charming and attractive young woman, many suitors were approaching her.

In 1981, Mary Lynn Witherspoon met Edmonds Tennent Brown III and started dating him. Edmonds had 2 children from his previous marriage, and he was their sole carer after their mother left them one day. She and Edmonds dated for the next 8 years, during which he proposed several times, but the answer was always negative. In 1988, they broke up, and this break up affected Edmonds’ son, Edmonds Tennent Brown IV, especially hard.

How An Unhealthy Obsession Grew And Affected So Many Lives

After the breakup, Edmonds Tennent Brown IV lingered around Mary Lynn’s house for many years to come, and even after this school teacher moved away with her daughter, he would always find them. In 1991, he disappeared from their lives, and it wasn’t until 2001 that Mary Lynn saw this odd boy again. But he was no longer a boy, he was a 30-year-old man.

Over the next 3 years, he stalked her and appeared at her house on numerous occasions. Several times, he stole Mary Lynn’s underwear while she wasn’t home. She and her friends and family were concerned. They called her ex-boyfriend and Edmonds Tennent Brown IV’s father, Edmonds Brown III, but he was no longer able to control his son.

Until then, she never filed an official police report, although she did ask several of her acquaintances that worked as local police officers to keep an eye on her house in case something happens. One day in 2013, the straw that broke the camel’s back finally happened. She caught him stealing her underwear again, but this time, he made no effort to escape. Instead, he boldly stared at her until he left.

Finally, she reported him to the police. He was charged with burglary, and he was awaiting his sentence. His background check showed that he had numerous troubles with the law in the last few years during which he served jail sentences for burglary and similar crimes. She knew that he will get out eventually and that he will disturb her over and over again.

She applied for a state program that would protect her, called The Victim Notification System, or “Vine.” With this program, she was promised to be phoned and sent a letter if Tennant was released. Several months went by, and she started living a peaceful life again. In the fall, she resumed teaching, and everything seemed normal, up until one day.

The Day When Mary Lynn Witherspoon Was Found Dead

On November 14, 2003, Mary Lynn didn’t appear at her workplace, which was unusual for her. Her colleague and best friend called her daughter Jane. Jane knew that something terrible has happened. The school principal and one of the staff members went to Mary Lynn’s home on Tradd Street and knocked on the doors. There was no sign of burglary.

The police were called and they entered the house. The house was in an unexpected state of mess, considering how well-kept it usually was. The breakfast wasn’t finished, there were her personal belongings and clothes scattered all over the floor.

A Disturbing State of Mary Lynn When She Was Found

Finally, she was found in her second-floor bathroom. Unfortunately, it was too late, as she was already dead. Her feet and hands were tied with tape. Her naked body was lying in the water. It appeared that she was raped and strangled. There was a knife nearby. Everyone immediately knew who was the only person who could’ve done something like that – Edmonds Tennent Brown IV. But he was still in Charleston County Jail, right?

He loved Mary Lynn Witherspoon because she was nice to him. She communicated with him and tried to be kind. Still, as a teacher, she could feel something wasn’t right about this boy. That was probably a reason why she never wanted to marry his father, she feared it wouldn’t be a healthy situation for her and her daughter Jane.

After she broke up with his father, this has sent him into a downward spiral. For the next 3 years, he randomly appeared at her home, in her backyard, and he even found her when she moved with her daughter. On one occasion, he even broke into her home and stole make-up and some clothes that belonged to her.

In 1991, he disappeared from Charlestown. He spent a few years in the Coast Guard, then drifted from one menial job to another. During that time, he had a few run-ins with the law, for crimes like car theft and breaking and entering. He was diagnosed with several disorders, some of them including bipolar disorder and gender dysphoria. In 2001, he returned to Charlestown and to his old object of obsession – Mary Lynn Witherspoon.

When Mary Lynn Witherspoon’s dead body was found, Edmond Tennent Brown IV was the main and only suspect. However, everyone thought he was still in jail because Mary Lynn was a part of the “VINE” program that was supposed to notify her once he was out the jail.

Jane Whelchel, Mary’s daughter, checked if Tennent was still in jail. To her shock, he was already released from jail. She found out that an automatic call was made several times to reach Mary Lynn Witherspoon, but without success. And even if Mary Lynn answered the phone, she would receive the wrong information anyway, because the system was trying to send her the wrong message, that Edmunds Tennent Brown IV had been transferred to the South Carolina Department of Corrections. The letter that was also supposed to be sent reached her house the day after she was murdered.

The police started looking for Tennent. They intentionally left the crime scene and Mary’s house abandoned. This proved to be a perfect lure for Tennent, who only 20 minutes later came walking down the street. He was arrested on the spot.

Disturbing Evidence That Shed a New Light Onto The Crime

When they searched Tennent, the police found more evidence of his crime. He had in his possession the keys to her house. They also found a newly acquired driver’s license, that Tennent got using her address. The most bizarre evidence, however, was the fact that Tennent was wearing her underwear at the moment of his arrest.

In his car, the police found more disturbing evidence. He had a plan of starting a new life as a woman. A FedEx package arrives at the victim’s house while the investigation is still underway. Tennent ordered it after he murdered Mary Lynn Witherspoon. The package contained a wig similar to the victim’s hair, fake foam breasts, make-up for men, a drag queen video, and several other times aimed at making Tennent look like a woman, or more precisely, like Mary Lynn.

Tennent Brown pleaded guilty. He was sentenced to life without parole. He could’ve been sentenced to the death penalty, but Mary Lynn’s family chose to not go through a trial.

Verdict and Life In Prison

Later, Tennent complained and asked for a new trial, claiming that he received inadequate representation by the public defender assigned to his case. Despite his complaints, Edmonds Tennent Brown IV remains in jail serving a life sentence.

In 2016, Edmonds Tennent Brown IV talked about wanting to become a woman. As a transgender inmate started going under the name of  Katheryn Brown. Katheryn wanted the Department of Corrections in South Carolina to pay for the surgery. She claimed her gender identity issues were a more cruel prison than the actual incarceration. So far, her request for receiving funds for gender reassignment surgery remains rejected.

After the “VINE” system failed Mary Lynn Witherspoon in notifying her that Tennent was released, her family urged South Carolina congressman Merrill Smith to improve the notification procedures increase victims’ rights, and provide stricter penalties for stalkers. The bill was signed by Governor Mark Sanford after 4 months and it was named Mary Lynn’s law.

How Did Mary Lynn Witherspoon Die?

Mary Lynn Witherspoon was raped and strangled by Edmonds Tennent Brown IV, after being stalked for 23 years.