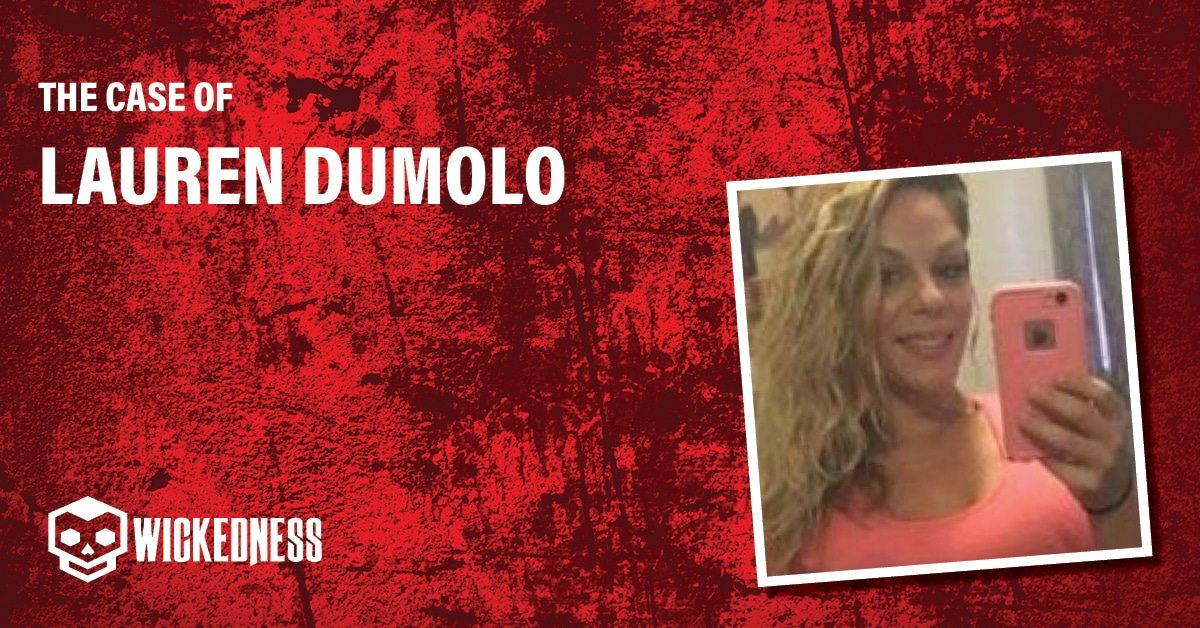 Lauren Brittney Dumolo was born on July 14 1990 and she was raised in New York by her father, Paul Dumolo. Lauren had a younger sister who she lived with growing up and her name was Cassie. There’s only 13 months between them. For some reason, many of the media reports on Lauren’s disappearance refer to her mom as “Ann” even though her real name is Laura Decker. She will be referred to as Ann throughout this article.

Paul and Ann divorced when the girls were small and there was a bitter custody battle over their daughters. Paul Dumolo was awarded custody of the girls and this is why they grew up being raised by him. Neither Lauren or Cassie had a relationship with their mother growing up. Paul said that Ann didn’t attempt to make contact with the girls at all while they were growing up but he knew that she was living in Florida. When Lauren and Cassie were around 18 and 17, they asked to contact their mom and Paul agreed.

When Lauren was in her teens, she was in a car accident. Not only did this stop her ever wanting to learn how to drive, it also began her lifelong battle with substance addiction. Following the accident, she was prescribed Percocet to help her manage her pain.

At the time of her disappearance, Lauren had a five-year-old daughter. Unfortunately, due to her substance habit, Lauren lost custody of her daughter when she was three, and she now lives with her paternal grandmother.

As adults, Lauren and Cassie were convinced to move to Florida to rebuild the relationship with their estranged mother. They also had family who lived down there who they were keen to get to know. They eventually settled in Cape Coral which is where Ann lives with her boyfriend, Victor.

Lauren was really keen on bettering herself and getting clean again. She was working two jobs, one at a Taco Bell and another as a server at a restaurant. Lauren was also into meditating at a nearby park and keeping positive at all times. This was a huge part of her life, so much so that she has the word “Namaste” tattooed down the side of her body.

On June 1 2020, Lauren was admitted to a mental health facility. Her family has said that she was struggling, and she sought out help. She was released on June 18 2020 and she is seen on surveillance video applying for jobs, as she lost her server job while she was in the facility.

Even though it was clear that she was having some mental health issues in the weeks before her disappearance, her family is certain she didn’t disappear willingly. Lauren was determined to get custody of her daughter again and this is evident from the surveillance footage of her applying for jobs at a gas station and sandwich shop after she was released from the psychiatric facility.

At the time of her disappearance, Lauren was living with her long time boyfriend, Gabriel Pena. They had been dating for a couple of years and Gabriel, who was also known as Gabby, was good friends and work colleagues with Lauren’s mom’s boyfriend Victor. There are some sources that say Lauren had had an abortion in late May 2020 and this was the beginning of her mental health problems but this isn’t concrete.

The Mysterious Disappearance of Lauren Dumolo

Lauren’s sister Cassie says that she spoke to Lauren on the night of the 18th. Lauren was worried that she wouldn’t find another job because of the Covid-19 pandemic and Cassie put her mind at ease. The phone call ended with Cassie asking Lauren to call her back the next day so Cassie could help her file for unemployment if it was needed.

That was the last time Cassie spoke to her sister.

At 6am on June 19 2020, Gabby says that he woke up for work but Lauren was still sleeping so he kissed her and left. The next known sighting of Lauren is from a maintenance worker who claims he saw her at around 8.15am. He said that she was heading in the direction of Four Freedoms Park. This worker claims that they had a brief conversation where Lauren asked him if he knew of any cheaper apartments in the area because she wanted to get out of the situation she was in. He didn’t and that’s where the conversation ended. Lauren’s family are confused by this because she was very close with her family, in particular her sister. None of them knew that she was looking for a new apartment and she’d just paid her month’s rent so it didn’t make sense that she’d be looking for somewhere new.

At roughly 10am, Lauren called Gabby through Facebook. This wasn’t answered and Gabby claims he didn’t see the call come through. He didn’t hear from her again all day and when he returned home at 10pm that night, Lauren wasn’t there.

Gabby called Paul Dumolo at 11pm, saying he didn’t know where Lauren was. Paul found this strange. Despite the couple dating for a few years, Paul had never met Gabby and he lived in California. He wondered why Gabby hadn’t called Lauren’s mom who lived a couple of blocks away. Paul couldn’t help much so he told Gabby to keep in touch if he heard anything and to file a missing person’s report with police.

The following day was Saturday and Cassie asked Gabby to call her when he got in from work to see if Lauren was there or if there was any sign she had been there. He told her that he wasn’t going home, he’d be staying at a friend’s house that night. This set alarm bells ringing with Cassie and Paul, Gabby didn’t seem to be showing any concern for his missing girlfriend.

June 21 was Fathers Day and when Paul hadn’t heard anything from Lauren or Gabby, he was beginning to become very worried. It wasn’t like Lauren to miss Fathers Day, he was very close with his oldest daughter. Paul contacted Cape Coral Police Department himself and learned that no prior calls about Lauren had been made. He filed a missing person report then and there before booking a flight down to Florida to look for Lauren.

Later that day, at 6.24pm. Gabby finally reports Lauren missing to Cape Coral Police Department but because of a clerical error, her case wasn’t assigned to a detective until June 24.

Lauren Dumolo’s black purse was found in the Four Freedoms Park that same weekend. This was a park that Lauren enjoyed meditating in daily, and it was close to her house. Her purse contained her wallet with her bank card and ID in. It was turned in to park rangers but because Lauren wasn’t considered missing, her family wasn’t informed of the discovery for a few days.

The Search for Lauren Dumolo

Lauren Dumolo’s family didn’t wait for the police to start investigating. As soon as her dad arrived in Cape Coral, her family started putting together search teams. They were going door to door in the area, speaking to locals and putting up flyers.

Detective Nick Jones was finally assigned to her case and an appeal was put out. This led to hundreds of leads but they didn’t give them anything new. Her cell phone had no suspicious texts or calls on and her search history was related to her recent job search.

Nothing new came up until July 2. Lauren’s family had been searching the local area every day, including Four Freedoms Park, where her purse was found. On July 2, a red lace tank top that Lauren was believed to be wearing on the day of her disappearance was found on the beach in the park. Her family thinks this was placed there a day or two before it was found, they had searched that park many times, and there’s no way they would have missed it.

Cadaver dogs were released in the park to see if they could pick up any scent of Lauren’s and they went straight to a work van that Gabriel used frequently for work. It was parked on Lauren’s mother’s driveway. Gabriel Pena does have a history of misdemeanor domestic violence against his ex-wife. However, Cape Coral Police have cleared him as a suspect.

At the time of writing this, in July 2022 after an extensive search effort, Lauren Dumolo is still missing. Her family have no idea what has happened to her and even though they have their suspicions, the police don’t have anything solid.

Yes, the case of Lauren Dumolo is still unsolved. She is considered an endangered missing person. Lauren has light brown hair, brown eyes and is 5 feet tall. She has four tattoos; “Namaste” down her side, a NY symbol on her pelvis, a symbol on her wrist and rosary beads on her ankle.

When did Lauren Dumolo disappear?