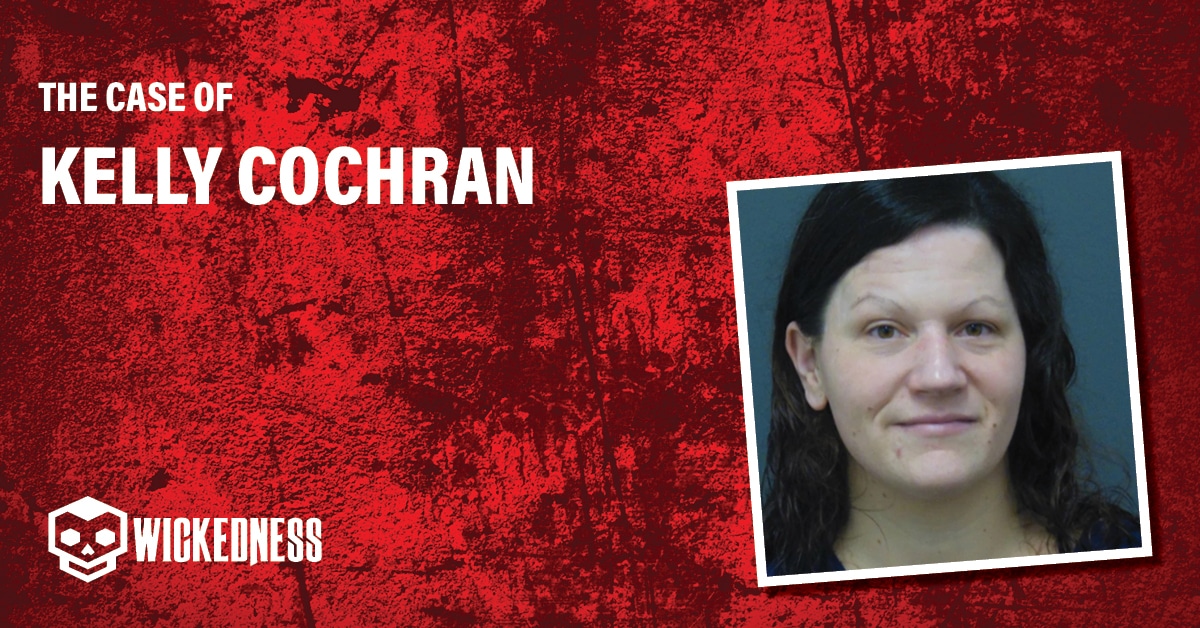 Kelly Marie Cochran was born on June 5, 1982, and grew up in Merriville, Indiana. Kelly and her next-door neighbor Jason Cochran slowly fell in love. In 2002 upon graduating high school, the pair got married. On the night of their wedding, Kelly and Jason made a pack. If one of them were ever unfaithful, they would kill their lover.

Jason Cochran worked servicing swimming pools until his back gave out after ten years of physical labor. Kelly tried hard to pay the bills, but the couple’s debt kept piling up. In 2013 Jason and Kelly moved to Michigan, hoping that legal marijuana would help ease the chronic pain Jason suffered.

When Kelly’s husband Jason discovered the extramarital affair, he remembered the pact they had made on the night of their wedding 13 years earlier. If they were ever unfaithful to each other, they were required to kill their lover. Jason expected Kelly to follow through.

On October 14, 2014, as part of a murder plot, 33-year-old Kelly lured Chris to her house with the promise of dinner and sex. When Chris arrived, Kelly’s husband Jason shot him in the head. Neighbors reported hearing a gunshot followed up by the sound of power tools. After the murder, Kelly, and Jason cut up Chris’ body in the basement of their home and scattered his remains in several local woods.

The last time anyone had heard from Chris was on the 14th when he texted his ex-girlfriend. Chris and his ex-girlfriend had broken up sometime before, but they were still good friends and planned to spend Thanksgiving together. When his ex-partner hadn’t heard from him in two weeks, she went to his apartment to ensure everything was okay. Upon arriving at his apartment, she noticed that his dishes had been sitting there a while and that his medication hadn’t been taken. She immediately reported him missing but unfortunately, Chris remained unfound until two years later.

On May 16, 2016, a skull was recovered in the Upper Peninsula woods outside Crystal Falls, Michigan. A murder weapon was also discovered. However, no DNA evidence was found on the gun. The skull found with a bullet hole was identified as Chris Regan’s through dental records. No other body parts were ever recovered.

During the investigation, Chris’ car was found abandoned with a sticky note with directions to Kelly and Jason Cochran’s address inside it.

Investigators knew that Kelly was having an affair with Chris, but with no solid evidence, no charges were made, and the case went cold. That was until Kelly Cochran’s husband, Jason Cochran, died of a heroin overdose on February 20,  2016.

On February 20, 2016, 911 operators received a call from a frantic Kelly Cochran. She called to report that she had just found her husband in their home unresponsive. An autopsy revealed that Jason had been injected with a lethal dose of heroin before being smothered. His cause of death was asphyxiation, and his death was ruled a homicide.

Kelly Cochrane was arrested for the murder of Jason Cochrane. Immediately after being arrested, she confessed that she and her husband had made a pact on the night of their wedding that they would kill the third person if they ever cheated. That is what they did to Chris. She told investigators how they had lured Chris over into their home and how Jason had shot him in the head before they dismembered him and scattered his remains in local woods. Kelly informed investigators that she liked Chris and began to resent Jason for what he had made them do to her lover Chris. As a result, she got her payback. She killed him.

In May 2017, Kelly Cochran was found guilty of five counts related to the murder of Christopher Regan, including concealing a person’s death, lying to a peace officer, and conspiracy to mutilate a dead corpse. In April 2018, Kelly took a plea deal and pleaded guilty to the first-degree murder of her husband, Jason Cochran. She was sentenced to life without the possibility of parole. Part of her plea agreement states that she will not be charged with other crimes in Lake County. Currently, at the age of 40, she is incarcerated at the Women’s Huron Valley Correctional Facility in Pittsfield Charter Township, Michigan.

Although only convicted for the two murders, other reports, including those made by her friends and family, suggest she is a serial killer with at least nine additional murders. However, no criminal charges have ever been filed against her.

Where is Kelly Cochran now?

Shortly after her arrest, Kelly revealed the entire truth about the murder of Chris Regan and Jason Cochran. She said the murder of her husband Jason was revenge and that she evened the score. In May 2017, Kelly Cochran was found guilty of five counts related to the homicide of Chris Regan, and around April 2018, she pleaded guilty to the murder of Jason Cochran. Part of her plea agreement states that she will not be charged with other crimes in Lake County. Currently, at the age of 40, she is serving a life sentence at the Women’s Huron Valley Correctional Facility in Pittsfield Charter Township, Michigan.

What happened to Jason Cochran?

Jason Cochran’s death was initially ruled an overdose of heroin, but an autopsy revealed that he was injected with a lethal dose and then smothered. His cause of death was asphyxiation. He was murdered.

What sentence did Kelly Cochran receive?