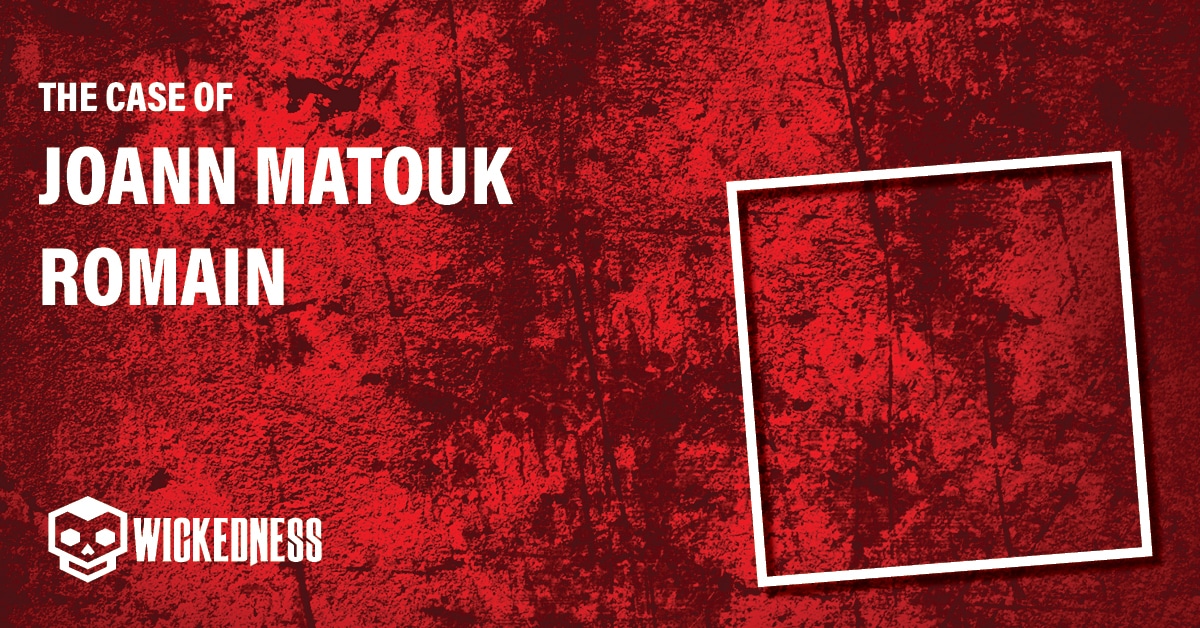 Who was JoAnn Matouk Romain?

JoAnn Matouk Romain was born and raised in Grosse Pointe Woods. In 1980, she married her husband, David Romain. Together, they had three children: Kellie, Michelle, and Michael. In 2010, JoAnn Matouk Romain was 55-year-old and living in Grosse Pointe Woods, Michigan. She shared a home with her three adult children and was divorced from her husband. She was described by her daughter, Michelle, as being full of life, the best mom with the warmest heart.

The disappearance of JoAnn Matouk Romain

In January of 2010, JoAnn Romain attended a 7 pm prayer service at St. Paul at the Lake Catholic Church. The events after the evening service are confusing and often conflicting.

A witness reportedly remembers hearing a car alarm going off after JoAnn left the Church service. They saw the lights flashing and heard the alarm for roughly 15 seconds. Another witness who left the service around 7:25 pm recalled seeing a black van parked in the driveway, but its relevance (or lack thereof) has never been proven or disproven. However, the witness did not recall seeing JoAnn’s car.

Another witness left the church between 7:25 and 7:35 pm and recalled being the last one in the parking lot (and feeling uneasy because it was so dark and she was alone.)

The last witness was a woman named Michelle Alt, who was leaving the Grosse Pointe Academy (located next to the church) at about 7:50 pm. She saw a strange, light-colored vehicle, possibly a Mercedes, parked near the church. Later, she would claim that she saw a man running nearby with a scarf but no coat despite the cold weather.

All of these accounts suggest that JoAnn’s car left the church and then returned sometime after.

Police Show up at the Romain Home

At around 9 p.m, Police showed up to the home that JoAnn shared with her children and told them that their mother was missing. The police said that, during a routine patrol, they found JoAnn Matouk Romain’s silver Lexus parked near the church parking lot, close to Lake St. Clair. They found her purse in the seat.

They grew further concerned when they sound footprints, handprints and buttprints leading down to the frigid St. Claire water. Police believed that JoAnn had purposefully gone into the river in an act of suicide, and they launched a massive search and rescue. The icy lake was partially frozen, shallow, and had no current. JoAnn would have had to walk the length of two football fields to reach a point that was over her head.

Despite police efforts, JoAnn  Matouk Romain was nowhere to be found that night, or for many weeks after. It would take seventy days before a body was found.

On Saturday, March 20, 2010, two fishermen on Boblo Island, in Amherstburg, Ontario, found her body. It was thirty-five miles away from where JoAnn was believed to have gone in the water. Due to the advanced state of decompositions, dental records were required to positively identify JoAnn. It was impossible to say how long JoAnn had been in the water. However, Dr. Jeffrey Jentzen, professor of forensic pathology at the University of Michigan, believes that her body may have been there for quite some time because algae and zebra mussels were attached to her legs.

There seemed to be a lack of any significant injuries however that would be consistent with foul play or murder.

However, her autopsy showed that JoAnn Romain had died from “dry drowning” meaning that there was no water in her lungs, and therefore her breathing was compromised before she entered the water.

The only injury present was two small bruises on her upper left arm. Michelle believed that this indicated that JoAnn was grabbed because she always held her purse tight on her left side, and the purse had a large tear in it. The purse, Michelle said, was less than 2 months old. Law Enforcement, however, disagreed because the tear was near a pocket (instead of the strap or buckle) and had never done a DNA test on the purse.

JoAnn’s family, particularly Michelle, hired multiple private investigators over time. Though few found any more evidence to go on, none believed that JoAnn’s body went in by the shallow church water and somehow ended up 35 miles away. To Michelle, at least, this meant that JoAnn’s body must have been dumped somewhere closer to where it was found, and the car left where it was in an attempt to make it appear as if JoAnn had committed suicide.

When her body was found, Michelle was quick to notice the pristine condition of her heeled shoes. She believed it would have been impossible for her mother to get down the steep bank and walk across the rocky-bottom water to a place deep enough to drown without a single scuff mark on her shoes.

All of these facts have led Michelle and others to believe that JoAnn’s death was a murder, not a suicide as suggested by police. Another indication of this was how JoAnn acted in the last few weeks of her life; according to Michelle and others around her, JoAnn was afraid for her life.

JoAnn Matouk Romain was Scared for her Life

In the weeks leading up to her death, JoAnn acted “paranoid.” Two employees from two different law firms, Nancy Barich and Jeanne Wyatt, both said that JoAnn seemed afraid of her ex-husband who they said was “controlling.” Jeanne Wyatt claimed that JoAnn “feared trouble from her husband.”

Michelle claimed that JoAnn was also afraid of her cousin, Tim Matouk, who was a Harper Woods police officer at the time. She claimed that she overheard a phone call between the two just weeks before her death, wherein JoAnn yelled at Tim to “never call me again.” Michelle then says JoAnn looked at her and said, “If something happens to me, look to Tim.”

One of the private investigators that Michelle hired, retired FBI agent Bill Randall, was able to get a copy of JoAnn Matouk Romain’s cell phone records. They found that one phone number belonged to a security company and that JoAnn had left a voicemail for the company. She was apparently attempting to contact an investigator because she believed that she was being followed by someone unknown to her. She believed they were trying to figure out her routine, were tapping her phone, reading her mail, and following her.

Both Michelle and John Matouk, JoAnn’s brother, said that JoAnn  Matouk Romain was nervous, cautious, and very scared in the weeks leading up to her death.

Law Enforcement would later say that they believed JoAnn was suffering from a paranoid psychosis, and this could have directly factored into her apparent decision to take her own life.

Michelle has named three possible suspects: JoAnn Matouk Romain’s husband, David Romain; JoAnn’s brother, John Matouk; and JoAnn Romain’s cousin, Tim Matouk. However, all three have always denied involvement and none have been official suspects by police, who maintain that JoAnn’s death was a suicide.

Q: Who is Tim Matouk?

A: JoAnn Romain’s cause of death has been listed as “drowning.” The circumstances surrounding her death remain a mystery.