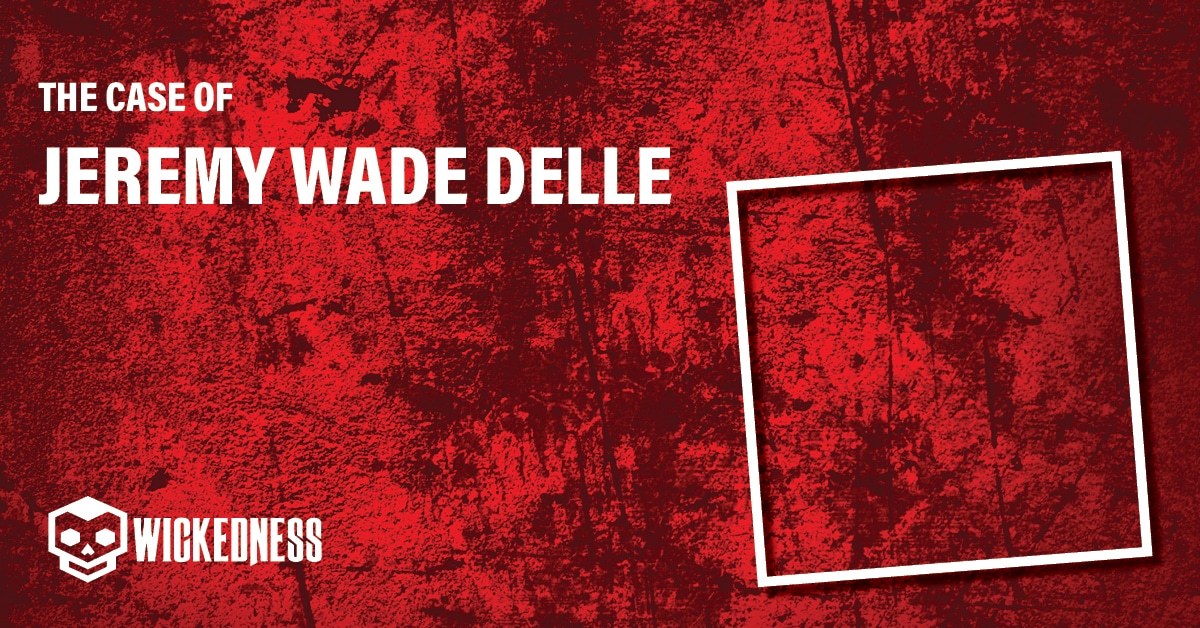 Who was Jeremy Wade Delle?

Jeremy Wade Delle was born on February 10, 1975 in Kentucky, USA. Son to Joseph Delle and Wanda Crane who were married for 9 years but ended up splitting up in April 1979, when Jeremy was 4 years old.

Jeremy would grow up to be a depressed quiet sad eyes kid; probably fuelled by his parents’ divorce. He was still a very talented kid, he loved drawing and painting, it was his way of escaping sadness. Jeremy was a good son, a good brother, a good friend. But depression would escalate and have Jeremy drowned to drugs, erratic behavior, and lack of attendance at school which eventually had him lower his academic level. Jeremy was so frustrated with his reality, he also started lying compulsively about his life. Let’s go through Jeremy’s timeline from 1984 to the day he decided to take the last decision of his life.

In August 1984, Jeremy entered Lakewood Elementary school in Dallas, while living with his mother, her new husband and his sister, who was older than him for 4 years. Jeremy lived with his mother until 1989. He would later move back with his dad on March 1990, he transferred schools and began attending Richardson High school. That same month Jeremy would meet a girl named Nancy while attending a church retreat. They liked each other and started dating. Nancy thought Jeremy was a handsome smart teenager with a great personality but with a lot of anger problems towards his parents. They continued dating for a bit over a month but Nancy decided to end things with Jeremy in April. She thought Jeremy was way too possessive of her and she didn’t like his drugs habit. Here is when things would take a dark turn in Jeremy’s life.

Two days after Nancy broke up with Jeremy, he was hospitalized after trying to commit suicide by taking a large amount of pills. Jeremy then is admitted to Tumberlawn Psychiatric Hospital, where he was supposed to get help but was released on July.

Jeremy then would be sent again to a church retreat where he climbed up a cliff and threatened to jump off. He didn’t do it in the end, Church authorities tried to give him counselling.

Jeremy returns to Timberlawn where he met Michelle, a girl who was also a patient in the same hospital. Jeremy and Michelle started dating. Eventually, they would get passes every few days to visit family and this motivated Jeremy to drive to Nancy’s house and threaten to shoot himself because he couldn’t cope with family and school problems. Later in October, Jeremy is released from Timberlawn and Michelle is re-admitted so they break up.

Jeremy began attending Richardson Junior High school again on October 16, 1990. Life in High school for Jeremy wouldn’t be easy at all. He was having a hard time adapting and dealing with his classmates bullying every day. Somebody heard him making a comment about his algebra teacher, which got his locker searched three times before Christmas break. When looking inside his lookers, school authorities found several bottles of White out and a ¨Cults that kill¨ book. Back in that time, White out was used for snuffing or drinking, its effects resembled the alcohol ones but without being drunk.

In November 1990, Jeremy would start concerning many of his classmates by admitting his fascination with suicide. He sounded so serious; he ended up being reported to the school counsellor.

A month later, on December 11, 1990, Jeremy tells a school friend that he doesn’t need any more help from the school and that he’s going to kill his math teacher, Mrs, Neals. He also talked about his suicide intentions. That same day Jeremy allegedly stole 47 dollars from a school cashbox after a basketball game. Next day, Jeremy gets his locker searched again and a deer’s leg is found inside, together with the ¨Cult that kills¨ book. Richardson High school assistant principal calls the police and tells them about the 47 dollars theft, the threats against the math teacher, and the odd things found in Jeremy’s locker. Police actually arrested Jeremy for theft, when interviewing him they also took the chance of asking him about the threats. Jeremy just answered that his comments had been twisted and taken too seriously. His father picked him up from the station and told the police Jeremy had been doing therapy and he will seek more counseling.

Jeremy is forced to attend the School Suspension Program for his erratic behaviour at school. There he met Lisa. They started a special dynamic where their way to communicate was through notes. They would pass each other notes everyday talking about life, their personal problems and how they felt about everything. Jeremy would always finish his notes with ¨write back¨. But according to Lisa, the first days of January, his last phrase was ¨Later days¨. Which she thought was unusual was didn’t make a big thing of it.

On January 7, 1991, Jeremy leaves school to his counselling appointment and after that goes to his father’s girlfriend´s house. She wasn’t home so Jeremy took the afternoon to eat something and watch TV. Around 6:30, after paging his father Joseph that he was waiting for him at his girlfriend’s place; Jeremy called Nancy and they talk for about an hour on the phone. Before hanging up, Jeremy tells her that was the last time they would ever talk on the phone because he was leaving to Tokyo, Japan next day with his dad. He promised her he would send her a letter and an 800 dollars ring next day, so she could remember him while he was away.

15-Year-old Jeremy Delle made some other calls that night, including a call to his mother Wanda Crane, but there are not details about what they discussed. It’s only known they had agreed on Wanda picking him up from school next day.

On January 8, 1991, Jeremy’s father Joseph leaves for work at 5:30am and a couple of hours later he calls Jeremy home to make sure he’s on his way to school.

Jeremy gets ready for school but decides to give Nancy a last phone call in which he assured he’s leaving to Japan at 3:pm that afternoon. They talk for about 20 minutes. Nancy says good bye wishing him nothing but good things in life.

At 8:20 am, A happy looking Jeremy pages his dad to let him know he’s arrived in school. He then goes to the cafeteria where he met some friends and asked them to mail the ring and letter to Nancy, since he ¨wouldn’t be around anymore after school¨. People who saw him that morning thought Jeremy haven’t looked as happy and full of joy as that morning. He even gave a hug to a couple of girl classmates and even a teacher.

Around 9:35am, Jeremy tries to get in English Class II but his teacher, Ms. Barnet asked him for a pass signed by the school’s principal that showed he was allowed to attend that class with other 30 students. Jeremy told her he was going to bring the admittance slip in a few minutes from the Principal’s office but instead he gets something out of his locker, presumably the gun.

A few minutes later, around 9:45am, Jeremy returns to the classroom and tells Ms. Barnet ¨I’ve got what I was looking for¨, immediately and without giving anybody time to react, Jeremy pulls a 37 calibre Magnum gun, put it inside his mouth and pulled the trigger. Killing himself instantly.

Jeremy Delle left a suicide note to Nancy, this is what it said:

¨Sorry, Nancy, by the time you get this letter I will have blown my head off, aka suicide, better known as (last way out). News flash – not your fault. It’s Michelle’s along with about 137.5 other problems. I was just writing to see if you wanted to go to the funeral. Call my house and ask for my Dad, 690-5338. At least you didn’t have to hear the boom. Love, Jeremy Wade Delle¨

Eddie Vedder Wrote a Song About it – Pearl Jam’s Jeremy

On January 9, 1991, the day after Jeremy Delle committed suicide, Eddie Vedder found an article with tittle ¨Richardson teen kills self in class¨ on the Dallas Morning News. This made him deeply sad and impressed. But also took him back to when Eddie was in 7th grade. There was a kid in his class with similar tendencies, people bullied him too. Vedder himself had gotten in a fight with him at some point. This kid one day freaked out, took a gun to school and shot a fish tank in front of everybody.

Between the memories and Jeremy Wade Delle’s story, Eddie Vedder found good inspiration to write a song that would only take him a few hours to complete. The song’s tittle was ¨Jeremy¨and It became a huge hit for the band. The chorus line is ¨Jeremy spoke in class today¨.  The song was the third single from Pearl Jam’s debut album ¨Ten¨. The album sold over 10 million copies in America, which is known as Diamond status.

The official music video would be released in 1993, Directed by Mark Pellington and starring 12-year-old Trevor Wilson. It would be rated as a controversial music video because not only it talked about Jeremy Wade’s story but it’s last scene was Pearl Jam’s ¨Jeremy¨ would win four MTV Video Music Awards.

How Can You Know if Somebody is in Danger of Committing Suicide?

According to Depression experts from Cummings & Cummings, there are three stages of Suicide.

Stage 1 is the “ideation” stage, during which a depressed person finds him/herself thinking about suicide more and more. However, the fear of suicide still outweighs its attraction. Therefore, the person may be thinking dark thoughts, obsessing over dark music, or expressing thoughts of death, suicide, pain, and hopelessness through artistic expression, but has not yet begun to formulate a specific plan.

Stage 2 is the “planning” stage, during which the person’s dark thoughts begin to turn to formulating a specific plan for suicide. They begin to withdraw from touching others or from being touched by others, or they may stop verbalizing their pain and suffering while seeming to be in more pain than ever.

Stage 3 begins when the suicidal person makes the decision to suicide. The moment the decision is made, it goes “unconscious” and the person goes on what we call “auto-pilot.” People in Stage 3 are imminently lethal; however, they seem more “normal” than they have seemed in a long time.   At this point, the depression seems to suddenly lift because the person has made the decision to die and is no longer wrestling with the decision. People on “auto-pilot” typically attempt suicide within the next 48 hours.

What is the suicide help line?

Jeremy Delle was 5-foot-8, 128-pound Jeremy. He had green eyes, straight brown hair and three tattoos: a cross on his upper left chest, a “13” on the back of his left hand, and an unspecified one on his left arm.

What was Jeremy Wade wearing the day he committed suicide?

On his last day, Jeremy Delle was wearing a gray sweatshirt, gray T-shirt, jeans, leather belt, white thermal underwear, two pairs of white socks and brown leather work boots. He had a gold left earring, gold necklace, silver watch on his left wrist, black comb in pocket and brown holster in waistband. There were powder burns on his left hand.