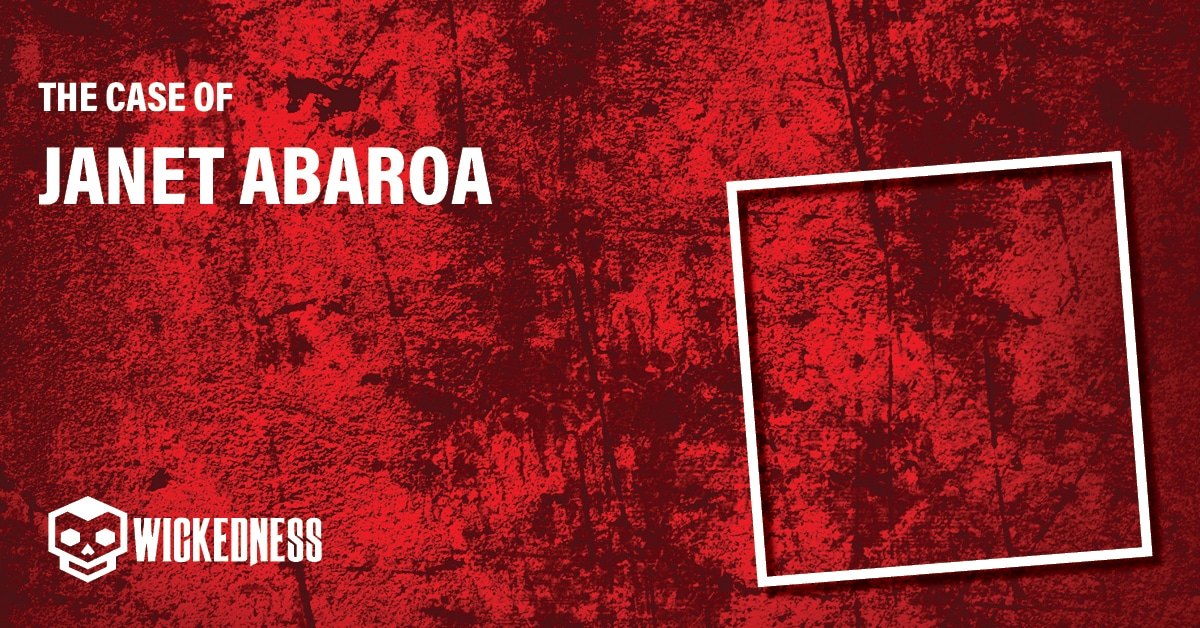 Who Was Janet Abaroa?

Janet Abaroa was born on June 19, 1979. She was part of a big Mormon family, the seventh of 10 siblings. Being a very attractive smart beautiful woman, Janet met Raven Abaroa, also a Mormon, in 1998 at Southern Virginia University, where they both played soccer. They eventually fell in love and started dating.

Janet and Raven got married in August 2000 at a Mormon temple in Washington, D.C. They lived in south eastern Virginia. Everything seemed to be bright for the couple and Janet’s friends and family were very happy for her.

The couple found a job opportunity in a sports merchandise company and moved to North Carolina. They would soon start to experience marital problems. At the beginning just superficial stuff but Janet would be in shock when Raven approached her one day and told her he wasn’t happy in their marriage and that he had been having several affairs. He wanted out of the commitment and asked her to get divorced. They separated for a while but soon Janet would realize she was pregnant. This somehow pulled the couple together again and Raven promised he would do his best to make things work. A few months later they welcomed their son Kaiden.

Things had just started to look brighter for the couple in 2004 when Raven was caught stealing from the company they both worked at. The company pressed charges against him but no jail time was required. Janet was so embarrassed she had to quit her job. Again there was some tension between the couple, adding now the financial stress but they remained together.

On April 26, 2005, the night on the Abaroa residence seemed to be like any other. Around 8:00pm, Raven told Janet he was going to play soccer with his friends and he would be back home in a couple of hours. 25-year-old Janet Abaroa just got ready for bed and they said good bye.

Later that night, 911 receives a call from an altered Raven Abaroa telling them he’s found his wife Janet Abaroa shot to death. The 911 dispatcher sends police immediately to the Raven’s residence and once there they find Janet’s body. She was indeed dead but she has been stabbed to death, not shot. She had multiple stab wounds.

After investigating the scene, police found a couple of interesting things. First of all the baby had been home during the attack but was completely unharmed. There were also no signs of forced entrance to the house, and Janet’s engagement and wedding ring were sitting right on the kitchen counter. That was weird because if the crime was a robbery gone wrong, they would have taken the rings. There were things around the house that should have been targets for the criminals but everything seemed pretty untouched. The house didn’t even look like the scene of a robbery. When looking deeper, there were a couple of things missing indeed, these were Raven Abaroa’s laptop and his knife. Raven was a knife collector and one of his knives was missing.

Police started going through the house, room by room, they found a few pieces of evidence that would hopefully lead them to Janet’s attacker. There was a bloody footprint near Janet’s body, a fingerprint in the office closet and a bloodstain on the interior glass door at the side entrance to the house. No signs of struggle though.

After 24 hours of searching the Abaroa property, police confiscated financial records, a knife, a pawn shop ticket, and they also took the clothes Raven was wearing when he found Janet’s body.  He is a person of interest but he’s not openly a suspect.

A few weeks after Janet’s murder, Raven took his son Cadem and moved over 2000 miles away to Salt Lake city, Utah. He decided to separate from the investigation to the point when he stopped responding to requests for interviews from the police. He wasn’t really acting as a husband in pain.

Police didn’t have anything new to say at that point really. They had no evidence leading to any possible suspect. In August 2005, Janet Abaroa’s autopsy report was released; it’s revealed that at the time of her death she was pregnant. This was a new discovery; yes but not a real lead.

In 2007, after police says they can’t rule Raven out as a suspect, he goes on the public eye again to clear his name. He goes on the record with MC Wanted and tells the story of his relationship with Janet and how much they loved each other. Then things go quiet again.

In May 2009, police start talking to Raven Abaroa’s new wife, Vanessa Pond. She and Raven had met in December 2007. They crossed paths because their kids went to the same day care. They got to know each other; she thought Raven was very upfront about himself, very honest. She had found love of the good kind.  Vanessa knew what had happened to Raven’s wife. She asked him in many occasions if he had something to do with it. Even Vanessa’s parents asked him if he had murdered his wife but he always answered with ¨I loved my wife¨. Even when Vanessa didn’t believe 100% of what Raven said, she said yes when he proposed to her.

After she had made up her mind, there were a few things that would disturb Vanessa. First, she got a phonecall from Janet’s family telling her to ¨Run now¨. That Raven was a dangerous man and he was going to probably hurt her too. This obviously shattered Vanessa but she didn’t take the advice, she continued to believe Raven was a good man. Until her bridal shower day, when she and Raven got into an argument. Not only he was yelling and calling her awful names, he also jabs her in the chest with his fingers. Raven told her he didn’t care if she died, he wanted so bad to hit her, and he almost did. He took his hand and rushed it to Vanessa’s face stopping it right before it made contact. As she jumped from being scared, Raven laughed and left the room. Vanessa told the police she was in shock but still made it to the bridal party and decided to finally marry Raven.

On September 6, 2008, Vanessa and Raven got married. They went to Las Vegas to celebrate. Here’s where some other red flags pop up, Vanessa said that once Raven got intoxicated with alcohol, he started talking about Janet. He told Vanessa how mad he was after Janet’s death. He then grabs Vanessa and pulls her towards him to tell her ¨I will never hurt you.¨

Over the next few months, Vanessa would get to see Raven’s real personality. He started abusing her physically and psychologically, he also stated going around Vanessa’s family and friends to tell them how mentally unstable she was. Raven said that she was depressed and with suicidal tendencies. He said he believed she had bipolar disorder and needed to be institutionalized. Vanessa said she felt as if he was making everybody else believe she was unstable so if she turned out dead, it would all make sense. She obviously wanted to get divorced but was terrified of how he would react to this so she decided to wait for him to leave. And when he did, he took the chance to abuse her some more, the day he left, he took his son Cadem and said ¨Come on, we have to go. Mommy doesn’t want us anymore.¨

After Vanessa talks about all these things with the police, Janet Abaroa’s family starts putting more pressure on them too. They are demanding for Raven Abaroa to be taken to justice. So four years after Janet’s death, a new detective is assigned to the case. Charles Sole then starts going over the case from the beginning and it woulnd’t be long until he found some inconsistencies. The first one being that Janet Abaroa’s contact lenses case was open when she was murdered, implying that she hadn’t taken her contact lenses out yet. Which Janet’s family confirmed was something she did every night before going to bed. She was super strict about it. This was odd because Raven had told police that Janet was indeed getting ready to go to bed before he left for soccer the night of her murder.

Detective Sole also went through Raven’s explanation of events about that night. They had been changing everytime.

In February 2010, Raven Abaroa is charged with first-degree murder and Janet Abaroa’s body is exhumed and her remains show that she was wearing contact lenses as the detective had suspected.

The prosecution says it is a very circumstantial kind of case because there is not direct evidence. Whereas the defense says that there has always been direct evidence like the bloody shoeprint or the bloody fingerprint left in the crime scene. Things to which there was never a clear answer.

The prosecution based the case in Raven’s violent personality and his possible financial motives to murder his wife.

Benny Bradley, one of the earlier detectives on the case, said he believed Raven’s motive to murder his wife could be financial. He probably wanted the money from Janet Abaroa’s life insurance. It was weird to the detective how even when the couple was struggling a lot to pay the rent and even for food sometimes, Raven not once missed a payment on their life insurance policies.

It’s revealed during the trial that years after the murder, Raven claimed in a video that he had the knife that was missing from his collection on the night of the murder.

After five weeks interviewing 82 witnesses, the jury failed to reach a verdict. The judge declares it a mistrial.

In march 2014, the defense and the prosecution reach a deal, before a second trial takes place. Raven Abaroa enters an Alford plea agreement for voluntary manslaughter. With this plea, Raven avoids the life sentence and is sentenced to 8 to 10 years, including time served. He was released from prison on Christmas day 2017.

What is an alford plea?

In United States law, an Alford plea, also called a Kennedy plea in West Virginia, an Alford guilty plea, and the Alford doctrine, is a guilty plea in criminal court, whereby a defendant in a criminal case does not admit to the criminal act and asserts innocence, but admits that the evidence presented by the prosecution would be likely to persuade a judge or jury to find the defendant guilty beyond a reasonable doubt.