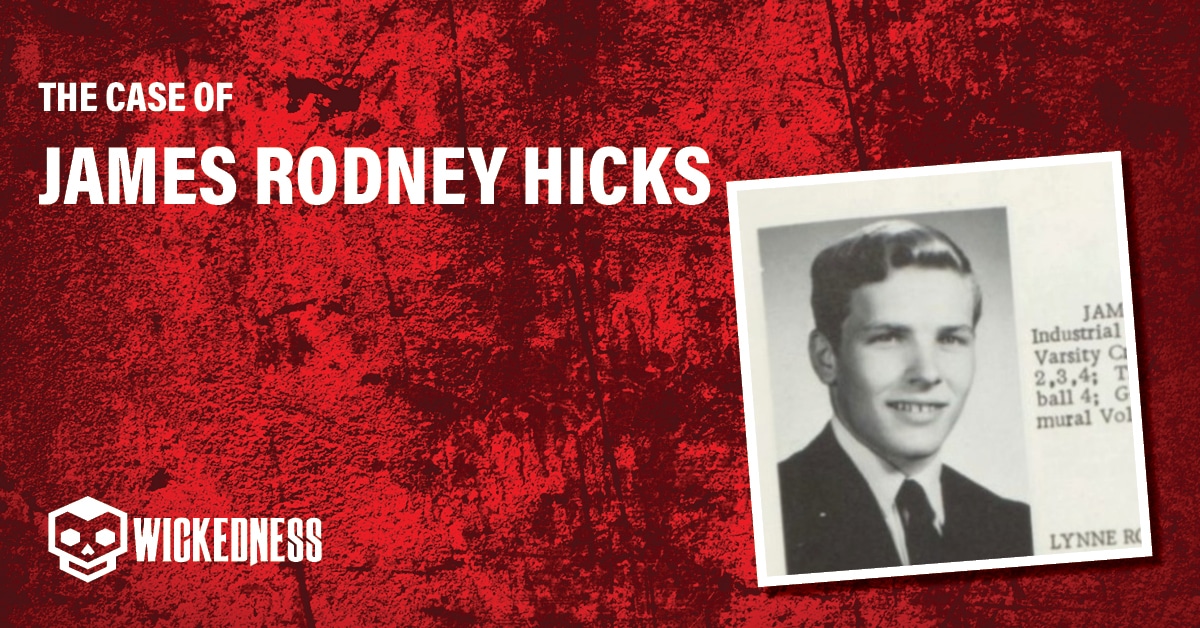 James Rodney Hicks, is a serial murderer, his cases took place widely in time. He is known for the most well-hidden murders in the USA. He was born in a pure family. His childhood was coming in Etna, Maine. As a child, he was known for cruelty toward animals. His future wife met him on a school bus in Carmel, Maine. Her name was Jennie Cyr. A few years later she became his victim. They married in 1970 and moved to Jennie’s parents’ house in the Carmel-Etna area. A year later a daughter Veronica was born. At the time, they had financial problems and they were hard to deal with. James finished school and went to work at a local wood mill. After a while, he left the factory and started looking for a new job. He tried to work in construction and joined a labor union. Family life was stressful. James was unfaithful to his wife. The young family applied for divorce. However, the divorce process was suspended. Jennie was pregnant. The second child in Rodney’s family was born. A boy was named Seth. Jennie was a kitchen worker and began studying for certification as a nurses’ aide. She was a loving mother and a responsible worker. James worked different jobs. Rodney’s family had no time to look after their children. They hired a nanny, Susan Matley. James courted the fifteen-year-old nanny as well and was accused of sexual harassment. Susan said about it to Jennie. At the dinner, where all family was together, James tried to kiss his wife, but she did let him. He did not like it and threw his dishes into the sink. Susan left the house and did not return until 4:00 AM.

The first crime was hidden

At around 2:00 AM the neighbor heard the couple quarreling, he heard the cry of the child. The neighbor also heard James’s wife asking him to stop because he might kill him. The light was on, and after a while, the neighbor heard sounds like sawing wood. When Jennie came home she saw James was watching TV, and Jennie Hicks was sleeping. Her pose was strange. Her face was covered with hair. Susan went to her bedroom and pretended to be asleep, she heard the shuffling of shoes and creaks of opened trailer door. She was afraid to investigate what exactly this was.

The next day it turned out that Jennie HIcks was gone. She left her glasses and purseon on the kitchen table. It was strange because Jennie had poor eyesight. She left all the clothes she had. Only the heifer dress in which she was last night disappeared. It was not known where Jennie went. Four days later Jennie Hicks’ parents noticed that James was scratching his hand. He appealed that he had scratched at the poison ivy at his work. But at work, there was no opportunity to meet poison ivy. James reported Jennie Hicks missed.

No one saw her again. Many years later, he provided evidence that she sent gifts to her children. They even saw each other in Newport. He also said that he saw her in the car with her new husband. Jennie Hicks said that she would travel to Florida and she was wondering how the children are.

Jennie’s mother turned to the police to find her daughter. But there was no sign or evidence of James’s guilt. His guilt was not proved due to a lack of evidence. What happened to Jenny has not been known for six years. Such disappearance without contact with relatives was a hint of her death during the disappearance.

After five years of his wife’s disappearance, Jimmy meets Jerilynn Towers. They fall out at a Gateway Lounge bar and then get out together. So said the bartender who served them. However, he did not see whether they were in the same car or not. After they left the bar, he saw her as she was leaving the magazine. James offered to go to the Newport swimming hole. After swimming, Jerilynn entered his car in the front, and James entered from behind and strangled her to death. In 200 Mr. Hicks confessed that he dismembered her body and dripped them on his own near his house.

But at the time there was no evidence of Hick’s involvement in the murder. In 1982 the second investigation started. The detective learned from the postman that his wife disappeared about five years ago. He communicated with Hicks, but he denied his involvement in the disappearance of both women. Neither the body or the murder weapon was never found. However, Hicks was charged with double murder. Police arrested him. The jury played an important role in proving his guilt. The lack of direct evidence caused judicial difficulties. The jury argued over his guilt for nine hours. The jury returned a verdict of guilty in the fourth-degree – present day manslaughter. James Hicks was convicted in 1986 to 10 years in prison and served six years. He was released from prison in 1990 and is described to have displayed model behavior.

After he released from prison, Hicks had a couple of relationships and made a few kids. In 1994 he met 40-year-old Lynn Willette. She was from Orrington. With Willette he worked at the Twin City Motel in Brewer. They rented an apartment on a South Main Street. He killed her. This time he also escaped arrest because there was a lack of evidence. He again managed to cover up the murder. In meantime, Hicks attacked an old woman in Lubbock. He put his gun to her head, forcing her to write a $1,250 check to him. He forced her to write a death note to stage a suicide. Hicks tied her up and took her to his basement to give her sleeping pills. But the victim escaped. The police arrested him.

In 1996 Hicks confessed to Lynn Willette’s murder. He offered to lead the detective to Willette’s remains. Then Hicks admitted to killing Towers and his first wife, Jennie. Also, Mr. Hicks pleaded guilty to aggravated robbery of a Lubbock woman. The victim’s remains were found at Hainesville Woods, the outskirts of Houlton, Maine adjacent to Route 2 and Interstate 95. Other remains were discovered to be dismembered and in a bucket buried in a shallow grave.

Sensational trial took place. James Hicks pleaded guilty. He was sentenced to 55 years in prison. This means that he will be imprisoned for life. He is currently serving prison in Maine State Jail.