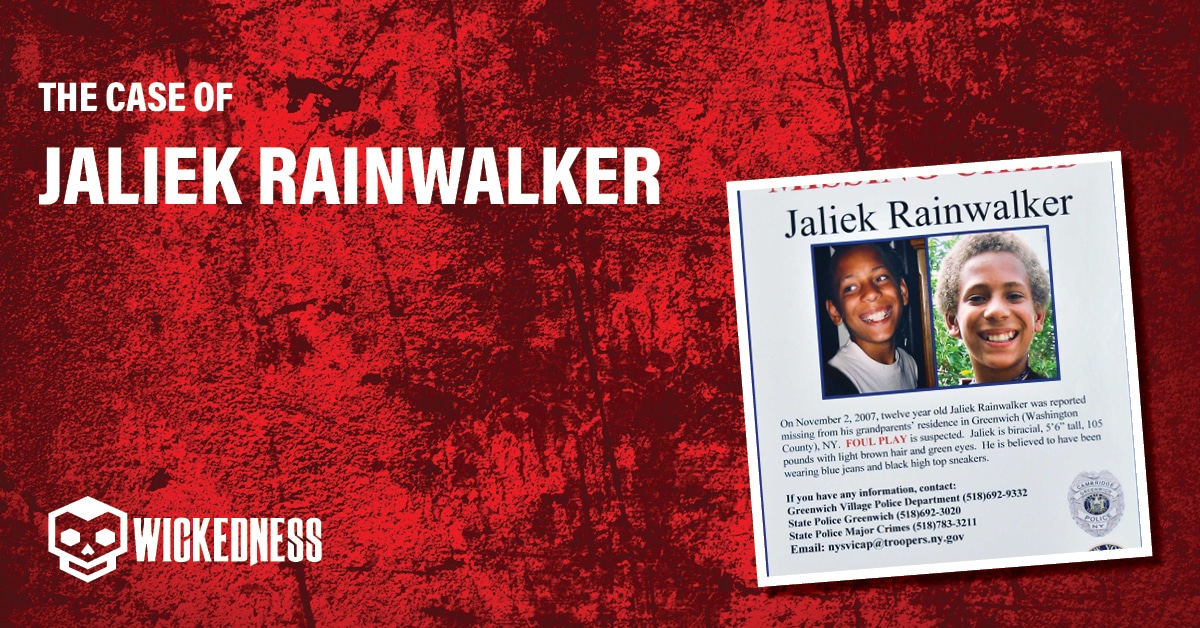 Jaliek L. Rainwalker was born on the 2nd of August 1995. He was born to a drug-addicted mother addicted to cocaine. When he was just two days old, he was put up for adoption and spent his early childhood in 6 different foster homes until he was seven years old. The foster parents said he was violent and decided not to adopt him after he attacked their daughter. Jaliek Rainwalker liked skateboarding, books, and music. He was also homeschooled and had two half-brothers who lived in Albany. Jaliek has a slight speech impediment causing him to pronounce the letter r like a w.

In 2002 Jaliek went to live with the Kerr-McDonald family. They adopted him in 2004 when he was nine, and he lived with them in their rural home in Washington County. They said he had violent temper tantrums and his four siblings feared him.

On the 23rd of October 2007, Jaliek’s adoptive father called a crisis hotline saying Jaliek was out of control and that he had threatened a small child in his homeschool group. His mother feared him and no longer wanted him in their home. They were trying to figure out how to reverse the adoption. The crisis worker Stephen spoke to said it was impossible to reverse the adoption and suggested they try respite care instead. This is where he is sent off to another family for a short period of time. Jaliek was sent to the home of Tom and Elaine Pearson licensed foster parents who had provided respite care for him in the past. They kept Jaliek until November 1st and then gave him back to his adoptive father, who was to send him to another resite home the next day. That day, Jaliek Rainwalker was reported missing by his adoptive parents, Stephen Kerr and Jocelyn McDonald.

The disappearance of Jaliek Rainwalker

On the 2nd of November, 2007, Stephen had gone in to check on Jaliek at 7 am. He thought he was sleeping in his bed. When he went back in a bit later, at around 7:30 am, he noticed that items had been put in the bed to make it look like someone was sleeping. Stephen said that Jaliek had left a note behind that read,

“Dear everybody, I am sorry for everything. I won’t be a bother anymore. Goodbye, Jaliek.”

Stephen reported his son missing at 8:57 am.

At the time he went missing, his hair had blond highlights and was styled in an afro. He was last seen wearing a bright yellow fleece, a grey t-shirt with an image of a dragon on the front, blue jeans, and black canvas high-top sneakers.

An extensive search of the area turned up no indication of Jaleks whereabouts. Within a few days, police ruled that foul play could have been involved since it is unlikely a child of that age could survive on his own.

Jocelyn took a polygraph. However, Stephen refused to take one multiple times. So at the end of November, the police focused on Stephen Kerr. They obtained his bank account statements and cell phone records. Ground searches that had been going on for a while began to end, turning up no leads. Cadaver dogs searched for the boy’s body but found nothing.

On January 14, 2008, Stephen Burrell Kerr was named a person of interest in the disappearance of Jaliek. Police said that they had surveillance camera footage of Stephen driving his van around after midnight on the night of Jaliek’s disappearance. He had previously told police that he was asleep at this time. Stephen would not let the police search his van and soon after got rid of it. In March 2008, cellular phone records indicated that Stephen had taken a different route to the house than he had initially said.

In February 2008, the police searched the grandparent’s home where Jaliek Rainwalker stayed the night he went missing. During the search, the police ceased a typewriter and a computer.

No one has been charged with anything in this case. However, it is expected that foul play was involved. The Kerr-McDonald family alternatively suggested that Jaliek may have run away to live with an African-American family as they said he always identified himself as black instead of biracial and had previously expressed the desire to live with other African- Americans after being placed with white families and feeling out of place.

What happened to Jaleik Rainwalker?

12-year-old Jaliek Rainwalker was last seen at a home belonging to his adoptive grandparents on November 1st, 2007. He was reported missing the next morning at 8:57 am by his adoptive father, Stephen Kerr. Jaliek remains missing today. It is expected that foul play was involved, but no remains or indication of his whereabouts has been discovered.