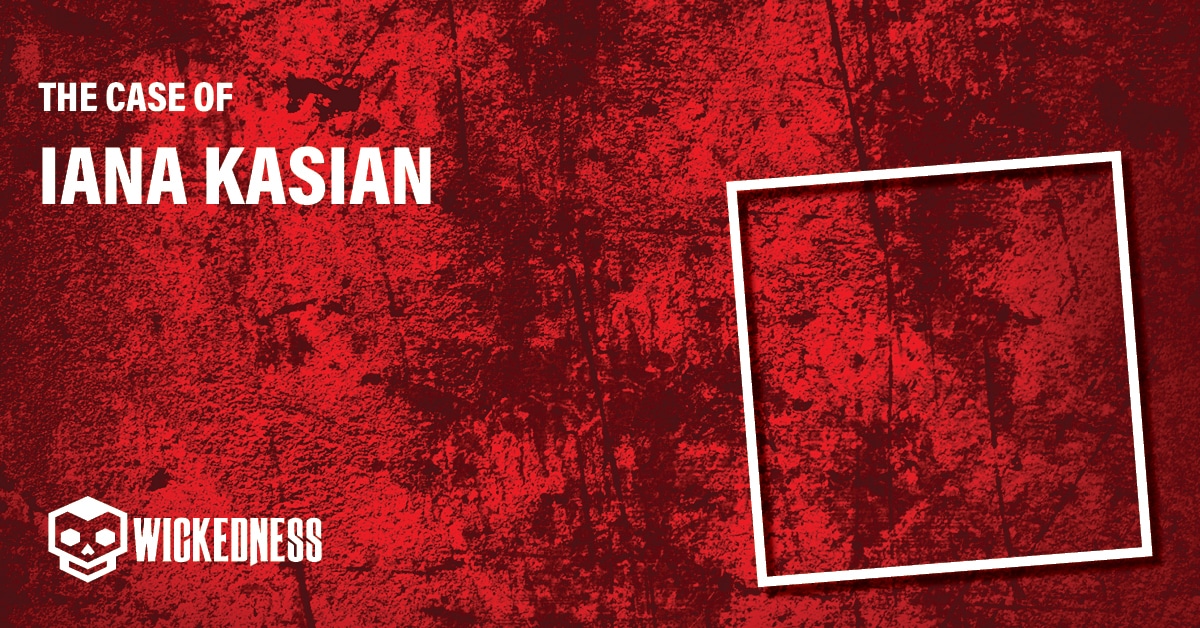 Iana Kasian, A Migrant From Ukraine

Iana Kasian was born in Kiev, Ukraine, on January 27, 1986. According to her mother, Olga Kasian, her daughter was a very cheerful child, who lived a fairly normal childhood.

Iana lived most of her life in Ukraine, where she studied law and started working as a prosecutor for her country’s tax service. Although she had a stable life, she had other things in mind for herself.

In 2014 she migrated to the United States to start a new life in Los Angeles, California, to improve her English, perhaps start a family and having access to better opportunities.

Iana Kasian was very attractive; her dark hair and features led her to think that perhaps she could have a job opportunity as a model and be able to make a living from it.

About a year after her arrival in the United States, Iana met Blake Leibel, who dazzled her with trips, dinners and expensive gifts. One of those gifts was even a Mercedes convertible.

He proved to her that he was a stable and successful man, that he could take care of her, and that he would live a lap of luxury. Iana Kasian’s romantic life seemed like a fairy tale, so she decided to move in with Blake in his Beverly Hills apartment.

That same year, Blake proposed to her and sometime later, Iana discovered she was a couple of months pregnant. Olga Kasian, her mother, recalls that Iana was excited about becoming a mom very soon.

Iana Kasian’s mother traveled to Los Angeles to accompany her daughter for the birth of her granddaughter. In 2016, with a newborn baby girl in the family, everyone was very happy.

Although Blake also seemed very happy with the arrival of his newborn daughter, his attitude suddenly began to change.

That’s how Iana began to learn some facets of Blake that she had no idea about. Her partner’s dark secrets began to come to light and little by little she realized that their relationship had been built on lies.

On May 23, 2016, Iana and Olga were doing some baby shopping when she received some text messages from Blake. Iana told him she had to go see him; Olga said goodbye to her, not knowing it would be the last time she would see her alive.

Three days later, Iana Kasian was found dead. She was the victim of a gruesome murder.

Everything seemed to be going very well between Iana Kasian and Blake Leibel; they had a life of luxury, were in love, and welcomed their first daughter. However, after her birth, things began to change.

What Iana didn’t know was that Blake had been separated from his ex-partner for only a short time and had two children before that.

After the baby’s birth, Blake began to express his concern about the financial situation of his brother Cody Leibel, who was having problems because of his gambling debt.

Some text messages written by Blake to a friend said that his brother Cody owed a lot of money due to poker games and that he feared a Russian mobster would hurt them.

Leibel began to appear stressed and very controlling with Iana. They were constantly arguing and had problems regarding their sex life. Iana was only a few weeks after giving birth, so she was not yet comfortable to start having sex.

Living with Iana and a few days after the baby’s birth, Blake began a relationship with another woman named Constance; however, his affair with her did not last long. Constance accused him of sexual assault a few weeks later, and Blake was arrested.

Iana, however, posted bail to get her fiancé out of jail. After this, tension between the couple grew; and Blake even convinced Iana to leave the baby with her grandmother Olga for a few days so they could get their relationship and sex life back on track.

On May 23, 2016, while Iana and her mom were shopping, she received several text messages from Blake. Without giving her mom any explanation, Iana told her that she had to leave to meet him; that was the last time she saw her.

On May 24, 2016, Olga called Iana several times; however, she did not answer her calls or her messages. This seemed very strange to her, since her daughter always answered. Besides, Iana had left her baby for her to take care of.

Olga already knew about the controlling attitudes of her daughter’s fiancé and had a bad feeling, so she called the police. As she did not speak English, she was left on hold for a long time, as they needed to find a Russian interpreter to be able to understand her.

Finally, Olga Kasian was able to report her daughter missing. By that time, although she feared the worst, she was hopeful that she would find her daughter alive.

Although Olga had called to report that her daughter was not responding to messages and calls, it took several hours for the police to act. For this reason, she decided to go herself to the apartment where Iana lived, but they did not answer the door.

Olga even tried to force her way in, but was unsuccessful. She rang the doorbell several times and no one answered.

She decided to call 911 again to tell the police that Iana was still missing and that she feared her life was in danger. Officers approached Iana’s residence, but there was no compelling reason to force entry into the apartment.

It was not until May 26, 2016, that the police decided to enter the apartment forcefully. They broke down the front door; however, while walking down the hallway, they came across another door, which they also had to break down.

Upon entering, they noticed blood stains on the floor; they then went to the master bedroom, which was locked inside. Blake from the bedroom yelled to the police that he was not coming out of there and that Iana was not with him.

The police searched the rest of the apartment, including the guest bedroom, but they did not find Iana anywhere, so they assumed she was with Blake inside the bedroom.

After several minutes of negotiation, the police had a friend of Blake’s call him to convince him to come out of the bedroom. This friend went to the apartment and talked to him for a while insisting that he come out and cooperate with the police.

Finally, Blake Leibel came out of the room, wearing only his underwear. That’s how they found the lifeless and naked body of 30-year-old Iana Kasian on the bed.

Blake was immediately arrested, although he told the police, “well, now they’re going to have to investigate who did it”.

The police were faced with a heinous crime, and the detective in charge of the case even stated that he had witnessed several crime scenes before, but nothing like that.

Iana was bleeding to death on the bed, covered with a Mickey Mouse blanket, skinned, and with bite marks all over her body. Every wound was evidence that it was a human bite mark.

The blood-spattered bedroom showed that Iana had been the victim of a torture murder. Balke tore off her entire scalp and cut off part of her ear.

He also bit her left cheek and beat her several times, for which the police found a mangled body. Her collarbone was fractured.

Forensic examinations later revealed that Iana was alive during more than 8 hours of torture. She was even alive while she was bleeding due to a scalp injury.

Police found pieces of Iana’s skin all over the room, in the bathroom drain, and the kitchen. It was found that Blake attempted to clean up the crime scene.

After murdering her, Blake took the bloody clothes and sheets and stored them in black bags that he hid in the basement of the apartment complex. He also kept in them the hair he had pulled out of Iana’s head and part of her ear.

Blake Leibel, a Graphic Novelist With a Double Life

Blake Leibel was born in Toronto, Canada, on May 8, 1981. Blake came from a Canadian family with important businesses in the country related to construction.

Along with his brother Cody Leibel, he grew up in a real estate family, with a very good position and a life of luxury.

With the support of his father, Lorne Leibel, Blake decided to start a career in Hollywood, in the film industry. He had the opportunity to direct a movie and even collaborate in a television show based on a Mel Brooks movie.

However, he was known, above all, for being a graphic novelist. Until the time of the murder, his most popular creation was a graphic novel, which he called “Syndrome.”

Blake married and had two children with a woman. Days after he separated, he began a relationship with Iana Kasian, without having divorced his ex-partner.

For years he led a double life, hiding his past relationship and even his children. He also had several partners while he was living with Iana.

At the time of his arrest, Blake had marks on his face and arms, clear signs that Iana had tried to defend herself. However, he never admitted to murdering her.

No other person’s DNA was found, only Iana’s and Blake’s, so that was sufficient grounds to charge him with murder.

The murder trial began in June 2018, and the prosecution used as evidence and argument the graphic novel that Blake Leibel had written months earlier.

According to the prosecution, Blake used his graphic novel “Syndrome” as inspiration to commit the vicious murder. Their arguments were based on the fact that Blake took the idea of what appeared in the book to do the same to Iana.

Olga Kasian declared that what motivated Blake Leibel to murder his daughter was that since the baby was born, all the attention was for her and that they did not have as many sexual encounters as before.

In June 2018, days into the trial, Blake Leibel was found guilty of the first-degree murder of Iana Kasian, plus charges of torture and mutilation.

The judge deliberated with a unanimous decision due to the inconceivable cruelty with which the murder was committed. He was sentenced to life in prison without the option of parole.

In February 2019, a judge ordered Blake Leibel to pay the $42 million to Iana’s family. So far, Iana and Blake Leibel’s daughter lives with her grandmother, Olga Kasian.

What happened to Iana Kasian?

Iana Kasian was brutally murdered by her fiancé Blake Leibel.

What did Blake do to Iana Kasian?

Blake Leibel scalped, beat and tortured her until she bled to death.