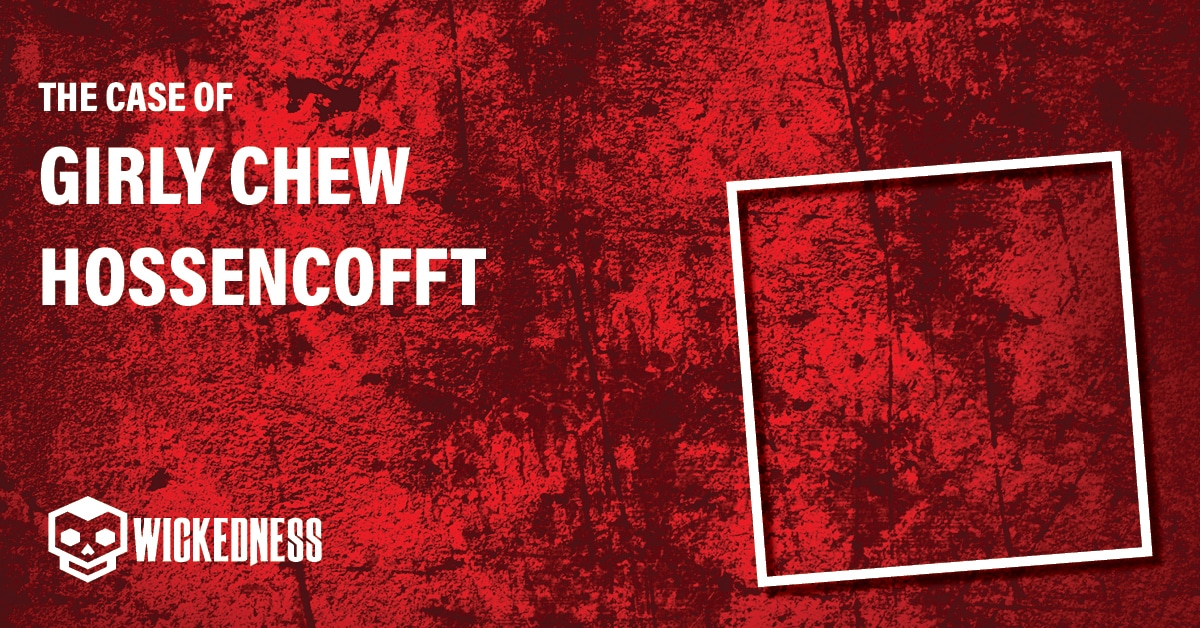 Girly Chew Hossencofft was born on August 27, 1963, in Malaysia. Girly visited the United States in the early 1990s, where she met Diazien Hossencofft at SeaWorld. In 1993 Girly and Diazien married. Her friends described Girly as a self-assured woman who had visited the United States in 1992 in search of a better life. Girly Hossencofft and her husband Diazien resided in Albuquerque, New Mexico, where Girly worked as a bank teller at Bank of America. In 1999 Girly moved out of their home and filed for a divorce after a domestic violence incident where Diazien had threatened to kill her. Girly told two of her coworkers that she was afraid of her husband. Girly also later discovered that he had been using a fake name, and he was not a doctor like he claimed to be.

The Disappearance of Girly Chew Hossencofft

On September 10, 1999, Girly Hossencofft did not show up for work at the Bank of America, where she worked as a bank teller. Her coworkers were immediately concerned by this as Girly had previously told them that she was worried for her safety from her husband, Diazien. Girly Hossencofft’s coworkers reported her missing that day.

As Girly eventually discovered, Diazien was not his real name. Diazien Hossencoffy was born Armand Chavez on March 5, 1965, in Houston, Texas. He falsely claimed he was a thoracic surgeon with degrees from the University of Tokyo and Cornell Medical College. In reality, Diazien was a con artist. He had been expelled from medical school. Diazien tricked people into believing he was a geneticist who had leukemia. He sold fake cancer treatments to clients and had people pay thousands of dollars for anti-aging injections and his cancer cure. In 1999, while still married to his wife Girly Hosencofft, he was engaged to three women, including a woman named Linda Henning.

Linda Henning was born in Hollywood, California, on October 10, 1953. Upon graduating high school, Linda worked as a fashion model. Later in life, she became a successful fashion designer. In 1999 Linda became engaged to Diazien. The pair shared an interest in government conspiracy theories and UFOs.

In July 1999, Diazien told Linda he was moving to South Carolina to live with someone else. Linda, however, did not end the relationship here.

Upon searching Girly Chew’s apartment, investigators noticed the smell of bleach. Using luminol, they found a considerable amount of blood evidence. There were six small blood stains on the carpet and one blood smear on the couch in Girly’s apartment that could be DNA tested. Four of the carpet stains and the couch smear matched Linda Henning’s DNA. The other two blood samples on the carpet were Girly Chew Hossencofft’s.

Days after Girly’s disappearance, her clothing was found on Highway 60 southeast of Belen, New Mexico. Her blood-splattered pink and orange shorts, green and white blouse, and green panties were wrapped in a bloodstained gray tarp. Along with Girly Hossencofft’s clothing, investigators discovered a piece of duct tape with Linda Henning’s hair attached. Girly’s purse was also found discarded on a nearby street. Particles of glitter were found on the tarp that matched the glitter found in Linda’s apartment. The blood on the items belonged to Girly.

Investigators investigated Linda Henning and searched her home. In Linda’s home, investigators recovered a ninja sword in her attic. The sword was purchased the day before Girly was reported missing. Forensic evidence showed that there was blood and DNA on the sword. Diazien’s blood was on the handle, but the blood on the blade was too degraded to test.

It wasn’t long, and police had a lead suspect in the case. Everyone police spoke with told them it was Diazien and that Girly had been fearful of her safety from him before her disappearance.

Diazien Hossencofft was arrested on September 21, 1999, in Charleston, South Carolina.

In January 2002, to avoid the death penalty, Diazien Hossencofft pleaded guilty to the murder of Girly Chew Hossencofft. In exchange for his plea, Diazien was sentenced to life in prison plus 61 years. He is serving his time in Wyoming State Penitentiary.

Despite Girly Chew Hossencofft’s body never being found, it is believed she was murdered. This is based on the amount of blood found in her apartment. It was concluded that a woman of Girly Hossencofft’s size could not have survived such an attack.

What happened to Girly Chew Hossencofft?

Girly Hossencofft was reported missing on September 10, 1999, by concerned coworkers when she failed to show up for a bank shift. Girly’s body was never found, but her case was ruled a homicide due to the amount of blood found at the scene. It is unknown how 36-year-old Girly Chew Hossencofft was murdered.

Who was convicted of the murder of Girly Hossencofft?

In January 2002, to avoid the death penalty, Diazien Hossencofft pleaded guilty to the murder of his wife, Girly Hossencofft. Diazien was sentenced to life in prison plus 61 years. He is serving his time in Wyoming State Penitentiary. One of the women he was dating at the time, Linda Henning, was also found guilty of the murder of Girly Hossencofft. Linda was sentenced to 73 years in prison and spared the death penalty.