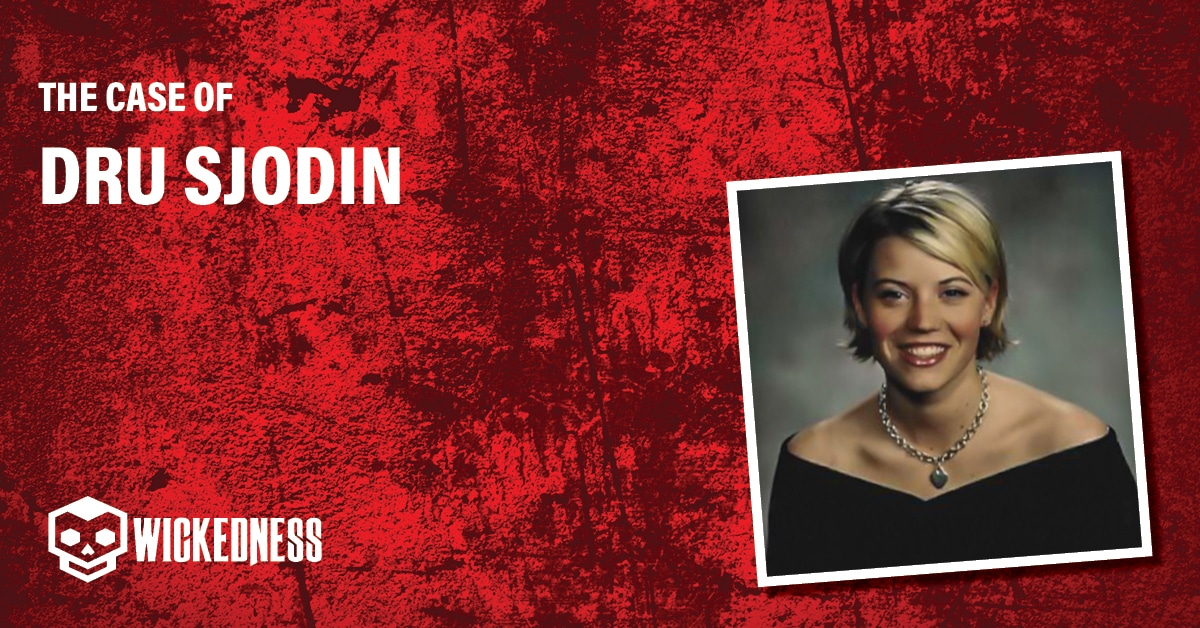 Dru Katrina Sjodin was born on September 26, 1981 in Minneapolis, Minnesota. She graduated from Pequot Lakes High School in the spring of 2000. Dru was known for being an artistic beautiful girl who loved painting and sports since she was a little kid. She practiced basketball, volleyball and golf. Dru attended the University of North Dakota in Grand Forks. Dru was part of a sorority called Gamma Phi Beta which had a program to help underprivileged teens.

20-year-old college student Dru Sjodin was very committed to making some money because she was looking forward to taking a trip to Australia. She had two jobs, one as a seller in a Victoria’s Secret store and a second one, in a nightclub called ¨El roco¨, where she was a waitress.

The afternoon of November 22, 2003 was like any regular day. 22-year-old college student Dru finished her shift at the Victoria Secret store located in the Columbia Mall. She was looking forward to getting back to her flat and take a nap, she knew the night at the bar she worked at was going to be very tough. But before leaving the mall, she went shopping for a bag she had been wishing for and she could finally afford it. After getting her new purse in Marshall Field’s, Dru started walking to the mall parking while talking on the phone with her boyfriend Chris Lang, in the middle of the conversation, the call abruptly ended. Chris thought nothing of it. Three hours later he received a call from Dru’s cellphone but when he picked up all he could hear was static. That call together with Dru being absent from work that night, were enough to call Dru’s parents and tell them what was happening.

Dru’s dad Allan Sjodin, drove to the shopping mall to see if he could find anything leading him to his daughter. When in the parking area, he found 22-year-old Dru Sjodin’s car, a 1994 Oldsmobile Cutlass, in the parking lot. Two things were strange for him: One, the car wasn’t locked; and two, inside he found Dru’s belongings including the purse she bought that day. This was enough to call the police and report Dru as a missing person.

Dru Sjodin was found with her hands tied behind her back and when running an autopsy she had signs of being beaten, stabbed, sexually assaulted, and had several lacerations including a five-and-a-half inch cut on her neck. A rope was also tied around her neck and remnants of a plastic bag were found under the rope, suggesting that a bag had been placed on her head.

Alfonso Rodriguez Jr. was born in 1953, in Laredo, Texas, son to migrant farm workers Dolores and Alfonso Rodriguez Sr. who in 1963 decided to settle in Crookston, Minnesota. He admitted to using many drugs during his youth and confessed to being abused by older women when he was a teenager, which created a hostile way to be against women in general. When he was 21, Alfonso committed his first sexual assault with a knife by attempting to rape a woman who asked him for a ride home.

Rodriguez had been released from prison May 1, 2003, after serving a 23-year prison term for rape, aggravated assault and kidnapping a woman. During his time in jail, he had a mental health evaluation and was diagnosed with severe anxiety, personality disorder with schizoid and antisocial tendencies. He had a long criminal record that included repeated sexual assaults against women. Rodriguez was released as a Minnesota Leve3 sex offender. which meant he was highly likely to reoffend.

Grand Fork police started their investigation where Dru’s car was found. They got very worried when outside the car, lying on the floor they found a knife sheath. Investigators confiscated the vehicle to see if they could find anything else.

A few days after the investigation started, police were able to trace the location from which Dru’s last call was made. It leads them to Crookston, Minnesota. Investigators then conducted a big search for Dru but all they found was a shoe that, according to Dru Sjodin’s roommate, belonged to her.

Investigators thought this abduction probably had a sexual connotation so they looked in the sex offenders list in the area and found a 50-year-old man who had been recently released from jail as a Level 3 Sex offender (he was likely to re-offend).  Thanks to CCTV from the mall, it was proven that Rodriguez had been there at the same time Dru was.

When interviewed, Rodriguez admitted to being in the Mall’s cinema watching ¨Once upon a time in Mexico¨ but when Police looked into it, they realized this movie wasn’t in any Billboard in the Crookston area, so Rodriguez had to be lying. That was enough to get a search warrant.

After examining Rodriguez Car’s they found some traces of blood with Dru’s DNA. They also found a 4 inches knife soaking in bleach. This knife fits perfectly with the knife sheath found earlier in the investigation.

After 5 long months of looking for Dru’s body, when snow was finally starting to melt, they were able to recover her body which aside from all the visible traumas, had hair that belonged to Rodriguez.  Since this became a federal case for being in between two states, North Dakota and Minnesota, the case was under the Federal Kidnapping Act. Which meant Alfonso Rodriguez Jr. was eligible to receive the death sentence.

The trial started on July 6, 2006, after previous hearings and appeals played by Rodriguez’s defense attorneys to get him out of death penalty eligibility. Alfonso Rodriguez Jr. was the first death penalty case in a century to take place in North Dakota.

Finally on August 30, 2006, Alfonso Rodriguez Jr. was given the guilty verdict for the murder of college student Dru Sjodin and formally sentenced to the death penalty on February 8, 2007.

Rodriguez finally admitted his guilt in a death row interview on June 28, 2013.

In 2021, the same judge who gave the death sentence to Rodriguez, overturned his sentence. It remains unclear when the resentencing will take place.

What is the ¨Dru Sjodin law¨?

On July 27, 2006, President George W. Bush signed the Adam Walsh Child Protection and Safety Act. This act included Dru’s Law, which, among other things, changed the name of the National Sex Offender Public Registry to the Dru Sjodin National Sex Offender Public Website (NSOPW), which provides information to the public on the whereabouts of registered sex offenders regardless of state, territory or tribal boundaries.