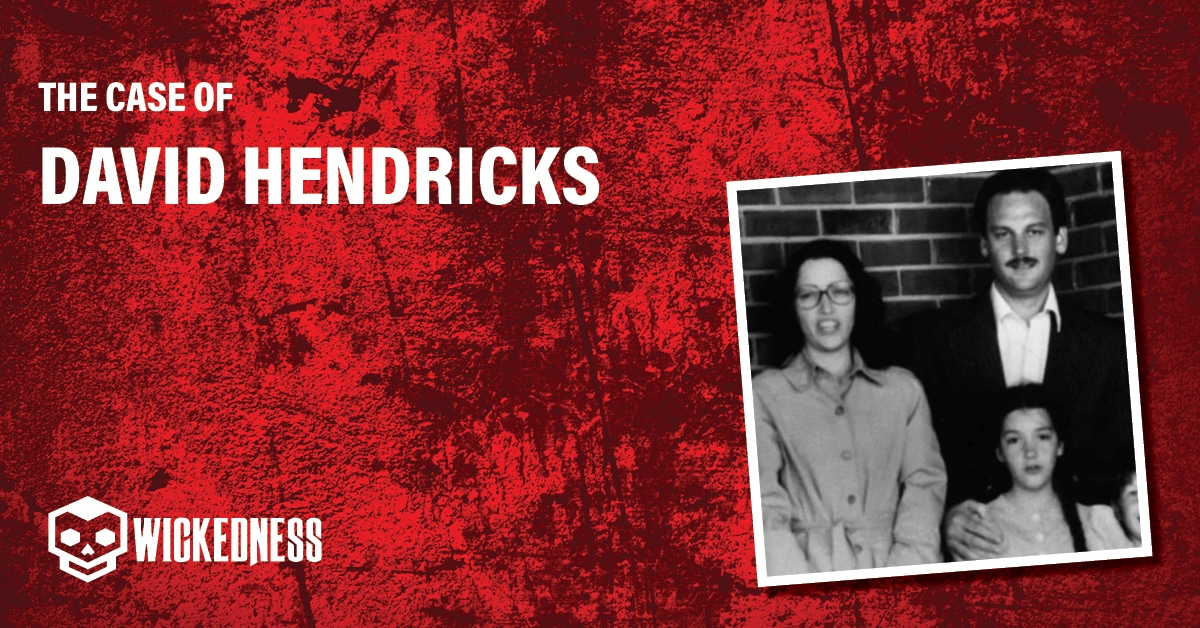 David James Hendricks was born in Morton Grove and raised in Oak Park, Illinois. He was a member of an exclusive Christian denomination and ran a very successful business in Bloomington, Illinois. His company sold an orthopedic back-brace that he had patented. He later brought a house in Bloomington and moved there with his family. David was married to Susan Hendricks who he had three children with. Rebekah, Grace, and Benjamin.

On November 8th, 1983, at 6.35 pm, the Bloomington police received a call from worried David Hendricks. David had called the police to say that he was away on a business trip and that he was concerned about his wife and children. David said that he had been trying to call them all day but had not received an answer. David had left his family the night before for a business trip. He was going hospital to hospital to sell his company’s back braces. He said he left his family sleeping at around 11 pm after kissing his family goodbye and drove straight through the night. He had tried to call them the next morning and got no answer. He wasn’t too worried at this stage. However, by that night, after not hearing from his wife at all, he became concerned and started calling around.

He gave the police his home address and said that the neighbor had knocked on the door and they weren’t home. He said that he was concerned that they had been in an accident. The police informed him that no accidents had been reported that day or night. After talking to the police, worried David checks out of his hotel room and begins the drive home.

At 10.30 pm that night, two welfare officers were dispatched to check the Hendricks family home. When he arrived, they noticed that the back door was unlocked. They were met with Susan’s brother and brother-in-law, who had decided to go around to have a look after receiving a worrying call from David. The officers told them to wait there while they went inside and had a look. They found all three kids together in one room when they got to the second floor. Rebekah, 9, Grace, 7, and Benjamin, 5, had all been savagely murdered. One of the officers described the scene by saying, “whoever did this to them is a monster.” The majority of the children’s wounds were to their necks and heads. A butcher knife and an ax were used to murder the children and were left right there in the room. In the master bedroom, the officers found Susan, also deceased, from ax and knife wounds.

When David arrived at the home, detectives and family members rushed to him to tell him what had happened. David instantly began to cry and said they were in heaven now. He was taken to a neighbor’s house, where he was questioned. He permitted them to search his office and home. Finally, David was moved from the neighbor’s house to the police station, where they asked him even more questions.

There were no signs of forced entry to the family home. The police collected David’s clothes on the day of the murder and searched his office and home. The crime scene was a bloody scene. There was no way the killer could have walked out without evidence on them, so police were looking for any sign of evidence. The murder weapons left next to the children’s bodies were completely wiped of prints.

Police started to suspect David after mentioning that it could have been a burglary gone wrong. But David hadn’t been inside the house or told anything about the fact that the house was ransacked. This made police believe that he must have been in the house.

Medical examiners found from an autopsy that the vegetarian pizza toppings that the children had for dinner were still in their stomachs. This led investigators to estimate their time of death as 9.30 pm while David Hendricks was still at home.

On the 5th of December, 1983, David Hendricks was charged with four counts of murder.

On the 21st of December, 1988, the jury found David Hendricks guilty of four counts of murder, and he was sentenced to life imprisonment. The judge indicated publicly that he was not personally convinced beyond reasonable doubt that David was involved in the murders.

After his conviction, David said that his brother-in-law was jealous of his money and success.

David’s brother-in-law, John, worked at a local hospital, and on the night of the murder, he came home with bloodied scrubs, asking Martha to wash them. When Martha asked him where they came from, John gave her the name of the doctor. It was later discovered that the doctor named was not working at the hospital at that time and denied giving him bloodied scrubs.

However, there has never been a reinvestigation into the murder of the Hendricks family.

A book was written about the Hendricks family, religious background, murders, and trials by Steve Vogel. The book is titled Reasonable Doubt.

Was David Hendricks guilty of murder?

On the 21st of December, 1988, the jury found David Hendricks guilty of four counts of murder, and he was sentenced to life imprisonment. The judge indicated publicly that he was not personally convinced beyond reasonable doubt that David was involved in the murders.

What happened to the Hendricks family?

Susan Hendricks and her three children were found brutally murdered in their home on the 8th of November, 1983.