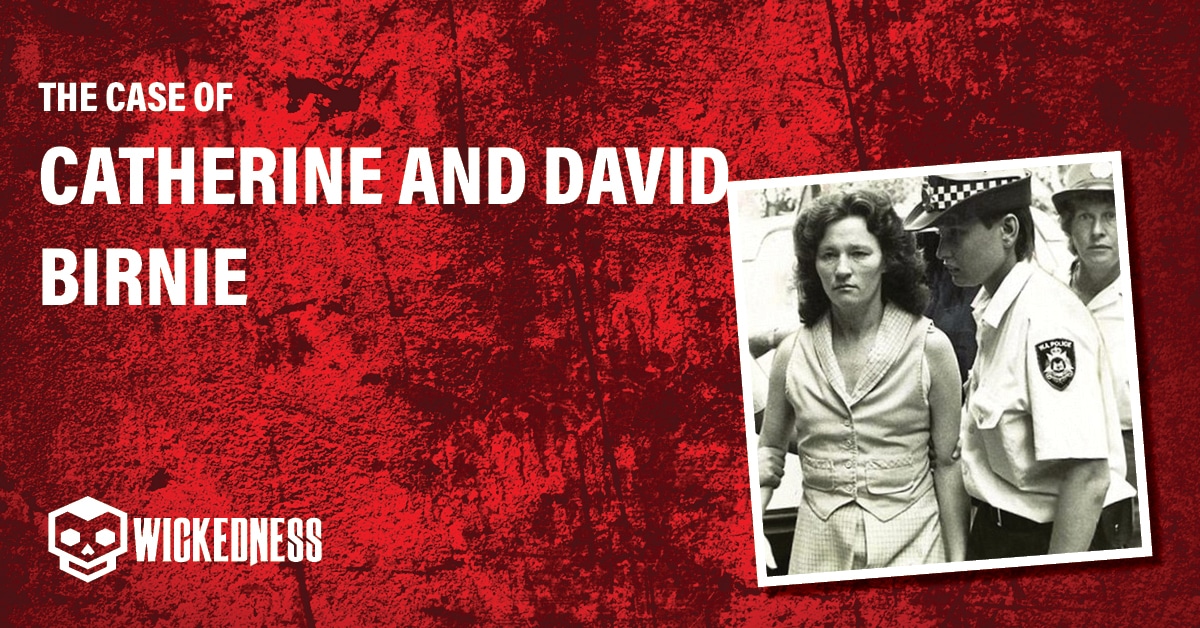 Who Was David Birnie?

Born in 1951, David John Birnie was from a highly dysfunctional household that was widely known to be a filthy place to live. He was the oldest of five siblings, his father was disabled, and his mother was a drunk with a horrible reputation. She would regularly sleep with taxi drivers instead of paying them and was rumored to be incestual with her kids as well.

Who Was Catherine Birnie?

Catherine Margaret Birnie born Catherine Harrison, was also born in 1951 and would lose her mother at the young age of 2 when she died during childbirth with a baby boy that sadly also passed away. Catherine would live for some time in South Africa with her abusive father, but her maternal grandparents would eventually take her in and she would go back to Australia.

When she was 12 years old, her aunt and uncle offered her a home.

Both 12 years old and both from troubled homes, David and Catherine met when Catherine Harrison moved in next door with her aunt and uncle. The two would immediately become interested in each other, and even before the age of 14, they would begin a sexual relationship.

The two would lose touch soon though because welfare officers eventually removed all the Birnie children from home and into foster care.

While traveling down their separate paths, David Birnie and Catherine Birnie would sometimes find their way to each other before losing touch again. During one of their encounters, the two would try to commit a robbery together but got busted and went to jail.

David  Birnie worked various jobs during this time but committed several smaller crimes, and he was imprisoned quite often. He built quite the criminal record and was known to be a sex addict with several disturbing fetishes. He eventually married and had a child but continued to see Catherine from time to time.

Catherine chose the more “domestic” route in life and ended up married to a man at the age of 21. She would have seven children with her husband, but one of them tragically died as an infant. Catherine wasn’t cut out to be a mother or a housewife, and she as well as the kids and her husband, made quite the unhappy family.

But They Would End Up Choosing To Be Together

In 1983, the two began a more consistent affair and Catherine soon agreed to leave her family to be with David. They would never marry, but Catherine would change her last name to Birnie. Soon after officially reuniting the pair moved into a house in the suburbs, 3 Moorhouse Street. Catherine Birnie was a 35-year-old mother of six children.

It Was Anything But A Happy Ending, For Anyone Involved…

At first, the couple’s activities stayed in their home. David Birnie required sex six times a day and was even reported to inject an anesthetic into his penis so that it would last longer. He still committed robberies and would occasionally go to jail. And in between all of this, the couple regularly smoked cannabis, injected heroin, and took prescription drugs.

And then David’s sexual fantasies would shift to something dark. He would begin imagining rape and murder. He asked Catherine Birnie to help him satisfy these disturbing desires, and she agreed.

This is the list of David and Catherine Birnie’s victims…

Upon her arrival at the house, she was chained to a bed, David then raped her while Catherine cheered him on. Then they loaded Mary into their car and drove out to a rural picnic area that was miles from their home. David raped her again before strangling her with a nylon cord.

The couple then buried her in a shallow grave.

Over the next couple of days, the teen was kept at the house as David and Catherine’s sex slave and was raped repeatedly. She was forced to write letters home saying that she needed more time away.

But then David got bored after a while and attempted to strangle Susannah, the teen fought him off, so he forced sleeping pills down her throat. Once she was knocked out David turned to Catherine with a nylon cord and told her to prove that she loved him; Catherine Birnie obliged and strangled Susannah with it.

When she entered the car, David would hold a knife to her throat and she would be driven to their home. She was tied to the bed, gagged, and raped repeatedly for days. But Catherine soon became jealous when she figured out that David was attracted to this victim.

The Birnie’s kept her in their home for a few days, forcing her to call back home to insist that she was fine. But Catherine got bored after a while, so they loaded Denise into their car and drove her to a plantation.

While David was raping Denise one last time at the plantation, he slit her throat. But Denise didn’t die immediately as he’d assumed she would. Catherine then went back to the car and grabbed a larger knife, she would give it to David Birnie upon her return, and he would stab Denise to death with it.

The Birnie’s Fifth and Final Victim Would Escape

Kate Moir, a 17-year-old girl, was lured into Catherine and David Birnie’s car just as the other victims had been but she would be the last. She immediately recognized that she was in danger so she asked the couple “Are you going to rape me or kill me?”

David’s chilling reply was, “We’ll only rape you if you’re good.”

Once they had Kate back at their house at 3 Moorhouse Street, she was forced to dance for them before she was raped twice. David and Catherine then gave her sleeping pills but Kate hid them under her tongue and didn’t swallow them.

The next morning the pair would make Kate call her parents and claim that she had gotten drunk the night before and this was the reason why she hadn’t come home. After the call, David would leave for work.

David Birnie and Catherine Birnie had forgotten to close the shackles on Kate’s wrists before he left, so 17-year-old Kate Moir realized she could be free if she just waited for the perfect moment. The moment came when Catherine went to go answer the front door.

The teen ran to the window, broke the lock, and climbed out. She frantically ran to three different houses for help, but nobody answered. She then found a shop and told a shopkeeper that she had been raped, that shopkeeper took her to a police station where she reported the crimes.

David Birnie and Catherine Birnie Would Be Put Away For Life

David and Catherine Birnie were convicted of four counts of murder, two counts of aggravated sexual assault, and one count of deprivation of liberty. They were both put away for life. 54-year-old David Birnie committed suicide in 2005 in Casuarina Prison but as of the time this article was written, Catherine Birnie is still alive in prison. Catherine is the longest-serving female inmate at Bandyup Women’s Prison in Caversham, Perth, WA.

Q: How did David Birnie and Catherine Birnie choose their victims?

A: We’re not sure what drew Catherine and David Birnie to certain women but we do know that Catherine would spot one she liked and then remark to David “I have the munchies.” If he liked the look of the girl as well, then he would reply, “I have the munchies too.” And the girl’s fate was sealed.

A: Yes, David Birnie was asked why he pleaded guilty he answered with, “It’s the least I could do.”