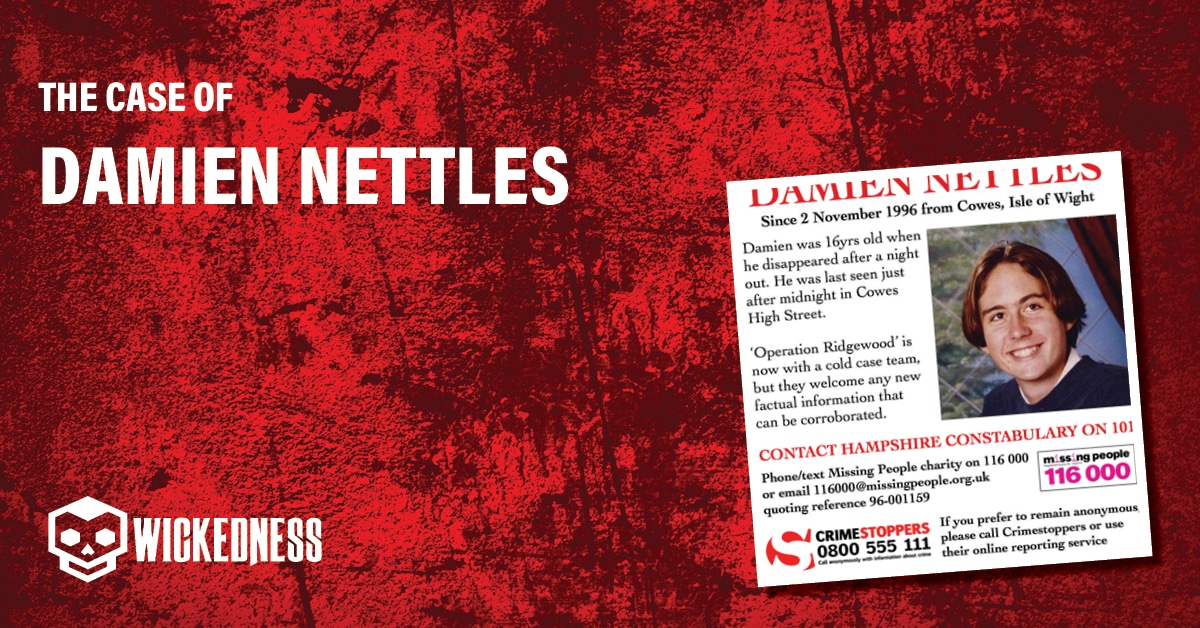 Damien Richard Nettles was born on the 21st of June, 1980, in Gleneagles Hospital in Singapore to parents Valerie and Edward Nettles. Valerie and her husband Ed had three other children, James, Sarah, and Melissa. The family lived in Isle of Wight just off the South Coast of England. Damien wanted to study marine biology after high school.

The disappearance of Damien Nettles

November 3rd, 1996, was a typical Sunday morning for the Nettles family in their home on the Isle of Wight, just off the South Coast of England. Valerie and Edward were up making breakfast for their family. Valerie sent 9-year-old Melissa upstairs to wake up her big brother 16-year-old Damien Nettles. But not even a minute later, Melissa came back downstairs, saying Damien was not in his bed or anywhere to be seen. Valerie walks up to check for herself. She notices that not only is he not there right now, but it looks like he was never there at all. Like he had not returned after going out with friends the night before. It was unlike Damien to miss curfew. He would always call to say if he was staying at someone else’s place.

The night before, on the 2nd of November 1996, Damien Nettles went to a party in East Cowes with his best friend, Chris Boon. Valerie and Edward had given him an extended curfew of a couple of hours to enjoy the party with his friend. He left East Cowes at about 9.30 pm and caught a ferry back to West Cowes with his pal Chris Boon. He was wearing blue jeans and a black fleece jacket.

On the morning of November 3rd, after hours had passed by and there was still no sign of Damien, Valerie called his school friend Chris, who he had gone out with the night before. Chris informed Valerie that Damien was not with him. They ended up bailing on the party, the pair left at 9.30 pm and caught a ferry back to West Cowes together. They then decided to try their luck and go to a few pubs on Cowes High street including the Harbour Lights pub instead however, being 16 they were unsuccessful this night, and with the miserable weather, they didn’t last long before deciding to go home. It was about 10.30 pm when they decided to head home. They walked together until they split up to go towards their own houses. This was the last time Chris saw Damien.

Valerie and Edward spend all afternoon looking for Damien, scared he may have slipped and fallen in the wet weather. After searching all afternoon and finding nothing, they decided its time to report Damien missing to the police. The police did not spring into action at all like Valerie expected them to. The police didn’t appear concerned at all.

Another day had passed, and there was no sign of Damien, and the police still had not done anything. Valerie, Edward, and friends and family took the investigation into their own hands. They created posters, began searching the area on foot, and retraced Damien’s steps for the night.

Valerie then learned from witness statements and from some surveillance she was able to track down how Damien spent the second part of his night. After splitting up with Chris instead of heading home, it appears Damien doubled back and went back to the pubs on Cowes High Street to try his luck again, this time without his friend. Damien looked older than his age so he would have had a better shot without his friend.

Damien was seen by a witness just outside the Harbour Lights pub at 11 pm. Another witness said he saw a young man matching Damien’s description in the Harbour Lights pub parking lot trying to get into a car. After being turned away from bars, Damien decided to get food at Yorkies chip shop at 11.34 am. Valarie obtained surveillance video from the chip shop. On the footage she saw Damien walk in the door. Damien appears to be chatting to others in the shop. When talking to the owner of the fish and chip shop, he said Damien’s behavior was off, he remembered him being pretty out of it. He said he wasnt drunk and that it seemed like more of a drug effect. Valerie agreed that there was something off in his behaviour. Damien walked out side looked side to side on the street before walking back in to get his fries.

A bus driver came forward and said that a boy matching Damiens description got on his bus at around midnight that night. The boy was holding fries and a camera, and asked to go to Cowes. The driver responded that he was already in Cowes. The boy then thanked the driver and left as if he believed he had made it to his stop even though the bus had never left. He then headed down a deserted street alone.

In January of 1998, 14 months later Hampshire police conduct their first search. Involved in the police investigation was tracking dogs and dozens of officers. The search ends up turning up nothing.

In 2007 a private investigator started working on Damiens case. As he dug he kept hearing the same names over and over. The names of the Isle of Wight’s notorious drug dealers. He also found numerous rumours that Damien got tangled up with them. Nicky McNamara’s name was always at the centre of it.

Another witness later claims forward to claim that he had seen a tall, skinny teen matching Damien’s description being pinned against a wall by Nicky McNamara, a notorious local drug dealer.

Nicky had a history of violent crimes and was reported acting suspiciously the next day. He died of a heroin overdose in 2002 in the home of his alleged partner Shirley Barrett. Shirley Barrett said he never told her anything.

16 year old Damien Nettles’ body has never been found, nor any evidence which would suggest that he left the island and is alive elsewhere. Fourteen years after Damien disappeared, Hampshire Police made eight arrests for conspiracy to murder but all were released without charge. Crucial records and evidence obtained by police, including the log of calls made to police that night, police notebooks, were lost, by the Hampshire police.

In 2001 the Nettles family made the move from Isle of Wight to the United States where Edward took a new job.

What happened to Damien Nettles?

Damien Richard Nettles was a 16 year old boy living in Isle of Wights. He went missing on the 2nd of November, 1996 and his body nor any evidence was ever discovered. Cruicial records and evidence was lost by the Hampshire police.