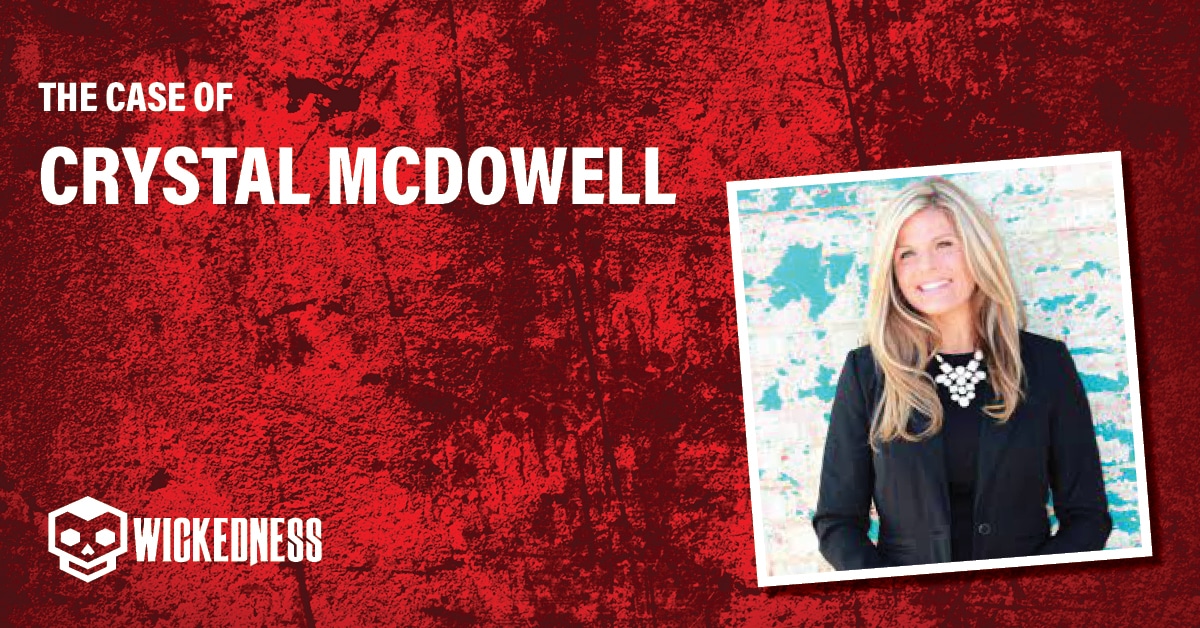 Who was Crystal McDowell?

Crystal Ann Seratte McDowell was born on October 26, 1979. Her childhood was troubled as she was born to drug-addicted parents. At the age of 11, both of her parents died six months apart and Crystal was an orphan.

However, according to the Chambers County D.A. Cheryl Lieck, Crystal was abducted at the age of 13 by a man who hasn’t been named. He kept her in a chicken coop and subjected her to numerous sexual assaults. It’s not known how long she was a prisoner there but she was able to escape. From this point on, Crystal’s uncle who was named Jeff Walters, helped raise her and because of this, he was extremely close to her. Even though she’d had a tough start in life, people described her as having a beautiful soul.

As Crystal McDowell moved into adult life, she found some stability and started working as a flight attendant. She enjoyed it as it gave her access to cheap flights and she got to travel all over the country. It was at this time that she met Steven McDowell. They fell head over heels in love with each other and their relationship moved quite quickly. They got married and even though their relationship appeared perfect from the outside, her family have said that they had problems. It was mainly due to her work as a flight attendant and there were rumors that she had numerous affairs. Despite these problems, the couple did have two beautiful children, a son named Madden Alexander McDowell and a daughter named Maui Lorelei McDowell.

After 10 years of marriage, Crystal and Steve decided to get divorced and this was finalised in June 2017. At this time, Crystal had quit her flight attendant career and she was now a real estate agent in the Houston area. She helped Steven buy a house and she even stayed with him while her own house was being remodeled. Crystal had also started dating again and soon she began a relationship with a local jeweler named Paul Hargrave.

It seemed that Crystal had everything figured out. A friendly co-parenting relationship with her ex-husband, two beautiful children, a new home, a successful career as a Baytown realtor and a new relationship in which she claimed she was “the happiest I’ve ever been.” So what went wrong?

Crystal McDowell was found by law enforcement after Steve McDowell agreed to show them where he had put her body. She had been hidden in a remote wooded area near to Baytown, Texas.

Unfortunately, Hurricane Harvey and local wildlife had got to her before police had, and her body was in a badly decomposing state. It’s been reported that Steve wouldn’t look at photos of Crystal’s remains because he didn’t want to remember her that way.

On the morning of August 25th 2017, Crystal left her boyfriend’s house at around 7.10am. This can be backed up by Paul’s home CCTV cameras which captured several grainy images of Crystal, including her backing her car out of his driveway and driving off. Crystal and Paul had been on a date the night before and she had stayed the night at his instead of Steve’s. However, she was headed to his to pick up their children before Steve started work. Crystal was supposed to have a property showing that day but it was cancelled because of the impending hurricane.

Paul tried to contact Crystal several times over the day but he never received a response. Later that day, Crystal’s family had gathered to watch a boxing match and they started to become concerned that Crystal wasn’t there and that no one had heard from her. Her family decided to report her missing the next day.

Crystal made it to Steve’s house to pick up the children but instead of an amicable conversation, an argument broke up. Steve knew that she had stayed the night at Paul’s and he was furious. Crystal told Steve that she didn’t love him any more and this seemed to be the thing that pushed Steve over the edge.

He grabbed Crystal from behind in a chokehold and began to strangle her. Crystal told him that he was scaring her but he didn’t stop. Instead, he tightened his grip until she stopped moving. He wrapped her head in a bag and the rest of her body in a blanket before putting her in the trunk of her own car.

Early the next morning, while his children were asleep, Steve drove to some nearby woods and dumped her body. He then drove her car to a nearby Motel 6 parking lot where he left the keys in the ignition and the windows down. Steve walked to a Walmart where he purchased a bike, a can of Red Bull and some cigarettes before heading home.

Not much is known about the life of Steven Wayne McDowell. He was 44 at the time of Crystal’s murder which means he was born in 1973. That’s the only information currently known about his life before he was married to Crystal.

Steve met Crystal when she was working as a flight attendant and he was described as a big kid. They went on to have two children together but their marriage only lasted for 10 years, ending in June 2017. There doesn’t seem to be a history of crime but it came out during the police investigation that Steve had threatened to kill himself, Crystal, and their two kids if they ever divorced. It seemed that the couple had worked through their issues though, from the outside, it seemed that they had a great relationship after the divorce.

Steve told her uncle Jeff that he had received a message from Crystal at 7.01am on August 25 which said,

“On my way. Do you have water? Looks like I may stay here with the kids. It seems just like rain.”

Steve then said that Crystal messaged him again and changed her mind, saying she was going to take the kids to Dallas but she never arrived to pick them up. Unfortunately, Hurricane Harvey put a stop to the usual physical searches that take place when someone goes missing. This didn’t stop her friends and family though, they were doing whatever they could do find evidence while the police concentrated on questioning her loved ones.

Police questioned Paul as he was the last one to see her alive. He told them what he knew but pointed them in the direction of Steve. Paul claimed that Crystal was afraid of Steve since he’d found out about her new relationship. The police offered Paul a polygraph test, which he accepted, but he failed.

One of Crystal’s cousins had received a tip from a member of the public saying that they thought they’d found her car. The cousin passed this information onto police and they found Crystal’s car partly flooded in a motel car park. With the windows down and the keys still in the ignition, police believed that this was bait for a car thief to run off with Crystal’s car. Unfortunately for her killer, the hurricane put a stop to that.

Cell phone activity from Crystal’s cell phone showed that the last ping to come from her phone was near to some marshland outside of Baytown. This led the Chambers County Sheriff’s Office to believe that her phone had been dumped.

Steve was questioned next and it soon became clear to police that while their relationship seemed idyllic from the outside, there were some problems. To begin with, Steve still wore his wedding ring even though they’d be separated for a while and their divorce was finalized 2 months prior. The police also found out that Steve had a sinister side, threatening to kill himself one year after they got married because Crystal wanted to leave him.

Steve also wasn’t happy that Crystal was going on a cruise with her new boyfriend. Originally, the cruise had been booked for her, Steve and their children but after Crystal met Paul, she asked Steve not to go because that would be too awkward. A friend of Crystal’s said that she was scared of Steve, believing he was tracking her movements. Steve was also offered a polygraph test which he also failed.

Police obtained CCTV images from the motel parking lot and they saw Crystal’s car being driven in at 6.37am on August 26, by a man who bore a striking resemblance to Steve. Five hours later, Steve was spotted driving his rare Mustang into a nearby gas station but instead of filling up, he walked over to the motel to check if Crystal’s car was still there. They also found surveillance footage of a hooded man riding a bike on the interstate highway near to the motel. Security footage from a Walmart showed a man matching Steve’s description buying the bike as well as some Red Bull and cigarettes.

Despite this, Steve still denied hurting Crystal. Authorities became worried for their children so D.A. Lieck took them into protective custody for their safety. Steve was told that he wouldn’t see them again unless he told police where Crystal was. Steve confessed the next day.

Even though Steve had confessed to murdering Crystal, he went back on this at his trial. He claimed that he’d “hugged her to death after sex”. In Texas, the punishment for this could have been as little as two years.

He might have been able to fool the jury if it wasn’t for the heartbreaking testimony of his daughter, Maui. It seems that she wasn’t asleep when her mom was killed and she told the court that she had watched her dad strangle her mom to death.

The jury rejected Steve’s “crime of passion” defense and it only took them three and a half hours to sentence Steve to 50 years in prison for the murder of his ex-wife, Crystal McDowell. He can be released in 2067 but he will be eligible for parole from 2042.

Where are Crystal McDowell’s children now?

From social media posts, it seems that the children of Crystal McDowell are safe and happy with a longtime friend of Crystal’s. The friend has spoken out and said that she wants to adopt them soon because Crystal was like a sister to her.

What did Crystal McDowell do for a living?

During her marriage to Steve, Crystal was a flight attendant. But shortly before their divorce, she quit this career and became a realtor in the Houston area.