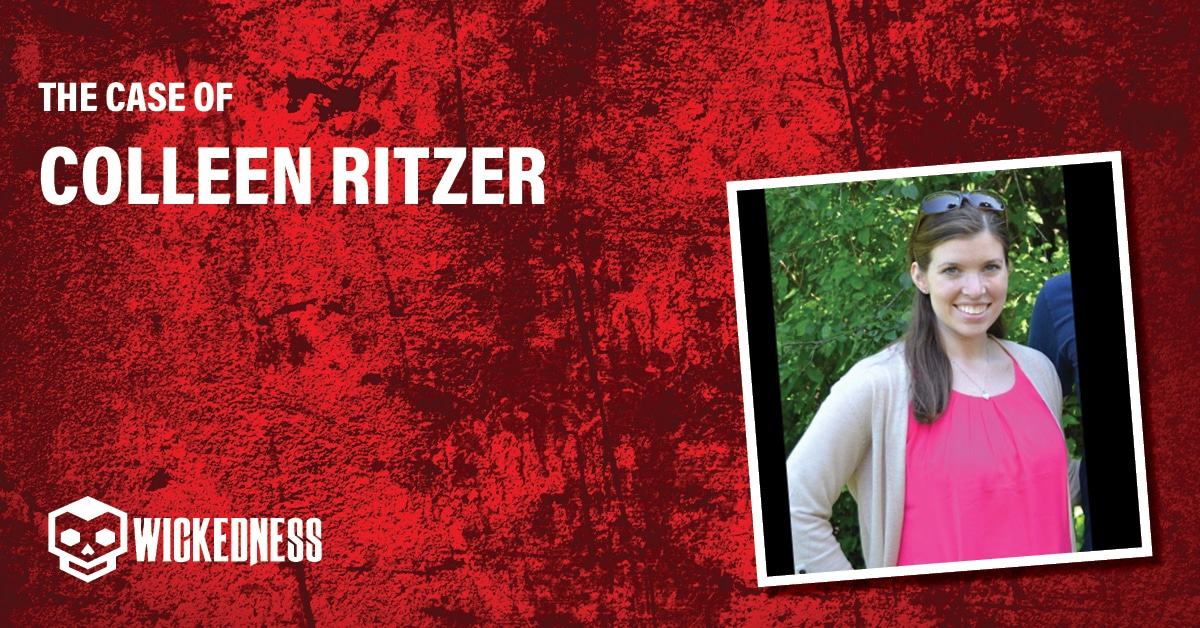 Who was Colleen Ritzer?

Colleen E. Ritzer was born on May 13, 1989 in Lawrence, Massachusetts to Thomas and Peggie Ritzer. Colleen was the oldest child of 3, a brother (Daniel) and sister (Laura). Growing up the oldest of 3 created a passion for family and teaching in Colleen. So after graduating from Salem State College, Colleen Ritzer followed her dream and became a 9th grade Algebra teacher at Danvers High School. She loved being a teacher and quickly became the “popular teacher” at the school. Many of her previous students still discuss how they hated math until they had Ms. Ritzer. She would often even stay late with students to help them with any class they were struggling in, not just hers. Simply put, Colleen Ritzer was a well-loved teacher.

October 22nd, 2013 was a day like any other. Colleen was reviewing test questions with her students for an upcoming math exam. During the class, Colleen had noticed that one of her students, 14 year old Phillip Chism, was doodling instead of reviewing with his classmates. Colleen asked Phillip to stay after school to review for the test with some other students. A student later told investigators that Ms. Ritzer went to speak with Phillip at his desk during the review. That student reported hearing Ms. Ritzer asking Phillip if he was okay and they began discussing issues in his personal life. The student heard Ms. Ritzer say the word, “Tennessee” to Phillip during the conversation and noticed that he seemed to have an immediate negative response to that word. He became visibly angry and the student reported that Ms. Ritzer could see that Philip was upset so she changed the subject and eventually, walked away to help another student and to give Phillip space. Nearing the end of the study hour, the kids began trickling out of school for the day and onto their afternoon sports and fine arts activities.

A Trip To The Restroom

With classes over, Colleen takes a break to the restroom. Surveillance video placed in the school hallways captures Colleen Ritzer walking down the hall and entering the bathroom. Phillip is seen on that same footage within seconds. He has his hood pulled over his head and is seen putting on gloves and following Colleen into the bathroom. Colleen is never seen on the video footage again.

Phillip follows Colleen into the restroom, pulls out a box cutter and slits her throat, then begins beating, stabbing and strangling Colleen Ritzer for the next ten minutes. The school security video then shows Chism exiting the bathroom. One minute after he exits, the video shows another student open the door to the bathroom and immediately shut it. That student later reported to investigators that she immediately shut the door because it appeared that someone was in there changing clothes and she did not want to invade their privacy.

Phillip Returns To The Bathroom Twice

Phillip returns to the bathroom 10 minutes later in different clothing and pulling a green recycling bin on wheels behind him. At 3:22pm, the high school’s security video captures Philip walking out of the bathroom with the recycling bin in tow and wearing a black ski mask. He then quickly pulls off the mask when he sees another student. Video then shows Phillip leave the building and go outside with the recycling bin. He passes several adults as he pulls the bin which seemingly appears like he is headed to the dumpster area but instead he keeps going and disappears from the security footage area. 30 minutes later, Phillip is seen returning to the school in new clothes, proceeds into Ms. Ritzer’s class to gather her belongings, to his locker to grab his backpack and then makes a last stop at the bathroom where he had just killed his own teacher. He is then seen on footage leaving the school grounds for the final time.

Phillip And Colleen Ritzer Are Missing

When Phillip doesn’t return home at his usual time, his mother starts making calls looking for her son. Phillip was supposed to report to sports practice after study hour but coaches informed his mother that he was not present. Phillip’s mom then called police to report her son missing. Within a few hours of Philip being reported missing, the police received a call from Colleen’s parents also reporting her missing. Police began trying to locate Phillip using his cell phone.

The Danvers and surrounding communities came out in droves to search for Phillip and Colleen. Shortly after midnight, a tip came in over the phone. The caller reported seeing a young man walking along the highway. Police immediately followed up on the tip. That young man walking was Phillip Chism. When the police officer searched Phillip, they found a bloodstained box cutter in his pocket with blood on it. When they asked him where the blood came from, Phillip responded, “the girl”. Police also found Ritzer’s credit card and a pair of her underwear on Phillip. He originally told them that he found the items coincidentally, then later changed his story to say he took the items from her car. Police had also pinged Phillip’s location using his cell phone and later reported that he went to Wendy’s fast food restaurant following the murder, where he used Colleen’s credit card to pay for his meal. Location services then showed that he went and watched a movie at the local Hollywood Hits movie theater, again using Colleen’s credit card to purchase that movie ticket.

The Search For Colleen

Hours later, searchers began combing the school and the surrounding area and eventually find Colleen’s body under a large pile of leaves. She was naked from the waist down and her body had been “sexually staged”. It was later reported that she had been sexually assaulted with a tree branch and it was still inside her vaginal area at the time of discovery. A chilling note written by Chism was also found beside her. The handwritten note read, “I hate you all”. Autopsy results report the cause of death as strangulation and stabbing.

Who Is Phillip Chism And Why Did He Murder Colleen Ritzer?

Phillip Chism, a 14 year old student at Danvers High School was said to be a star soccer player with many friends. He had recently moved with his mother to Danvers, Massachusetts from Tennessee. It was reported that his parents were in the middle of a high conflict divorce and he was struggling mentally. It was also later reported that Phillip had allegedly suffered with mental health issues from the age of 10 and had a family history of mental illness.

Did Phillip fly into a rage?

“The indictments … detail horrific and unspeakable acts,” District Attorney Jonathan Blodgett said in a statement. Chism’s defense attorney didn’t argue that fact but did argue that Philip’s mental health issues – possible Schizophrenia diagnosis and Psychosis, were the reason for the horrific circumstances and unspeakable act, hoping for a lesser charge of guilty by insanity. Phillip’s attorney argued that the word “Tennessee” was a trigger for Phillip which sent him into a rage therefore murdering Colleen. Chism’s psychiatrist, Dr. Richard Dudley Jr., who was supposed to be the defense’s #1 witness, told jurors Chism referred to Ritzer’s brutal sexual assault and killing as “difficulties” her family is working through. Dudley, also claimed that Chism, now 16, has been under the command of an imaginary male voice since the age of 10 and claimed that Phillip has expressed remorse for Ritzer’s death.“There was much more of a sense of having had an illness that had not been treated, and if he had been treated would not have caused the difficulties that he caused to this family,” said Dudley. Assistant Essex District Attorney Kate MacDougall angrily retorted, “The ‘difficulties’ that he caused?” Dudley quickly countered, “I think it’s pretty hard for him to talk about this.” The psychiatrist also said both Chism and his mom deny he was ever physically or sexually abused while growing up in Tennessee, even though Dudley suspects he suffered some sort of childhood trauma, he said the teen has repeatedly told him he “can’t,” “won’t,” or has been told “not to talk about it.” “It’s my opinion that he has been experiencing a psychotic process” that “ebbs and flows” in terms of its frequency and intensity, Dudley said of Chism, adding, “It’s not like he can’t be lucid and psychotic at the same time.” The prosecution didn’t buy any of it and the defense’s strategy of saying that Phillip “just snapped” failed horribly when the attorney for Colleen Ritzer showed proof that Phillip had premeditated this murder due to the fact that he brought gloves, a box cutter and a ski mask with him to school that day for a planned attack.

Phillip Chism is Sentenced and Convicted

In December of 2015, Phillip Chism, now 17, was found guilty and will serve life in prison with the possibility of parole in 25 years for the murder charge. However, he also received 40 years concurrent sentences for the rape and robbery charges. These charges and sentencing will make sure that Phillip Chism doesn’t have a chance at freedom again until he is in his 50s. Phillip remained in the juvenile facility until he turned 18 and was then moved to the adult prison. During his time at the juvenile facility, he severely beat and strangled a female officer almost killing her before another officer arrived and stoped the attack.

Why Didn’t Phillip Get A Harsher Sentence?

If Chism had committed this crime as an adult and was convicted of first degree murder, he could have received capital punishment or life in prison without the possibility of parole. Following rulings in 2013 by the United States Supreme Court and the Supreme Judicial Court of Massachusetts, Chism could not receive a life sentence without the possibility of parole since the crime was committed while he was a juvenile.

Colleen’s family called the sentencing unacceptable and blamed the Massachusetts’s Supreme Judicial Court, which ruled in December of 2013 that juveniles could not be sentenced to life in prison without the possibility of parole. “This guilty verdict, while the beginning of justice for Colleen Ritzer, is certainly no cause for celebration as there can never be true justice for the crime committed,” said Thomas Ritzer, her father. “There remains a tremendous absence in our lives, one that sadly can never be replaced.”

After sentencing, Ritzer’s family told the entire courtroom how Colleen’s death had devastated the rest of their lives.

“I will never get to walk Colleen down the aisle at her wedding,” said Colleen’s father, Tom Ritzer. “I will never giver her away at the altar, or have that father-daughter dance … And I lost my beautiful little girl.”

Many family supporters wore pink, prompting Peggie Ritzer to say that “the sea of pink brings us great comfort, but also brings great pain because she is not here.”

Brother Daniel Ritzer said, “She was the greatest sister a kid could ask for.

“I wake up in the morning sad,” he said. “You do not know pain until you are forced to watch someone you love be lowered into the ground.”

Colleen’s family and friends miss her dearly and never wanted Colleen to be forgotten so they organized an annual 5K called Step Up for Colleen. The money raised goes directly to the Colleen E. Ritzer Memorial Scholarship fund to help others become teachers just like Colleen. You can find out more information and get involved by visiting colleenritzer.org.

How did Colleen Ritzer die?