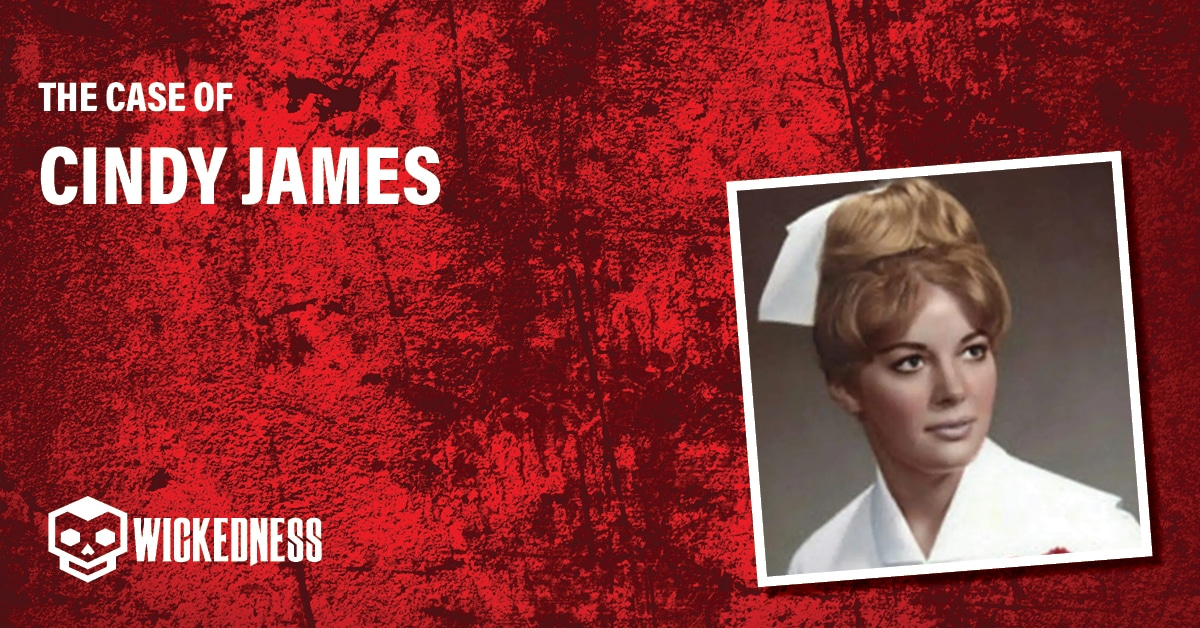 Who was Cindy James?

Cynthia Elizabeth Hack James was born in Ontario, Canada in 1944 to Otto and Tillie Hack. She was one of six Children. Cindy was known as a loving persona but wasn’t known as someone who could make real personal connections in her young age, probably due to her moving houses constantly with her family. Cindy grew up to be a very beautiful young lady with her long blond hair and slim body.  There is not a lot of information about her relationship with her pare

In 1966, after graduating high school, Cindy James became a nurse at age 19. She really had the vocation and passion for it. Cindy also started working at a home for children with emotional problems. At the same time, While the canadian nurse was doing great establishing her career, she got married to a man 15 years older than her, Doctor Roy Makepeace. The marriage woulnd’t be supported by Cindy’s family and not because Roy was much older than Cindy but because apparently when Cindy and Roy started their romance, Makepeace was still married to another woman. Cindy’s father, Otto, thought that wasn’t a good man’s doing.

Cindy and Roy remained married for 18 years but on July 1, 1982, they separated. The couple didn’t give much explanation for this, they just said both were good with their decision.

Four months after her divorce, Cindy started having weird phone calls to her home. First they were prank calls as somebody breathing into her phone but not saying anything. These calls would eventually escalate into threatening calls. Somebody was telling Cindy ¨I’m going to kill you¨. That being already bad enough, the calls continued to progress from just on the phone meanness to somebody actually cutting Cindy’s phone wires, tempering with her porch lights, fire settings to her home, letters with threatening messages describing how she would be killed, amongst other things.

Police took Cindy’s reports of mysterious harassment very seriously and put a 24-hour surveillance plan for Cindy. She had a police Patrol outside her home all the time. Sadly for Cindy, police never found anything strange going on while they were there. So would eventually do less and less surveillance. They thought her ex-husband Roy Makepeace could be their suspect. But after interviewing him, Roy told investigators Cindy was a psychotic person with persecutory delusion, always paranoid and with multiple personality disorder.

In January 1983, a friend of Cindy’s, Agnes, dropped by Cindy’s house for a visit and knocked on the door. There was no answer, so she assumed she was taking her bath. As she investigated, she came across Cindy outside, crouched down with a nylon stocking tied tightly around her neck. Cindy said that she had gone out to the garage to get a box and someone had grabbed her from behind. All she saw were the assailant’s white sneakers. When being officially questioned about the incident, police found Cindy being reluctant and frightened to give details. This behaviour added to her ex-husband’s opinions, would make police doubt about Cindy’s stories.

The tragic story of constant harassment Cindy was living under,  took her to move to different houses and even change her name to Cindy James. She also hired a private investigator named Ozzie Kaban. He gave Cindy a two way walkie talkie to communicate because she would claim that her attacker was cutting her phone wires all the time, making it impossible for Cindy to ask for help. On the night of January 30, 1984, Ozzie heard strange sounds coming over the two way radio and went straight to her house. Once there, he found Cindy lying on the floor with a knife driven straight to her hand and a note saying ¨You are dead bitch¨. Cindy was taken to the hospital where she later recalled being attacked and a needle going into her arm. Police never found fingerprints from a suspect; they thought it had all been staged by Cindy.

Path McBride, a police man who seemed to believe Cindy and have particular interest in her case; moved in with her for a while. He thought that by being in her house, there would be no chance for the stalker to escape after his attacks. Nothing happened during his stay. Not one little incident. Once again, this led rest of police to believe Cindy was fabricating all of her stories.

On December 11, 1985, Cindy was found dazed and semiconscious lying in a ditch six miles from her house. She was wearing a man’s work boot and glove, and suffering from hypothermia. Cuts and bruises covered her body. A black nylon stocking had been tied tightly around her neck. A needle mark was found on her arm. Cindy had no memory of what happened.

Since Cindy James was still reporting the attacks but police found no proof of any other suspect, they tested her with a polygraph a couple of times, and both times she failed.

One night in April 1986, Cindy’s neighbours, Agnes and Tom, who had been staying with her to take care of her, woke up in the middle of the night to the basement in flames. When Tom tried to call the police the phone was dead so he went to alert the neighbours. He saw a man right outside the house and asked him to call the fire department. Instead, the man simply ran off down the street. What Tom saw didn’t matter to police and since they found no dust or fingerprints anywhere in the house; they decided it was another incident staged by Cindy.

At some point after the April, 1986 incident, Cindy would be committed to a psychiatric ward under a suicidal tendency diagnose. She stayed in for teen weeks and was released.

In October 1988, Cindy’s ex-husband Roy Makepeace received a bizarre message on his answering machine; the raspy voice said, “Cindy…dead meat…soon.” At the time, Investigators involved in the case this was just another of Cindy’s makings. Since the voice sounded more like a woman trying to sound like a man.

On October 26, Cindy came home from work and was attacked in her carport. She was later found unconscious in her car, nude from the waist down. A nylon stocking was tied around her neck and her arms and legs were hogtied with a second one. Duct tape was found over her mouth. She went into a coma but survived.

Almost seven years after the first threatening call incident, on May 25, 1989, 44-year-old nurse Cindy vanished from the face of the earth. That day she was supposed to do some shopping and collect a paycheck but she never made it back home. Later that same day, the police found Cindy’s car at a local mall. There was blood on the driver’s side door, her groceries were still in the car, and items from her wallet were under the car. No traces of Cindy whatsoever.

Two weeks later, her body was found at the abandoned house, about one kilometer from the local mall.

It looked like Cindy had been brutally murdered. Her hands and feet were bound together behind her back. A black nylon stocking was tied tightly around her neck showing she had been clearly strangled. She also had an injection mark in her arm but no needles were found near the body. Yet, an autopsy revealed that she died from an overdose of morphine.

Police concluded that somehow, Cindy had committed suicide. They assured that she had injected herself with morphine somewhere else and had wandered to the abandoned house, where she had strangled and tied herself and had eventually died.

The case became a Coroner’s inquest; Coroners are independent judicial officers who investigate deaths reported to them. The inquest lasted three long months and finally it was determined that Cindy James’ death wasn’t a suicide or a murder, it was an ¨Unknown event¨.

What is a ¨Coroner’s inquest¨?

An inquest is an inquiry into the circumstances surrounding a death.  The purpose of the inquest is to find out who the deceased person was and how, when and where they died and to provide the details needed for their death to be registered. It is not a trial.