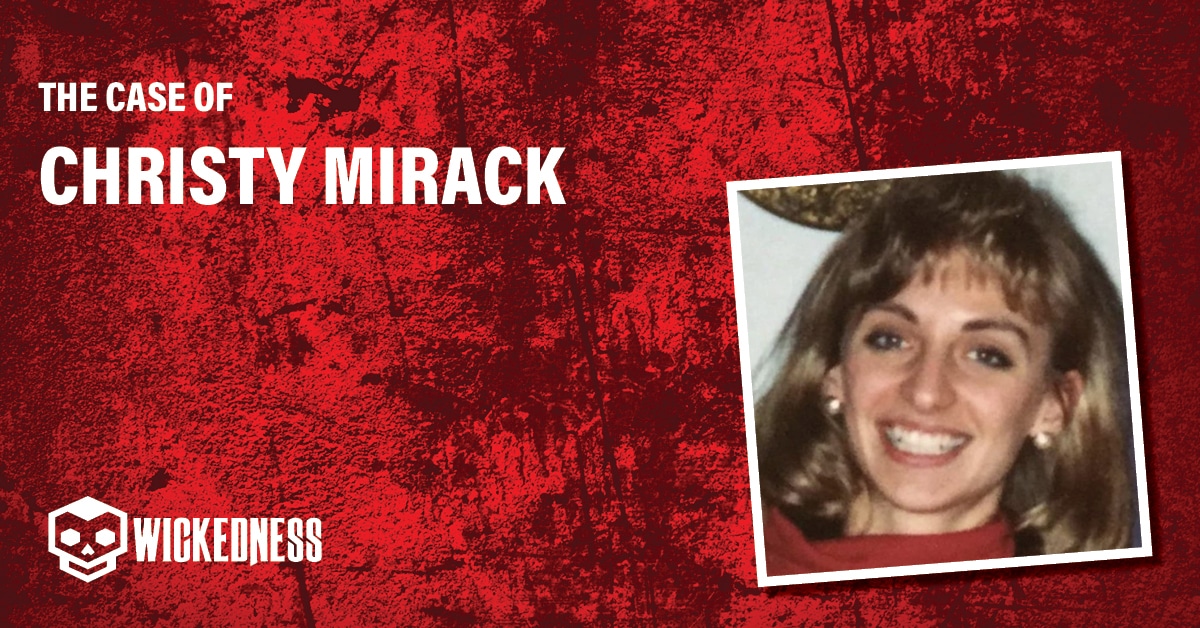 25-year-old school teacher Christy Mirack had recently moved to Lancaster County in Pennsylvania for a new job. Christy’s childhood dream was to be a teacher. She had an incredible passion for education, and her students loved her. She looked forward to teaching her class every day.

Christy Mirack had a routine that she followed almost every morning. When she didn’t show up for work, her boss, the principal of Rohrerstown Elementary School, Harry Goodman, was admittedly worried. He tried calling her repeatedly, but she did not answer, so he drove to her house to check on her. What he found would torment him for years to come.

Harry pulled up to Christy’s apartment and discovered her car parked outside and the front door ajar. Inside he found Christy’s body lying on the living room floor. She had been brutally beaten. Her face and neck took most of the damage; the autopsy revealed her jaw had been broken. Harry ran next door to call 911 for help.

The police arrived shortly after and pronounced Christy Mirack dead. They noticed that she had her coat and gloves on and assumed she was on her way out when she was attacked. Her underwear had been taken off, and her bra had been pushed up; she had been raped. They also located a cutting board near her body, which police believed was the weapon used. After the sexual assault and savage attack, the killer used her own sweater to strangle her. DNA samples were obtained from the scene, semen was found on Christy’s body, and drops of blood were on the floor, but there were no matches in the database.

The police tried to pursue different leads, but the lack of evidence left few options. Due to the methodology of the attack, any men who knew Christy Mirack were quickly ruled out. Lancaster County Detectives interviewed neighbors and received information from witnesses in the area at the time of the murder.

Some said they had seen a white car sitting across the street from her apartment. One woman taking a walk near Christy’s apartment complex that morning said she had seen a man heading towards her apartment and gave the police a detailed description. The police searched for the vehicle and the person based on the information received, but the case remained unresolved for 26 years due to a lack of evidence and new leads.

In 2015, Craig Stedman, the District Attorney of Lancaster County, decided to reopen the case for another opportunity to reexamine the evidence. He believed that a fresh look would give them some new insight. A few years later, law enforcement tried something different. They hoped the latest advancements in DNA technology would allow them to determine the killer’s genetic profile and bring them one step closer to solving the case.

Investigators learned that the killer was a mix of Northern European and Latin American descent and created a sketch of what the killer might look like using the genetic information. The drawing didn’t produce any viable suspects. That’s when police decided to use a public genetic genealogy database that collected voluntarily given samples of DNA. The same technology had been used to catch Joseph James DeAngelo, the Golden State Killer.

After uploading the DNA evidence found at the murder scene to the website, they found a partial match. With a place to start, law enforcement then went back through the family. The new information pointed authorities in the direction of a local, popular DJ, Raymond Charles Rowe, known professionally as “DJ Freez.” After the police collected a DNA sample from a water bottle thrown away by Rowe, they obtained the evidence they needed. Raymond Rowe was a match to the DNA found at the crime scene.

Despite this, Police were concerned they had the wrong suspect. Rowe had lived in Lancaster for many years; he was well known, successful, a husband and father, and went to church every Sunday. There was no evidence that he knew Christy Mirack. However, Lancaster County Detectives discovered that he worked near her apartment complex around the time of the murder, and he lived just miles from Christy’s place.

He would have passed by her home driving to and from work. Also, the vehicle he owned at that time matched the description witnesses gave of the car outside Christy’s home the morning she was killed. No other connections between Rowe and Christy Mirack were found, but based on the DNA match, he was arrested in 2018.

Raymond Rowe admitted to killing Christy Mirack, and the Lancaster County Court charged him with rape and first-degree murder. In exchange for him pleading guilty, Prosecutors did not seek the death penalty. He was sentenced to life in prison without the possibility of parole.

The remorselessness of the murder was horrifying. After killing Christy Mirack, Rowe was his usual self and returned to his daily life as if nothing had happened. His family had no idea what he had done until he was arrested. Despite what he had done, Rowe lived a happy life. He continued his deejaying career and became quite successful, performing for celebrities like Paris Hilton. No one suspected him of this brutal crime.

In 2021 Raymond Rowe tried to withdraw his guilty plea and requested a new trial, claiming he was innocent. Rowe says he pleaded guilty to a crime he didn’t commit because his attorney told him he didn’t have a reasonable defense. Rowe said he was continuously urged to take the plea bargain and keep the death penalty off the table, so he would still be able to see his family.

He also said he was kept isolated, sometimes with no clothes and only a blanket. It was a combination of the conditions in Lancaster County Prison and pressure from his defense attorney that eventually wore him down. Rowe now claims he had consensual sex with Christy Mirack, and someone else killed her afterward. He also asked that DNA testing be performed on the wooden cutting board found next to Mirack’s body, the presumed murder weapon; the board was not tested previously, and he claims it will show someone else’s DNA if tested.

What happened to Christy Mirack?

She was beaten, raped, and then strangled to death.

Where is Raymond Rowe now?

Currently, he’s serving a life sentence without the possibility of parole.

He is married and has a daughter with his current wife.