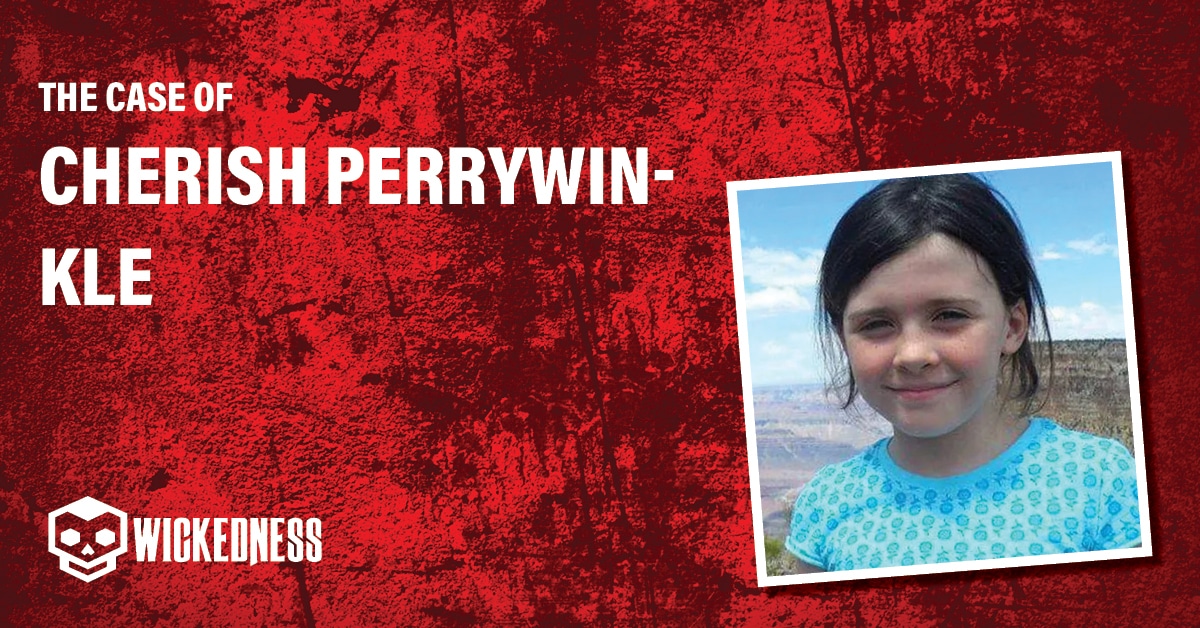 Cherish Perrywinkle, raped and brutally murdered by Donald Smith. The same man who had just offered to buy the little girl some new clothes, in the presence of her mother Rayne Perrywinkle.

Rayne Perrywinkle was originally from Australia. She moved to the U.S. and met Billy Jerreau. The pair had Cherish Perrywinkle together on December 24th, 2004. Their relationship was anything but smooth sailing and Billy and Rayne had been involved in an ugly custody battle before and after Cherish’s murder. In the end, Rayne was given full custody of her daughters which also included Cherish’s younger sisters Destiny and Naveah. But that didn’t mean Rayne was necessarily the best option. The case’s custody evaluator, Robert Wood, had expressed doubt to the court about Rayne’s ability to adequately care for the children and his concerns about the unstable environment that the girls would be living in with Neveah’s father, Aharon Pearson.

On June 21st, 2013, Rayne took 8-year-old Cherish and her sisters to a Dollar General store in Jacksonville, Florida. Donald Smith happened to hear Rayne telling either a teller or an employee that she couldn’t afford to purchase a dress that she had picked out for Cherish. Cherish was leaving the following day, June 22nd, to fly across the country to visit her biological father. Donald then approached Rayne and offered to buy some clothes for them at a nearby Walmart because he had a $150 gift card that he and his wife hadn’t used. He explained that his wife had the gift card and she would come and meet them. After some time passed and his wife hadn’t arrived at the Dollar General, Donald offered to drive the group to the Walmart. Rayne was initially reluctant to accept his offer but she said he got “snappy” and offered to show her his driver’s license which made her feel “foolish”.

Rayne and the girls then got into Donald’s white van and he drove them to the Walmart. They ended up shopping for hours, waiting for Donald’s wife to arrive. Rayne didn’t know it at the time but not only did Donald’s wife not exist, he had been released from prison 21 days earlier on a child abuse charge. Donald James Smith had also been on the public sex offenders registry since 1993. It started to get late and Donald’s wife still hadn’t arrived. The girls were all hungry and Donald offered to buy them cheeseburgers at a McDonalds inside the Walmart. Rayne later said she felt okay letting Cherish go with him since they weren’t leaving the store and it was a public place. Instead, at 10:44 pm, Donald Smith walked out of the store with Cherish following closely behind. She was never seen alive again.

Time continued to pass and Cherish and Donald still weren’t back. Rayne then heard the store closing announcement and she went to go and look for her daughter and Donald. They were nowhere to be seen. Rayne got more and more worried and then she borrowed the phone of a Walmart employee and dialled 911 at 11:18 pm. This is a quote from that frantic call: “I’m hoping he’s not raping her right now… We’ve been here probably two hours, and she didn’t show up. I have this cart full of clothes that he said he was going to pay for. I had a bad feeling. I feel like pinching myself because this is too good to be true. I got to the checkout, and he’s not here. My girls need clothes so bad. That’s why I let him do it.”

Police were soon on the scene and they initially doubted Rayne’s story and wondered whether this was a genuine abduction case. Regardless, they followed up on what Rayne had said and the Jacksonville Sheriff’s Office broadcasted their first BOLO (be on the lookout) for the young girl and Donald’s white van. Officers also viewed surveillance footage from the Walmart and were then able to verify that Cherish had in fact left with Donald Smith. An Amber Alert was issued at 4:21 am on June 22nd.

At 8:34 am, a citizen had seen a suspicious white van that matched the one that had been broadcast on TV as belonging to Donald Smith. It was located at  the Highlands Baptist Church on Rutgers Road. Donald Smith’s van was spotted on the I-95 just before 9 am and he was pulled over and taken into custody shortly after. Cherish was not in his van. The officer that patted him down noted that Donald was completely wet from the waist down. His explanation for this was that he had been doing drugs all night and that made him sweat excessively. The officer who patted him down immediately exclaimed, “she’s in the water.” Cherish’s body was found by the K9 team at 9:20 am. She was submerged in water in a grassy marsh behind the church on Rutgers Road.

Cherish’s autopsy revealed that she had been raped prior to her murder and had suffered blunt force trauma to the head. Her cause of death was strangulation which appeared to have been done with a t-shirt. She had been strangled with such force that her eyes, gums, and noses all began to bleed.

Cherish’s murder became one of the highest profile cases in Jacksonville’s history. The trial took place in 2018 after some objections from Donald Smith’s legal team. In the end, Donald Smith was found guilty of the kidnapping, rape, and murder of Cherish Perrywinkle. The evidence had been nothing short of overwhelming. The jury had taken only 19 minutes to deliberate and all 12 jurors recommended to death penalty. In his May sentencing, a judge imposed the death penalty. Donald Smith’s legal team appealed this decision but all 5 reason given in this appeal were discounted on April 22nd, 2021.

Rayne Perrywinkle was unable to keep custody of her daughters after Cherish’s murder and in November 2016, Destiny and Naveah were adopted by their aunt in Australia after they were put up for adoption.

A: Cherish was abducted and murdered by child predator Donald Smith.

Q: What happened to Donald Smith?

A: Donald Smith was convinced of murdering Cherish Perrywinkle after he abducted the young girl from a Walmart in Jacksonville, Florida. He was sentenced to death but his attorney had appealed this verdict.

Q: What Walmart was Cherish Perrywinkle kidnapped from?

A: Cherish was kidnapped from a Jacksonville Walmart on Lem Turner Road.