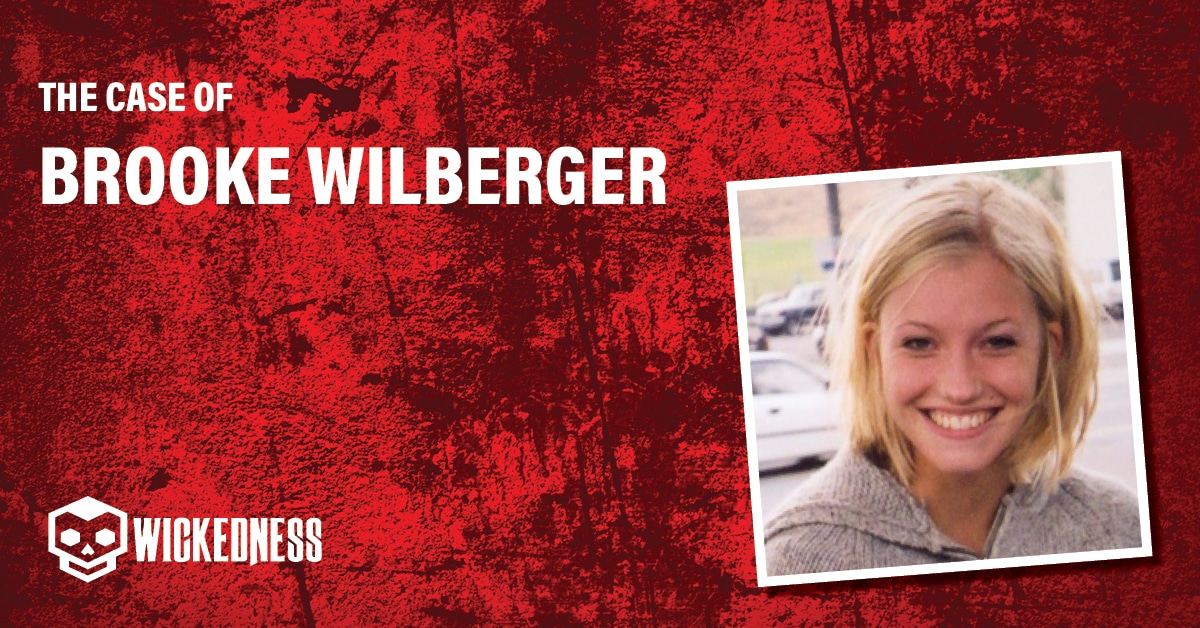 Brooke Carol Wilberger was born on February 20, 1985 in Fresno, California. Her parents were Greg Wilberger and Cammy Wilberger. Brooke had five siblings, her sisters Shannon, Stephanie and Jessica; and her two brothers Spencer and Rice. Her mother was a teacher and her father was a process engineer. As a Mormont family, they moved to Oregon, where Brooke was still a kid, she would grow up to be a smart, athletic, self-confident beautiful woman. She loved to snowboard, play soccer, play the piano and was a part of the drama club at her school, when she was a teenager. She attended Brigham Young University, in Utah, together with her high school sweetheart, Justin Blake, who was a part of the Mormon community too. After the first year of university, Brooke’s boyfriend decided to go on missionary work to Venezuela for the summer. Brooke decided it would be best to go back home in Oregon. So for the summer of 2004, Brooke thought it was a good idea to work part time for her sister Stephanie, who was the manager of Oak Park apartments complex together with her husband, in Corvallis, Oregon.

Vanished from the face of the earth

May 24, 2004 was a normal day just like any other. 19-year-old Brooke Wilberger woke up early to go to work, she had a 45 minutes’ drive ahead. Before leaving, Brooke smiled at her younger sister Jessica, she said ¨I love you¨ and left. When arriving to the Oak Park apartments complex, Brooke said hello to her sister Stephanie and her kids and she was given her list of chores. The first task was to go around the complex and clean the land posts glass, so Brooke filled a bucket with water, got some rags and was ready to work. Stephanie had left the apartment in the morning to take one of the kids to pre-school. When she returned she didn’t see Brooke initially. Nothing to be concerned about though. But later, around 1:00pm when Brooke was supposed to go to Stephanie’s for lunch and didn’t show up; Stephanie started feeling confused. About an hour later, without any news from her sister, Stephanie grabbed her kids and decided to go on a search for Brooke Wilberger around the Complex. When Stephanie was near the lamp post, where Brooke should have been, she found nothing but a bucket lying on the ground. As she got closer to the it, she noticed a set of blue sandals and she recognized them as the ones Brooke was wearing that morning. One of them was broken and there were signs of what seemed to be a struggle.

Inside of Stephanie’s apartment she found Brooke’s cell phone, wallet and purse. Her car was still in the parking lot.  It didn’t make any sense for Brooke to leave without any of her personal belongings, she just wouldn’t do that. At 3:07pm, Stephanie’s husband Zack, called 911. Investigators from the Oregon State police arrived and started questioning the neighbours. All the residents of the apartment buildings said they hadn’t seen Brooke at all. But one of them claimed that shortly after 10:30am he heard somebody screaming.

Corvallis police investigators started making questions to Brooke’s family, they wanted to interview Brooke’s boyfriend Justin but when they learned he wasn’t in the country, it didn’t make any sense to do it. So they turned to the last person who saw Brooke that day; her sister Stephanie. Police asked her if they got along well, if she would ever want to harm her little sister, etc. Of course nothing came out of that. Stephanie loved her sister.

Brooke Carole Wilberger’s family gathered volunteers the same afternoon of the disappearance; they had around a hundred people doing a massive search for Brooke everywhere. They also printed hundreds of ¨Missing person¨ flyers with Brooke’s information and posted them all over Oregon. The case became popular in the media as well.  But nothing was bringing any information that lead to Brooke.

About a week after Brooke went missing, they got a tip from a woman saying that a weird man driving a green van had approached her to ask her for directions but something felt off about him, so she left. That happened just a block away from where Brooke was taken. Unfortunately, Police didn’t have a license plate to look for said car, so it led nowhere since there were about 10000 green vans in the area.

A weird tangent side story: 700 panties

Another tactic Oregon State police had was to look for the registered sexual offenders in the area. To their surprise, there were around 2000 known offenders! Eventually, this tactic led to a man named Sung Koo Kim, who was caught stealing underwear in a laundry room very close to the apartment complex Brooke Wilberger was taken from. Corvallis police ended up getting a search warrant for Sung Koo Kim apartment; when doing so, they found very disturbing information.  The man had thousands of pairs of stolen women’s underwear from girls on a college campus nearby, he got them all tagged and labeled. Police also found a photo lineup of child pornography and information about a blond, blue-eyed student he had been stalking at the time. Everything was creepy about this man but police didn’t find anything related to Brooke inside his house, he even had an alibi that showed he had been 70 miles away on the morning of May 24. 30 year-old Sun Koo Kim was charged and sentenced to 11 years in prison for theft and possession of child pornography. Once again, the murder investigation was left with nothing.

When finally confessing to Brooke Wilberger’s murder; Joel Courney told what happened on the morning of May 24, 2004.

Courtney approached Brooke Wilberger telling her he needed help with directions because he had a package to deliver. When Brooke got closer to his vehicle he forced her inside his van at knifepoint. He then drove west on his way to the foothills of Oregon’s coast range mountains. He bound her with duct tape and drove deep into the woods, where he kept her alive for 24 hours.  Next day, on May 25, he sexually assaulted her. Brooke fought back as much as she could. Joel Courtney told the police he knew he had to kill her after the sexual assault because ¨her demeanor had changed¨. So he proceeded to bludgeon her skull with a piece of wood. He packed her body with soil and other materials and buried Brooke in the woods.

Joel Courney only admitted to the crime after getting a plea agreement from the prosecution, he was going to take life in prison instead of a death sentence.

Joel was born in June 2, 1966. He grew up in the Portland area. He later moved to Alaska, Florida and New Mexico, usually working as a fisherman, janitor or a mechanic.

When he was 11 years old, he started using drugs. When he was 17, he tried to rape his sister while she was asleep, she had to hit him over with a clock to stop him. Later a cousin said he tried to rape her in four different occasions during her teens. When Joe was 19, in 1986, he was charged with first degree attentive rape for trying to rape a woman in the Washington County. He served time in jail.

Joel P. Courtney got married to Rosy Courtney and settled in Rio Rancho, New Mexico. He was a violent husband and a terrorizing father, always angry and drinking too much alcohol. Joel Courtney also used crack cocaine.  Actually, around May 2004, same month Brooke Wilberger’s murder took place, Rosy Courtney had filed a restraining order against Joel.

On November 30, 2004, in New Mexico, a young woman was seen running in the streets with what seemed to be just an unzipped jacket. When people tried to help her, she told them she had been abducted by a man driving a red Honda Civic, the man had threaten her with a knife and forced her inside his car. The man undressed her and gagged her with her own underwear; his intentions were to rape her. Fortunately for her, the man left the vehicle for a couple of minutes and she was able to escape. The man’s name was Joel Patrick Courtney.  Law enforcement personnel arrested Courtney and called Oregon State police to tell them about him as a potential suspect for Brooke’s case.

Law enforcement started their investigation on Joel Courtney and they found interesting information. First, when going over Courtney’s steps on the day of Brooke’s abduction, he was supposed to appear in court to face a drunken-driving charge; the records show Courtney called the court to say he was on his way but he never showed up. Second; when they asked the woman who had been approached by a weird man in a green van on the same morning Brooke was taken, if she could identify Courtney as being that man, she recognized Joel. He was now the main suspect.

On April 2, 2005, police was able to find the green van Joel Courtney was driving on May 24, 2004. They needed to take a good look at it. There had to be clues there, some evidence that linked Courtney to Brooke. After three days of taking the van apart, a strand of blond hair was found in the car. It was sent to testing. On May 24, 2005, results were back and they showed the hair belonged to Brooke Wilberger. If everything turned out alright with Courney’s confession, he would be facing a potential Death penalty.

In April, 2008 Joel Courtney was officially extradited to Oregon. But just in September 2009, after being offered a plea deal, he would finally admit to murdering the 19-year-old Brigham Young University Student. He then told the police about the body exact location. An abandoned logging road off Highway 20, about 12 miles west from Corvallis. Near Blodgett, Oregon.

Joel P. Courtney was charged with First-degree murder and first- degree kidnapping of Brooke Wilberger, attempted murder and attempted kidnapping for the two students he tried to pick up before he got Brooke on May 24, 2004.

Joel P. Courtney made a plea deal in exchange for giving Brooke’s body location, so he wouldn’t be given a death sentence. Instead, he got life sentence without the possibility of parole.

Where was Brooke Wilberger’s body found?

Brooke Wilberger’s remains were found on an abandoned logging road off Highway 20 about 12 miles west of Corvallis.

What was Brooke wearing the day she disappeared?