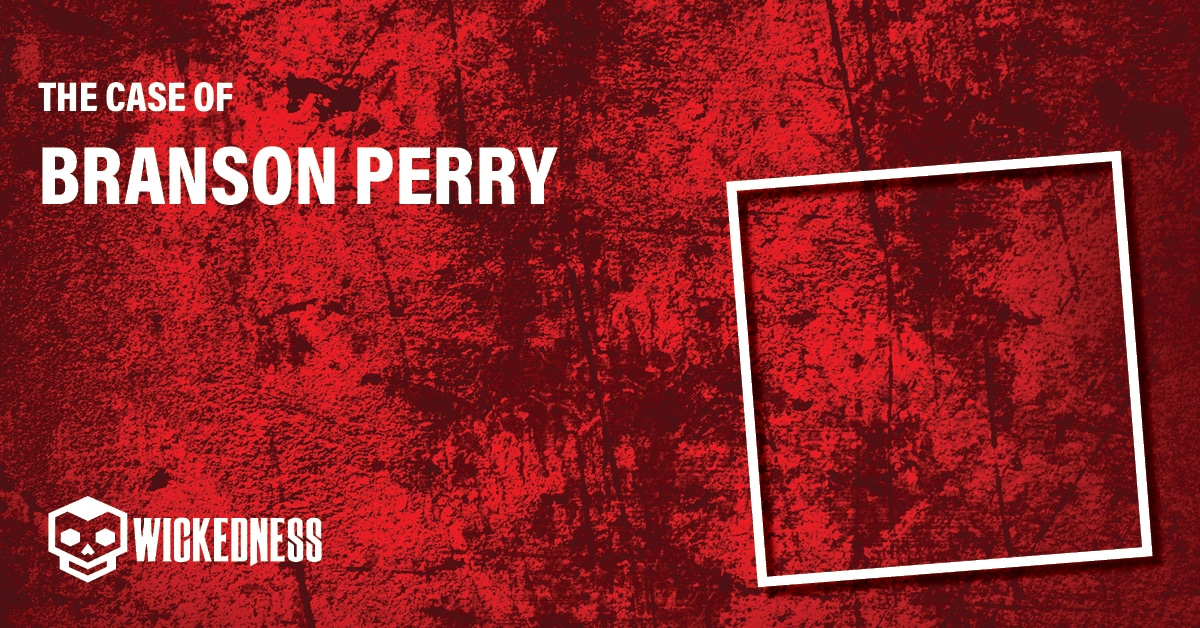 Who was Branson Perry?

In 2001, 20-year-old Branson Perry is living in Skidmore, Missouri with his father, Bob Perry. Branson’s parents had recently divorced, and Branson chose to remain in the family home with his father, while his mother Rebecca “Becky” Klino, and younger brother Jim Klino, moved to a nearby town. All of the family remained close and on good terms. Branson had graduated Nodaway-Holt High School in 1999, and for a short time worked as a roofer. After he lost that job, Branson worked for a traveling petting zoo.

Though Branson had a heart condition known as tachycardia, which made his heart race, he also had a black belt in hapkido. According to some close friends of his, Branson had recently been involved with and using drugs.

On Wednesday, April 11 of 2001, Branson’s father had been in the hospital for a few days but was expected to come home on Friday, April 13th. So Branson had asked a friend, Jena, to come over and help him clean.

When she arrives that morning, everything appears normal. Jena sees two men on the property working on Bob’s car, which had needed its broken alternator replaced. She goes in and she and Branson begin a deep clean of the house.

The first thing of note that Jena describes happens at around 2 pm, when she witnesses Branson grab something from one of the cabinets and then walk outside. A few moments later, Branson returns inside and brushes off Jena’s questions about what he had been doing. Later, Jena takes a shower and when she gets out, she and goes downstairs and sees a man looking through the kitchen cabinets.

The man was one of the two men who had been on the property working on Bob’s car. When she asked the man what he was looking for, Jena said that he became flustered and quickly left the home.

A short time later, at around 3 pm, Jena tells police that she had been in Branson’s room, when she heard the screen door open and close. She looks through the window and sees Branson walking towards the shed. She yells out to him and asks what he’s doing, and he responds that he’s taking a pair of jumper cables to the shed and then needs to go out, but would be right back. A short while later, Jena hears the mechanics pack up and leave.

This was the last time anyone would ever see or hear from Branson Kayne Perry.

Family Checks in on Branson, but He is Nowhere to Be Found

On April 12th, Branson Perry’s grandmother, Bobbie Jo Stinnett, stops at the house to check on Branson. She describes the scene as looking as if Branson had recently been there. There’s very loud music playing, all of the doors are unlocked, the lights are on, the windows open, the furnace is on and she finds Branson’s wallet and keys on the table. Assuming Branson was simply away, Bobby Jo turns everything off and shuts the house, and locks all of the doors, except the front.

Days pass, and no one sees or hears anything from Branson. Worry growing, Bobby Jo returns to the house on Saturday, April 14th, and finds that it looks no different than when she left it on April 12th.

Bobby Jo, Becky Klino, and Bob Perry go to Law Enforcement to officially report Branson missing on Monday morning, April 16th, 5 days after the last person had seen or heard from him.

There are two main suspects in the Branson Perry case, neither of which has ever been officially charged.

The first suspect is Branson Perry’s neighbor, Jason Biermann. On April 7th, four days prior to the day Branson disappeared, he went to Biermann’s home. There, he was given an unidentified drug which caused him to act abnormally. Branson stripped off his clothes and danced around the house before shaving his pubic hair and being raped by Biermann.

The following day, now sober and humiliated by what had occurred, Branson confides in his father about what happened. Bob Perry was angry and considered “teaching a lesson” to Biermann for taking advantage of his son, but no altercation occurred.

It is unclear if Biermann was ever identified as a prime suspect or how he responded to the disappearance of Branson.

The Second Suspect: Local Preacher – A Pedophile, Murderer, and Cannibal

The second suspect came to the police’s attention in 2003, when a local 59-year-old presbyterian minister and boy scout leader named John Wayne Rogers was arrested for attempting to perform sex reassignment surgery on a transgender woman. He was charged with first-degree assault and practicing without a medical license, and the police seized his belongings and computer. Along with child pornography, the police found that Rogers has written multiple posts under the username “BuggerButt.”

Under this username, Rogers detailed the horrific rape, murder, and mutilation of several men. In these posts, he claimed that he removed their genitals and cooked and ate them. One particular post described the rape, torture, and murder of a “blonde male hitchhiker from Skidmore, Missouri.” Rogers claimed in the post that he buried the boy somewhere in Ozark.

When questioned by police, Rogers denied knowing Branson or having ever met him. He claimed the post was simply a work of fiction.

However, police find a turtle claw necklace in Roger’s car, which Bob Perry says is one that Branson used to often wear. Though Branson’s mother says it’s not like the one her son had, the police send the necklace off to be tested for DNA. However, it’s never been officially linked to Branson.

John Wayne Rogers was sentenced to 30 years in prison for possession of child pornography, distributing child sex abuse material, and for the mutilations he committed while practicing without a medical license.

The Last One Who Saw Him – A Strange, Lingering Detail

Jena told police that, when she asked Branson what he was doing through the window, Branson replied that he was taking a pair of jumper cables to the shed. After his disappearance is reported, Police check the shed and are unable to find the jumper cables. However, two weeks later, the shed is searched again the jumper cables are mysteriously there, hanging in plain sight. This discrepancy remains unaccounted for, and it is unclear whether this was a police oversight, or if someone took and then later returned the jumper cables.

Q: Has Branson Perry ever been found?

A: No, Branson Perry has never been found and his case remains unsolved.

Q: How old was Branson Perry when he went missing?