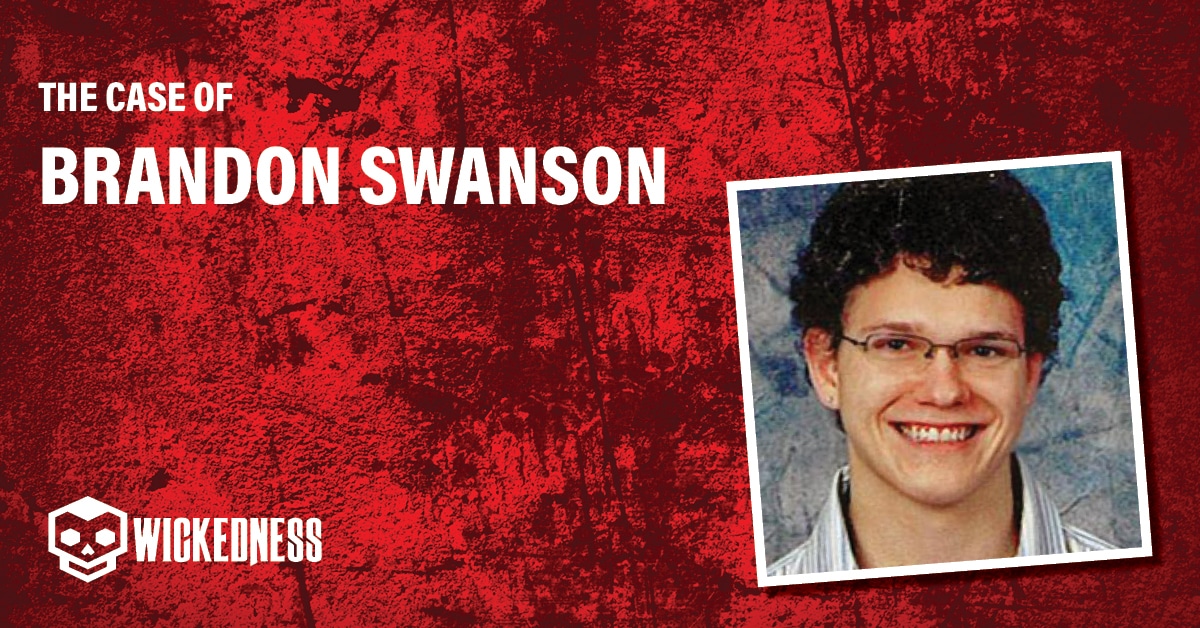 19-Year-Old Brandon Swanson was celebrating the end of the academic year at Minnesota West Community and Technical College. He and his friends were partying at the campus in Canby. Right before midnight, this college student left the party to drive home, which was some 30 miles away. Right before 2 a.m., he called his parents to tell them he drove his car off the road and that he needs them to pick him up. They got into their pickup to find and take him home, but they never saw their son again…

Who Was Brandon Swanson

Brandon Victor Swanson was born on January 30, 1989, in Marshall, southwestern Minnesota. He graduated from Marshall High School in 2007 and studied wind turbines for a year at Minnesota West Community and Technical College in Canby. He lived a normal life with his parents Brian and Annette Swanson and sister Jamine Swanson.

A Night When Brandon Swanson Disappeared

On the evening of May 13, 2008, Brandon Swanson and his friends celebrated the last day of college classes. According to his friends, Brandon drank a shot of whiskey or two but didn’t seem to be intoxicated. Sometimes before midnight, he decided to make a 30-mile drive to his home. That was the last time he was seen alive.

Approximately two hours later, Brandon’s parents were woken up by a phone call. It was Brandon and he needed them to come and pick him up, as he accidentally drove his car off the road and couldn’t get it back on the road. They got into their pickup and started driving toward their son.

While driving, Brandon Swanson’s parents were almost constantly on the line with their son. They agreed to flash the lights on both of their cars so that they can spot each other more easily. However, when Annette and Brian Swanson drove to where they thought their son was waiting for them, they could see no car lights, nor could Brandon see their car light.

Brandon got tired of waiting and told his parents he will walk towards the lights in the distance, whom he believed to be a small town Lynd. He told his parents to go there and wait for him at a local tavern parking lot. They started driving toward Lynd while still talking to their son on the phone. At around 2:30 a.m. they heard Brandon say “Oh, shit!” After that, Brandon no longer talked to his parents. They ended the call and called him numerous times, in hopes of reestablishing their communication, but none of their calls were answered.

At 6:30 that same morning, Brian and Annette Swanson reported their son’s disappearance to the police. However, they didn’t exactly get the help that they expected. At the police station, they were told that it wasn’t unusual for young men Brandon’s age to disappear. One of the officers even told them that Brandon has a “right to be missing”.

Eventually, the police started an official search for Brandon Swanson later that morning. They found no trace of Brandon in or around the town. They requested help from the office of Lyon County sheriff Joel Dahl. The sheriff’s office obtained the phone records from Brandon’s cell phone. The records have shown that Brandon was calling his parents from the vicinity of Taunton, a small town along State Highway 68, 25 miles away from Lynd.

The search quickly moved to that area, and Brandon’s car was found in a ditch off a gravel road, a mile north of Highway 68. Since the car was found in Lincoln County, its sheriff,  Jack Vizecky, joined the investigation as well.

Ground searches were complemented by a flyover team that searched for Brandon from the air, and search dogs were also employed on the ground. A team of bloodhounds picked up a trail of scent that led them to an abandoned farm, and then to the Yellow Medicine River.

Brian Swanson recalled his son mentioning walking by the body of water and passing by some gates. On the night of his disappearance, boats from the state’s Department of Natural Resources were deployed along the river, and gates were installed. The police forces walked by the river banks and searched the surrounding area, but no trace of Brandon Swanson was found.

Soon, the search efforts were discontinued after they showed to be fruitless. Sheriff Vizecky continued to walk by Yellow Medicine River every day for the next 30 days. Brandon’s parents kept their porch light on all night, every night, in hopes of Brandon returning back to them.

The search was continued in the fall of the same year when the fields surrounding Yellow Medicine River were harvested. The search teams with dogs were deployed again and they searched the areas that weren’t searched in the initial search. In the spring next year, more search efforts were made, and this cycle of searches with the help of search dogs was repeated until 2011, with a 122 square-mile search area.

In 2010, a tip line was set by the Minnesota Bureau of Criminal Apprehension, which took over the investigation as the lead agency. By 2015, 90 leads were reported, but Brandon’s fate remains a mystery up until today.

The disappearance of Brandon Swanson awoke the public interest, and many theories began circulating, both among the general public and among the police forces. The first theory suggested that Brandon fell into the river and drowned. However, his parents didn’t believe that he drowned, and even the police dogs followed the scent trail to the other side of the river, implying that Brandon crossed it safely.

The other theory suggests that Brandon fell into the water, managed to get out of the river, and crossed to the other side. Since the temperatures that night were around 40 degrees F, he might’ve suffered from hypothermia and died. This theory has holes too, if Brandon died as described by the theory, why was his body never found, even after the extensive search by cadaver dogs.

There was also a theory that Brandon fell into an unmarked cistern or well, which are quite common in rural areas. That would explain why his body was never found.

The final theory suggests that Brandon is still alive, but decided to disappear intentionally. His parents, Brian and Annette Swanson ruled out this possibility and stated that he would never do something like that. Sheriff Vizecky expressed his suspicions about foul play, “[S]omeone [could have been] in the shadows, and they got him that way,” although he admitted that there was no evidence for that and it was mere speculation.

Brandon Swanson’s parents were shocked by the law enforcement’s initial response to the disappearance of their son. Their concerns for Brandon’s safety and well-being were brushed off quickly, and his disappearance wasn’t taken as seriously as it should’ve been.

They began lobbying for changes in state law that would require an investigation of the case of the adult missing persons report as soon as it was reported, just like it was already done in the case of missing children.

Marty Seifert, minority leader of the state House of Representatives at the time, introduced a bill called Brandon’s Law. This bill would amend the already existing Missing Child Program to change the word “child” to “person”.

A companion bill was introduced to the State Senate by Dennis Frederickson and it passed both houses. It was signed into law by Governor Tim Pawlenty and it took effect in July 2019.

What happened to Brandon Swanson?

At approximately 1:15 a.m., Swanson’s vehicle got stuck in a ditch. He called his parents to come and pick him up, but they couldn’t find him and soon they lost contact. He was never seen or heard again.

What Was The Last Known Location Of Brandon Swanson?

Later that same morning, a review of Brandon Swanson’s cell phone records revealed he was just outside Porter, Minnesota while he was talking to his parents.

Where Did Brandon Swanson Go?

As explained by Minnesota’s Unsolved Cases, it is possible that the teen left the area on his own and is now living under a new identity.