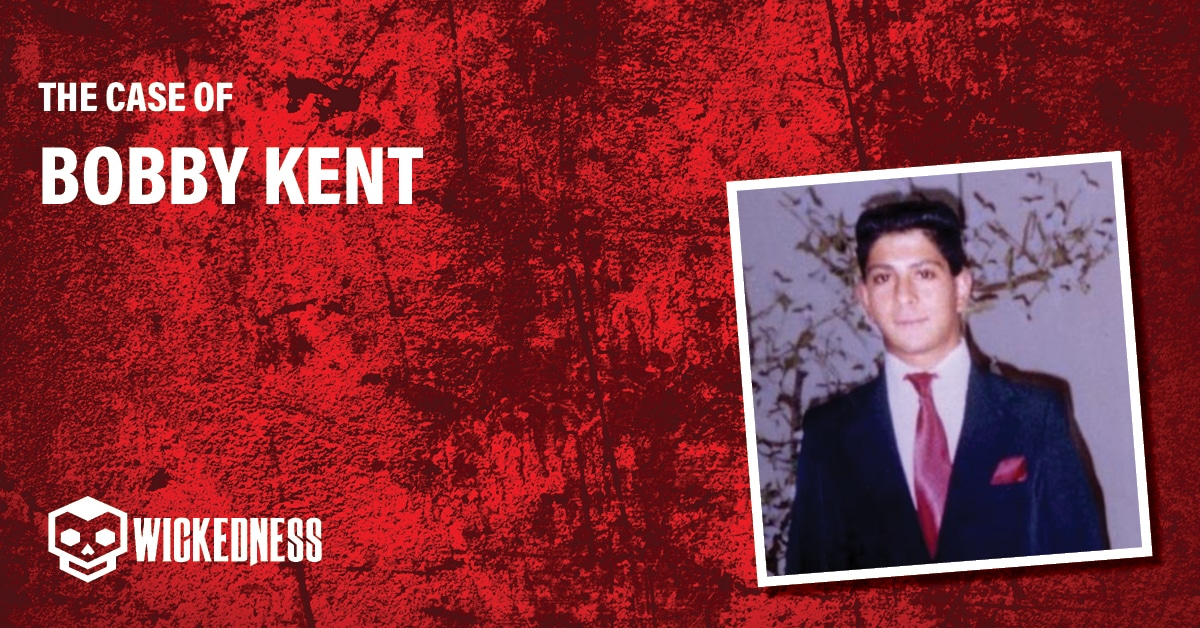 Bobby Kent was the only son of Iranian immigrants Fred Kent and Farah Kent, originally surnamed Khayam. He was born on May 12, 1973, and lived in Florida.

Bobby’s best friend was Marty Puccio. Marty and Bobby had been friends since the third grade. Marty’s parents described the friendship as dysfunctional at best. Marty’s parents informed authorities that he would often come home from hanging out with Bobby covered in bruises. They asked Marty to cut off contact with Bobby or at least limit it, but no other action was taken. Marty’s parents recalled that at one point, the bullying became so bad that Marty begged them to move away from Hollywood so he could escape.

The disappearance of Bobby Kent

On July 14, 1993, 20-year-old Bobby Kent went out with a bunch of his friends. At around midnight, Bobby’s family received a call from Bobby’s best friend, Marty Puccio. The message from Marty says I made it home. I’m calling you as you asked me to. So Fred hearing the message gets up to look for Bobby, but Bobby isn’t home just yet, so he goes back to sleep, thinking he will be home soon. The next morning Fred checks, and Bobby is still not home. He decided to call the police. Fred then went over to Marty’s house, but Marty had gone out on a date with a girl.

Four days later, a decomposed body was found. Inside the pocket of the body was a driver’s license identifying the body as Bobby Kent’s. The scene was very brutal. There were trails of blood everywhere and evidence that Bobby had put up a fight. The cause of the death was several stab wounds. There was a stab wound to the heart, but there were also stab wounds in his neck, stomach, shoulder, and back of his neck. There was also blunt force trauma found on his head, and he had a fractured neck. The stab wounds were also a number of different depths and sizes, indicating more attackers and more murder weapons.

Investigators were able to use the presence of maggots to estimate when Bobby had died. The maggots lead them to believe he had passed four days before his body was found.

In early 1993 Marty was 20 years old, and he had a girlfriend named Lisa Connelly. Lisa Connelly was 18 years old and was pregnant with Marty’s child. Lisa could not stand Bobby. She said he always called her a whale due to her weight and that he treated Marty poorly. Lisa Connelly tries to distract Booby by setting him up with her friend Alice Willis who went by the nickname Ali. Alice Willis was 17 years old and had a baby from another relationship. Ali and Bobby only had a relationship for a few weeks before she called it off. She claimed that Bobby Kent was physically abusive, and she moved back home with her parents to Palm Bay in Florida.

After Lisa had learned that Ali had broken up with Bobby, she decided she had to murder him. Several people had been victimized by Bobby Kent, and Lisa collected a group to help do this.

On July 13, Lisa called Alice Willis and told her if she didn’t move back to be with Bobby Kent, he was going to murder her and smother her baby. It is unknown if Bobby actually said this or if Lisa just made it up to get her back. Ali returns along with two friends, 17-year-old Donald Semenec, her current boyfriend, and 18-year-old Heather Swallers.

On July 13, all 5 of them got together and decided what to do. Lisa and Ali would get their hands on a gun because Lisa said her mum had a gun.

On the night of the 13th of July 1993, all five had arranged to meet up with Bobby just to hang out. Marty, Donald, and Heather. Alice Willis and Lisa lured Bobby to a construction site by saying he would be able to race the mustang and hook up with Lisa. Lisa was then to shoot Bobby while he was distracted by Ali, but she couldn’t do it. She couldn’t pull the trigger. So they end up just hanging out with him.

Lisa contacted Derek Kaufman. He was an alleged 20-year-old hitman. Derek Kaufman, along with Lisa’s cousin Derek Dzvirko met up with the original five. They decided to discuss a new plan.

The next night July 14, everyone gathered at Marty’s house. They told Bobby they wanted to go racing with him again, and he agreed. So at around 11.30 pm, they went to pick Bobby up. They go to another open construction site. Alice Willis, Bobby Kent, Donald Semenec, and Heather Swaller were in one car. Everyone else was in another. The group had two knives, a lead pipe, and a baseball bat. Derek Kaufamn hid in the back of one of the cars so Bobby wouldn’t even know he was there. Donald snuck up behind Bobby and stabbed him in the neck with a knife. Marty ran up to him and shoved a knife into his stomach. Marty continued to stab him and slash his throat. Finally, Derek Kaufman hit him in the head with a baseball bat, which was the wound that delivered the final blow. They rolled Bobby’s body to the marsh’s edge, where they hoped the allegators would consume his corpse and destroy all evidence. The group also threw the weapons into the water.

Lisa Connelly confessed the murder to her mom. Her mom then called Derek Dzvirko’s mom, her sister. Derek Dzvirko was told to turn himself in, which he did. He then led the police to where Bobby was. The whole group was arrested on July 18th. They all gave the same motive to the police, saying Bobby was a bully.

During the trial, the perpetrators gave testimonies of the torment that Bobby had caused them. Marty spoke of the bullying and physical abuse he received from Bobby, and two of the girls stated that he had sexually assaulted them. No evidence was ever presented to support these testimonies.

All 7 of the attackers plead not guilty to the murder of Bobby Kent. What was found astonishing was that not one of the seven perpetrators showed any sign of remorse at trial.

Although the first to stand trial, Marty Puccio was the last to be sentenced. Marty was found guilty of the murder of Bobby Kent. On August 3rd, 1995, he was sentenced to death in the electric chair for first-degree murder. It was determined that he was the person who inflicted the most significant wounds. This sentence was reduced to life with the possibility for parole after 25 years in 1997 after it was argued that his punishment was a lot harsher than the others, and he was no more involved. Marty Puccio is serving his time at the Desoto Annex in Arcadia.

Derek Kaufman was sentenced to life plus 30 years. He is serving his time at the Gulf Correctional Institute in Wewahitchka, where he has incurred nearly 20 infractions, including drug use and disobeying orders.

Donald Semenec was sentenced to life plus 15 years. The murder of Bobby Kent occurred on Donald’s 18th birthday, so he was treated as a legal adult. Along with Derek Kaufman, Donald Semenec is serving his sentence in the Gulf Correctional Institute in Wewahitchka. Also, like Kaufman, he has racked up an impressive count of violations, some 20 of them varying from weapon possession to drug and alcohol use.

Derek Dzvirko was charged with second-degree murder and was sentenced to seven years on May 12, 1995. He was convicted for supplying the baseball bat and helping dispose of the body. However, Derek lied on the witness stand while testifying against others, earning him four extra years. He lied five days after his sentencing about his role. After serving four years, Derek Dzvirko was released on the 1st of October 1999. Derek then moved to Missouri, where he worked as a truck driver.

Lisa Connely, the mastermind of the murder, was sentenced to life plus five years. This sentence was later reduced to nine years on appeal, and she was released on the 3rd of February, 2004. Lisa, who was pregnant at the time of the murder, gave birth to her daughter while she was incarcerated. She is now reported to live in Pennsylvania with her daughter and a younger son. Lisa Connely now keeps a low profile and runs a cleaning business as well as becoming a certified optician.

Alice Willis was charged with second-degree murder and sentenced to 40 years on May 31, 1995. That sentence was later reduced on appeal to 17 years for the murder charge and 15 years for the conspiracy. Alice Willis was released on the 16th of September, 2001, after serving just over six years. She now lives in Melbourne, Florida, with her husband and children. She will remain under community supervision until September 15, 2041.

Heather Swallers was charged with second-degree murder and sentenced to seven years. However, Heather Swallers testified against others and provided the court with evidence. As a result, she was released on the 14th of February, 1998, after serving almost three years, making her the first to be released from custody. She now resides in Georgia with her children.

In 1998, Jim Schutze wrote a book based on the Bobby Kent case called  Bully: A True Story of High School Revenge. Three years later, the book was adapted into a film by Larry Clark, also called Bully, which starred Brad Renfro and Nick Stahl.

What did Bobby Kent do to his friends?

It was reported that Bobby Kent had bullied his friends. He had repeatedly physically and mentally bullied Marty Puccio for years. Bobby Kent also sexually assaulted Alice Willis, who he dated for a few weeks, as well as another female from the group.

Where is Alice Willis now?

Alice Willis was released on the 16th of September, 2001, after serving just over six years. She now lives in Melbourne, Florida, with her husband and children.

Where is Lisa Connely now?

Lisa Connely lives in Pennsylvania with a daughter from her relationship with Marty Puccio and a younger son.

Where is Marty Puccio now?

Marty Puccio is serving life in Desoto Annex in Arcadia. A judge reduced Marty’s sentence from the death penalty to life.