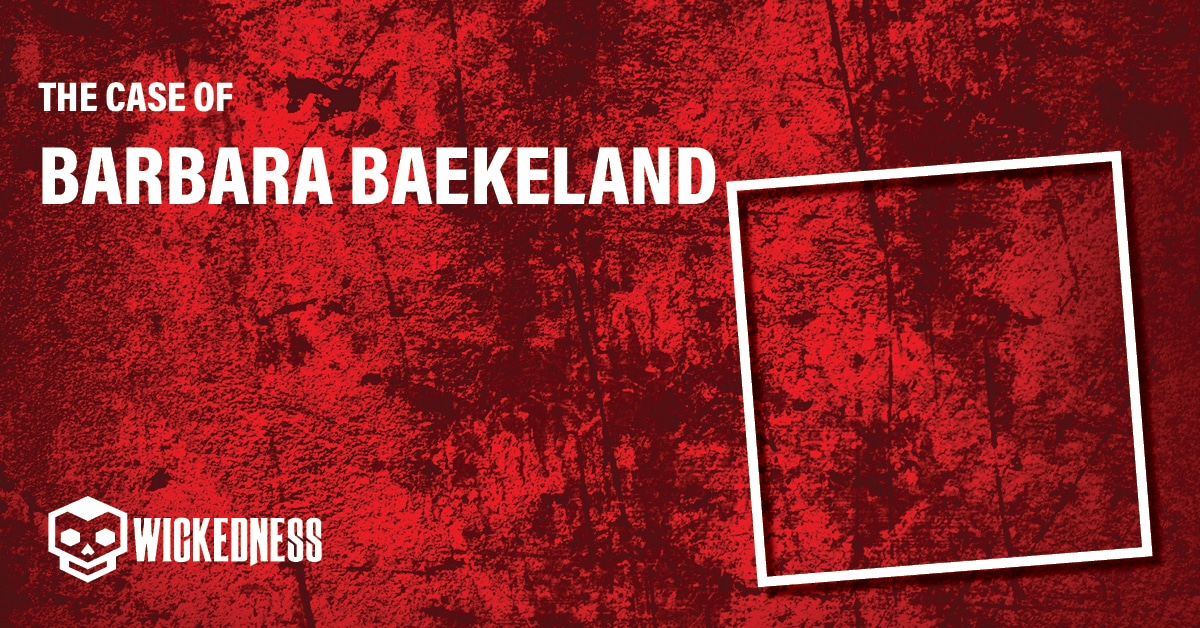 Who Was Barbara Baekeland?

Once named one of New York City’s ten most beautiful girls, Barbara Daly, born in 1922, met and married socialite Brooks Baekeland. Barbara Daly Baekeland, an American socialite herself, had made a living posing for paintings and modeling in well-known magazines like Vogue. Because of her high social status, Barbara received invitations to many gatherings of people of wealth and stature. At these parties, Barbara often met wealthy men who didn’t mind taking her out for dinner and a date.

Barbara and Brooks, a trainee pilot, met when Barbara did a screen test in Hollywood. Unfortunately for Barbara, the screen test did not spawn a film appearance but did land her a beau. Brooks Baekeland was the type of man Barbara found attractive. Handsome and wealthy, Brooks was the grandson of Leo Baekeland, creator of Bakelite plastic.

After the couple married, they settled in an apartment on New York’s affluent Upper East Side in a luxury apartment. Famous actress Greta Garbo and talented playwright Tennessee Williams were frequent guests of the lavish parties the Baekelands threw. They gave the apperance of a happy American family; at first.

Before their marriage, Brooks was unaware of Barbara’s struggle with mental illness and emotional issues. But, as their marriage progressed, Barbara’s evidence of her conditions began to appear. As a heavy drinker, the alcohol would only increase Barbara Baekeland’s erratic behavior. Once acting impulsively, Barbara entered a car filled with four male strangers after an argument with her husband. Brooks and Barbara both partook in extramarital affairs throughout their entire marriage.

The Baekelands had weird ideas of what a party game was. Instead of treating their guests to a round of poker, Barbara Baekeland would make all the male guests stand behind a screen and strip off their underwear. Women in attendance would then have to sit and guess which bared bottom belonged to which male attendee.

Despite the couple’s odd behavior and rude outbursts, they were still popular, and everyone wanted to attend a Baekeland party in their extravagant apartment. Usually, after a woman has a baby, she relaxes and her partying days slow down but not Barbara Baekeland. In 1946 after giving birth to her son Antony or Tony Baekeland, Barbara didn’t change her luxurious lifestyle one bit.

Brooks attempted to leave Barbara Baekeland several times after the birth of their son. After each conversation, Barbara Baekeland would try to commit suicide, causing Brooks to end the affair and stay with her. The vicious cycle kept repeating itself until, in the mid-sixties, Brooks followed through on his divorce and left Barabra.

Relationship Between Mother and Son

Tony Baekeland, born on August 28, 1942, was an average little boy whose mother wanted him to be extraordinary. Barbara Baekeland would get frustrated with Antony for not excelling in everything she had him do. He was intelligent, polite, and well-mannered, but that didn’t matter to Barbara. Her son needed to be the best musician, the best writer, the best at everything. Despite Antony constantly letting Barbara down there was close relationship between mother and son.

Although Barbara Baekeland wanted Antony to be a gifted child, she refused to spend time with him or teach him the things she wanted him to learn. The nanny would care for young Antony until Barbara had company over the house and tried to show him off. Friends have recalled Barbara using Antony to read erotic literature aloud to them during a dinner party in French. When Antony struggled with the french words, Barbara flipped out on him and her dinner guests. Concern among family friends began when young Antony showing sadistic behavior by torturing animals. He would remove the legs from live crabs and wings from insects.

In the early 1960s, when Antony was a young man, people did not accept homosexuality. Some areas still considered it a mental illness or against the law, so it wouldnt have looked good for Barabra and Brooks if their son came out as gay. But Antony did come out as a homosexual much to the dismay of his parents.

Brooke began referring to Antony as “Barbara’s son” after Antony told him he was gay. The news of Antony’s homosexuality also broke Barbara Baekeland’s heart. She would supply Antony with endless prostitutes to try and cure him of his infliction.Barbara assumed Antony’s sexuality was what made them a dysfunctional family.

In 1967 while living in Spain with his mother, Antony, now 21, began an affair with an Australian man named Jake Cooper. Jake, who was bisexual and had a girlfriend lived on a commune with people who partook in hallucinogenic drugs. Antony fell deeply in love with Jake during his time in Spain, and Jake, a poor hippie, enjoyed the lavish gifts Antony would buy for him.

A friend of Barbara Baekeland’s had seen Antony with Jake, so she phoned Barbara, in Switzerland at the time. The news of her son and Jake disturbed Barbara, and she returned to Spain as soon as possible to rescue Antony. Barbara planned to bring her son back to Switzerland with her, but when authorities stopped them at the border, Antony didn’t have his passport. Because of this mishap, the pair had to spend the evening in jail.

It didn’t seem as if Barbara Baekeland was just out to destroy Antony’s homosexual relationships because she drove her off when he brought a female home. Initially, Barbara was thrilled that Antony was dating a woman named Sylvie. At a dinner with Sylvie’s parents, Barbara pushed to couple to marry immediately; she couldn’t wait for this union to begin.

Unfortunately, before Sylvie had a chance to fall in love with Antony, she fell in love with his dad, Brooks. Still married at the time, when Barbara found out about the affair, she tried to kill herself again. But this time, Brooks didn’t stay to help her; he left with Sylvie after she attempted suicide too.

Allegedly right before the divorce, Barbara Baekeland challenged her husband, saying she could help Antony get over his homosexuality. All she would have to do was take him to bed with her. Disgusted, Brooks begged her not to do that, but Barbara wasn’t one to back down from a challenge, even one she gave herself. Disgustingly, incest between mother and son would occur.

The psychiatrist, concerned for Barbara Baekeland’s life, confessed to her he believed Antony might try to kill her. He wasn’t wrong. In July 1972, Antony threw Barbara into oncoming traffic near their penthouse in Chelsea, London, near Cadogan Square. The fact that Antony was weak and small saved Barbara’s life. After his arrest, Barbra went to the police station and bailed him out of jail, taking her would-be murderer home with her.

Antony would finally succeed in his quest to murder his mother on November 17, 1972. The twenty-five-year-old Antony stabbed his fifty-one-year-old mother in the back, killing her instantly. Officers found Antony at the scene when they arrived. He made a full confession to the police questioning him. A judge charged him with second-degree murder and sentenced him to Broadmoor Hospital psychiatric hospital.

The family psychiatrist stated in 1978 that after examining Antony, they determined he was still a danger to society and should remain in the hospital. Antony’s grandmother took a vested interest in her grandson’s case. She felt terrible for what her daughter inflicted on him and thought he would be happier back in the United States living with her.

Brooks vehemently denied this idea. He thought his first son was still a threat, especially to him. Antony’s father did marry his girlfriend Sylvie, and the couple now had a son together. Allegedly Antony sent his little half-brother disturbing and morbid creations he made in woodshop and art classes.

It didn’t matter how many people opposed Antony’s release. His grandmother used the help of high-powered and affluent friends to secure his release from Broadmoore Hospital in July 1980. Antony, now thirty-three, flew immediately out of England to New York City, where his grandmother met him. The two would live together on what would be a fresh start for Antony. His future looked bright…for six days.

Attack on Antony’s Grandma After Release

Nini Daly, Antony’s eighty-seven-year-old grandma, thought Antony behaved very strangely when he arrived at her Bronx apartment in 1980. Antony didn’t sleep and would stay up all night blasting his music. Soon, he began complaining about his grandmother annoying him with her nags.

Unfortunately, Antony still hadn’t learned to deal with his rage and frustration healthily. He attacked his grandma with a kitchen knife. During the assault, Antony broke several of the frail older women’s bones. Nini’s fortunate that none of her stabs wounds were fatal, and she survived this horrific attack.

Police arrested Antony and imprisoned him in the infamous Rieker’s Island prison in New York. On March 20, 1981, security guards found Antony dead in his cell. That day Antony had a scheduled hearing in which he would have received bail. Due to his records from England not arriving in time, the judge canceled the trial. Guards found Antony Baekeland thirty minutes after returning him to his cell. He had suffocated on a plastic bag.

What happened to Antony Baekeland?

After an incestuous relationship with his mother who suffered from mental health issues, Antony stabbed her.

Barbara Daly, a beautiful socialite but combative mother was murdered by her son Antony.

No he commited suicide in March 1981.