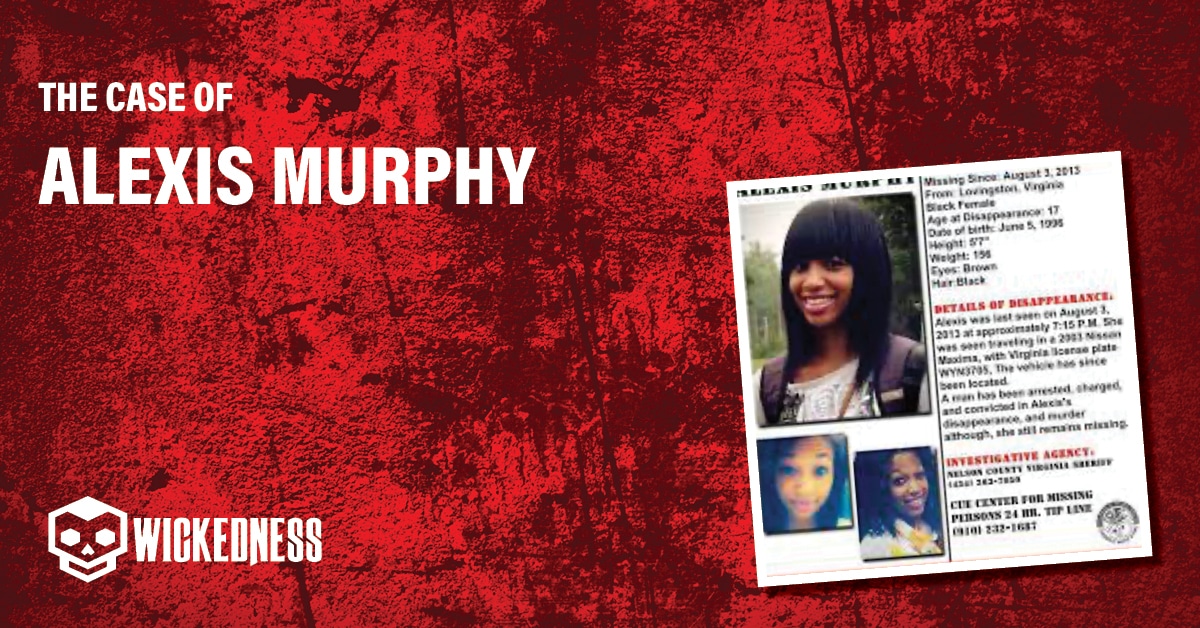 Alexis Murphy went missing in August of 2013; however, it took investigators seven years to recover her body.

Alexis Tiara Murphy was born June 5, 1996, in Charlottesville, Virginia, to parents Laura Murphy and Tory Brown. She had three brothers and, by all accounts, was a very loving sister. In 2013 Alexis lived in a small enclave of Shipman, Virginia, where she attended Nelson County High School and played volleyball. She was a stand-out player and the team captain with ambitions to play at the allegiant level. Shipman is a small area with a population of 500 at the base of the blue ridge mountains.

On the 3rd of August, 2013, Alexis worked at a new business called kid to kid. She returned to her home in Shipman. Alexis had senior portraits coming up and wanted to buy hair extensions for the photoshoot. Alexis left her home in Shipman, Virginia, to travel to Lynchburg to buy some hair extensions. The drive was around 35 minutes, and she had a curfew of midnight that she never missed. At about 7.15 pm, Alexis went into the Liberty gas station in Lovingston, Virginia, Nelson County. Like Shipman, Lovingston is a small town with a population of around 500.

In the early morning hours of Sunday, August 4th, 2013, Alexis’ grandmother notices that she hasn’t made it home yet. Alexis had never missed curfew. If she were ever going to be late, she would phone home and let them know. Her grandmother tries Alexis’ cell phone but gets no response. She then tries Alexis’ mother, Laura, who was still at work after working nightshift. Laura calls Alexis’ dad Troy who was working out of the town at that time. They all made multiple attempts to contact Alexis’ cell phone, but Troy panicked when it kept going to voicemail and told them to call the police immediately.

When Laura left work that Sunday morning, she went to the Nelson County Sheriff’s office to file a missing person report on her daughter. Police Lieutenant Billy Mays worked the case and was immediately concerned about Alexis’ extensive social media presence. According to Billy, It’s a breeding ground for predators, and it is especially troubling that she was posting about where she was going.

Alexis never made it to the store where she had planned to buy hair extensions.

Her family decided to use the app find my iPhone, which is common on all apple phones. The location led them and police to a 4,800-acre estate in Arrington, Virginia, called Oak Ridge Estate. Sheriffs and FBI agents combed the area in cars and helicopters, but the search was a dead end.

On the 5th of May, investigators obtained Alexis’ cellphone records. These records determined her last known ping came from the Liberty Gas Station in Lovingston, Virginia. It also showed that her last activity on her cell phone was at 7:17 pm.

The next day a state-wide bulletin was issued for Alexis Murphy. The same day the white Nissan she was driving is discovered in the parking lot of a theater in Charlottesville, about 40 miles north of Shipman and 70 miles north of Lynchburg. The theater was in the opposite direction than she was meant to be going. K–9 units were used to find a scent on the car. They lead police to Arden place apartments.

Security footage from the gas station confirmed that Alexis was there at around 7 pm. According to Billy Mays in the video footage, she didn’t appear to be under any distress, and she was alone. The footage also shows a male in the gas station in his 40s. He holds the door for Alexis as she leaves and has a visible neck tattoo. They left at the same time and were talking briefly in the car park.

The surveillance footage for the theater car park shows the white Nissan pulling in about 25 hours after Alexis was last seen at the gas station. Unfortunately, the video footage is grainy, and investigators were unable to determine who was driving the vehicle. There was little DNA evidence found in the car.

The man in the surveillance video from the gas station was identified as 48- year- old Randy Taylor.

A security camera in the gas station parking lot showed Alexis’ white Nissan following Randy Taylor’s camo truck along Route 29 toward Charlottesville. Investigators discovered that Randy lived in a camper just off of Route 29, and 4 days after Alexis’ disappearance, Billy Mays went to the property. He denied knowing Alexis Murphy. Investigators obtained a warrant to search Randy’s home, where they found a torn fingernail, black hair extensions, and diamond stud. DNA later matched the evidence to Alexis. Her cell phone was found smashed 70 feet away from Randy’s trailer. There was circumstantial evidence. 48-year-old Randy Taylor was arrested.

Before the trial, Randy was offered a deal. The deal was that if he told the family where Alexis’ body was, he would receive a 20-year prison sentence. He refused. He said he would do it if his sentence were lowered to 10 years.

The murder trial for Alexis Murphy began in May 2014 at the Nelson County courthouse. Randy Allen Taylor was found guilty of abduction and first-degree murder. He was sentenced to two life terms in prison. It was one of few cases to move forward with a murder charge without a body.

After being reported missing in 2013, Alexis Murphy’s remains were finally found on the 3rd of December, 2020, 7 years later. Her remains were found in Lovingston, on private property near Stagebridge Road along Route 29.

Did they ever find Alexis Murphy?

On the 3rd of December 2020, 7 years after she went missing, Alexis’ remains were recovered, on private property near Stagebridge Road along Route 29, in Lovingston.

Who is Randy Allen Taylor?

Randy is serving two life sentences for the abduction and first-degree murder of Alexis Murphy.

Who was Alexis Murphy?

She was a 17-year-old high school student attending Nelson County High School. She was also the captain of her volleyball team and had dreams of playing professionally.