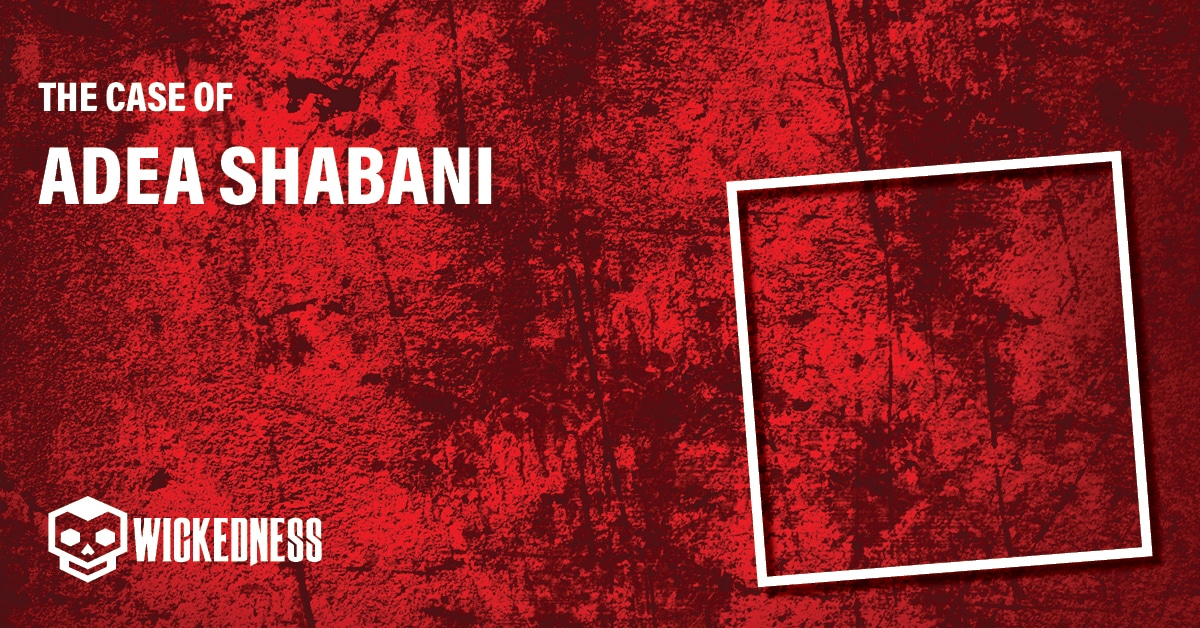 Adea Shabani disappeared without a trace and a month later her body turned up buried in a shallow grave. The only suspect committed suicide before giving any clues.

Adea Shabani was born in Macedonia, Yugoslavia, on March 16, 1992. She was an engaging woman aspiring actress who from a very young age wanted to belong to the world of entertainment.

In pursuit of her dream and after finishing high school in Macedonia, she moved to Hollywood, Los Angeles, California, in order to start a professional acting career.

In 2017 she was part of a movie called “All or Nothing”. An independent production where she had the opportunity to showcase her acting talent.

Adea Shabani’s parents describe her as a young dreamer, very focused on fulfilling her dream of being an actress and model, so they were confident that although it would be difficult at first to start from scratch in the United States, it was the place to do it.

What the 25-Year-Old aspiring model and actress didn’t know is that she would become famous worldwide when she became the protagonist of the news story.

Adea Shabani disappeared without a trace, she was last seen on February 23, 2018, carrying her luggage in the apartment elevator.

Her case went viral and she became the star of a true crime podcast after she disappeared without a trace.

Adea Shabani Disappeared Without a Trace

Adea Shabani had entered the world of Hollywood and had been seen sharing with well known artists such as Kanye West. She often posted pictures of them on social media during events related to the industry she wanted to be a part of.

Adea was part of the Stella Adler acting studio, where she took acting classes. She loved attending her classes and was very responsible with them, always arriving on time and not missing any.

However, on the morning of February 26, Adea did not show up for her class. Her fellow actors thought this was very strange, as they had a very important class that Monday that she would be interested in for her upcoming auditions.

Friends of Shabani commented that some of them tried to contact her over the weekend before the class, but she never answered the phone calls.

Since Adea did not attend her class and was not answering calls, they reported her disappearance to the police. The last they heard from her was that on February 23, 2018, she was last seen near her apartment building at a coffee shop.

The case caught the attention of “To Live and Die in LA”, the favorite podcast streaming service of the moment and its creators joined the police investigation.

On March 27, 2018 many media outlets, including ABC News and NBC News, aired the news conference in which the Nevada County sheriff’s stated that Adea Shabani’s lifeless body was found in a shallow grave outside Sacrament.

On February 26, 2018, after Adea Shabani’s friends reported her missing, the police went to her apartment, which was unlocked. This struck them as highly unusual, so they began to search the entire apartment.

They found her laptop, which indicated that it had been used the Friday before, but there was no other sign that could indicate where Adea was.

They then requested the video camera recordings from the apartment building where Adea lived. There is a moment on video showing Adea coming down in the elevator carrying two suitcases of luggage on Friday, February 23, 2018.

Adea was not alone, she was in the company of a man, who was later identified as Christopher Allen Spotz. In the video, it can be seen that Cristopher was wearing a baseball cap.

That moment on video, was the last time they could see Adea alive. They also checked her cell phone and although it was turned off by the time the couple was in the elevator, they could see that the last message sent by Adea was to one of her friends, asking her where to get some red candles she wanted to buy.

Chris Spotz and Adea met in acting school, they both shared classes in the same acting studio, however, they kept their relationship a secret, since he didn’t want even his classmates and teachers to know.

After seeing that Adea was with Chris that Friday, he became the prime suspect and they went to question him. Christopher confirmed that he had indeed picked her up at her apartment on Friday, February 23, 2018.

According to Chris, they had planned a road trip to her father’s house in Northern California, however, they never arrived at their destination, as they had some insightful conversations, which ended in an argument.

Chris told the police that she got out of the car in Santa Clarita, approximately 25 miles from the apartment where she lived. After that, he went on his way and never saw her again.

While the police were doing their job, several private detectives hired by Adea’s family were also on the lookout for any clues that might lead them to where she might be.

At the same time, a private investigator gave details to the creators of a podcast called “To Live and Die in LA”, which later revealed many important facts about the case of Adea Shabani’s disappearance. This podcast is available on Apple Podcast and various websites.

After several investigations, police discovered that Chris Spotz was engaged to another woman while in a relationship with Adea. This woman was identified as Mary Elmalak.

According to some information obtained through the podcast and Mercury News, Chris had several years of relationship with this woman and Adea was aware of it.

33-Year-Old Chris Spotz and his fiancée Mary Elmalak decided to take a road trip to her family’s home in Colorado and left Los Angeles on March 1, 2018. In light of the fact that Chris was the prime suspect, all investigations focused on him, which is how they discovered that Chris’ car had been stolen.

The police alerted all authorities in California and several states across the country with the details of Christopher Spotz and his Toyota Tacoma pickup truck. At this point, all authorities knew that this was the primary suspect in the Adea Shabani disappearance case.

On March 22, 2018, authorities were notified that the car they were looking for was located in San Bernardino, California. Chris was inside the vehicle and upon realizing that police were pursuing him, instead of turning himself in he accelerated the car, which ended in a police chase.

The 60-mile car chase ended tragically when they were able to stop him in Corona, California. Christopher shot himself in the head before the police were able to arrest him.

It was later reported that Chris was not alone in the vehicle, however, the identity of his passenger is unknown.

With the death of the sole and prime suspect in Adea Shabani’s disappearance, there was no opportunity to ask him any more questions that could give detectives more information about the case.

Searches continued despite the death of Chris Spotz. On March 27, 2018, homicide detectives involved in the case found the lifeless body of Adea Shabani.

The body was inside a slightly deep grave in a wilderness area near the foothills of the Sierra Nevada Mountains.

Christopher Spotz earned his bachelor’s degree in psychology from the University of Northern Colorado in 2009. After graduating, he moved to Los Angeles to begin his acting career.

Upon arriving in Los Angeles, he enrolled in the same acting school where Adea was attending, where he met her.

Spotz had small acting parts in several short films between 2015 and 2018.

Investigations following her suicide, revealed that days before Adea’s disappearance, Christopher had asked her to go with him to his uncle’s funeral in Colorado.

However, it was discovered that his uncle had not passed away, nor was he even ill. It is presumed that it could have been his plan to murder her.

Many Questions Without Answers

After finding the body of Adea Shabani, William Hayes, the captain of the Los Angeles Police Department, reported that there was no data that could corroborate the statements given by Christopher Spotz when he was interrogated.

LAPD declared Chris Spotz guilty of the murder of Adea Shabani, considering it a closed case.

To date, it is not known exactly what happened between Adea Shabani and Chris Spotz, neither how the exact date of her murder nor the conditions under which it occurred.

Who was Adea Shabani?

Adea Shabani was a 25-year-old aspiring actress and model who went missing in February 2018 and was later found dead a month later.

What happened to Chris Spotz?

Chris Spotz committed suicide by shooting himself in the head after a police chase.

It could never be corroborated that Chris Spotz was the murderer of Adea Shabani, since he committed suicide. However, after investigation, LAPD found him guilty of the murder.