Online personality tests promise to give an insight into your true self. One of such tests is the ‘Murderous Villain Test’, which lets you compare your personality with 20 vicious dictators and terrorists. 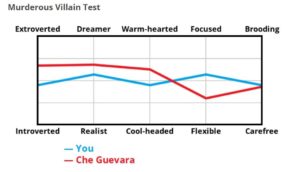 The Murderous Villain Test was devised by IDR Labs International and consists of 45 different questions. As you fill out the information and pick your answers, the computer uses cognitive findings of C.G Jung and a hybrid of ‘Big Five’ measures of personality. On top of this, your tests are also pitted against personality scores with peer-reviewed university studies.

The questions typically record and see how you will react in a certain scenario. These scenarios can range from being completely fictional to real-life based. The algorithm then compares these results and matches it with a certain personality based on their deeds and criminal activities throughout their life.

It can be taken online and is completely free of cost. The authors whose work has fueled the main propaganda behind this test are: W. Pauli, C.G. Jung, C.A. Meier, J.H. van der Hoop, I. Myers, K.C. Briggs, P.T. Costa, M-L von Franz, and R.R. McCrae.

Some common examples of the questions asked in these tests are:

Given below are the two primary pillars on which this test is based: 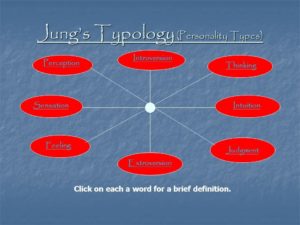 Based on the works by Carl Gustav Jung, this test was a part of his book released in 1921 which categorised personalities into 16 different types. You can find its application in team building and personal development. In this test, the result is solely based on the response that you give to a certain set of questions. These types are:

This involves a personality factor analysis and divides them taxonomically into five traits namely openness to experience, extroversion, agreeableness, neuroticism and conscientiousness. These associations are commonly used to describe human temperament and personality.

Personality tests started surfacing a century ago. Despite the constant developments, they are sometimes plagued with small pitfalls which defy the true personality of an individual. Validity and reliability are the two main things which are required in these tests.

Some researchers even claim that increasing the number of questions raises the accuracy in such tests. In most cases, factors like the environment you take the test in, test duration and your level of honesty is what primarily determines the results.

Since these results are compared to genuine resources and individuals, the results are accurate in most cases.

The murderous villain test compares your answers to the life traits of these 20 human beings. While many of them are world-reckoned, their activities haven’t really been something one can encourage. Here are the 20 murderous villains which might be rooted deep in your personalities.

Which Murderer Has the Highest Number of Killings Under His Name?

The highest number of killings is under the name of Dr. Harold Shipman, who also goes by the moniker Dr. Death. It is believed that he has killed 218 people. In theory though, he was only convicted for 18 of those murders. He was arrested in 2000 and committed suicide in prison in 2004.

What is the Most Accurate Online Personality Test?

The Myers-Briggs Type Indicator is one of the most known and accurate personality tests available online. Similar to the murderous villain test, it gives out results based on behavioural and situational questions.

Is It Safe to Take Online Personality Tests?

Online personality tests can be fun for sure, however, there is one pitfall which often gets overlooked. Many websites gather the data that you input and sell it to various marketing agencies across the web, allowing them to create specialised AdWords. This sort of tracking is an obvious threat to one’s privacy.